It’s not often that a sporting event causes me to get choked up.  I’ve had a few special sports moments in my life.  But July 17, 2013 surpassed them all.  It wasn’t a championship game.  It didn’t feature a legendary player or create a moment in sports history.  It wasn’t even a game that mattered in the standings.

But it mattered to me.

I was at Harry’s Bar.  I don’t drink, and bars are not where you will usually find me.  But Harry’s Bar in Detroit is just a couple blocks away from Cass Technical High School.  No, I wasn’t waiting for kids to get out of school.  It’s July, and my kids are well beyond the high school age.

I was at Harry’s Bar because I was joining the supporters groups – The Northern Guard Supporters , The Motor City Supporters, and Le Rouge Supporters.  It’s the pre-game tradition since the team’s first match last year, for Detroit City FC fans.

Detroit City FC is a soccer team.  They play in the National Premiere Soccer League, and just wrapped up its second season.  The team went undefeated during the regular season – eleven wins and one draw – beat AFC Cleveland 3-1 in the semi-finals, but was eliminated from the playoffs over the weekend by the Erie Admirals on our home pitch at Cass Tech Stadium.

Wednesday, July 17, 2013 was the final match of the season.  A friendly[i] against the Windsor Stars from the Canadian Soccer League.  The general mood was upbeat, subdued from the vibrant energy that filled Harry’s prior to the playoff matches over the weekend. 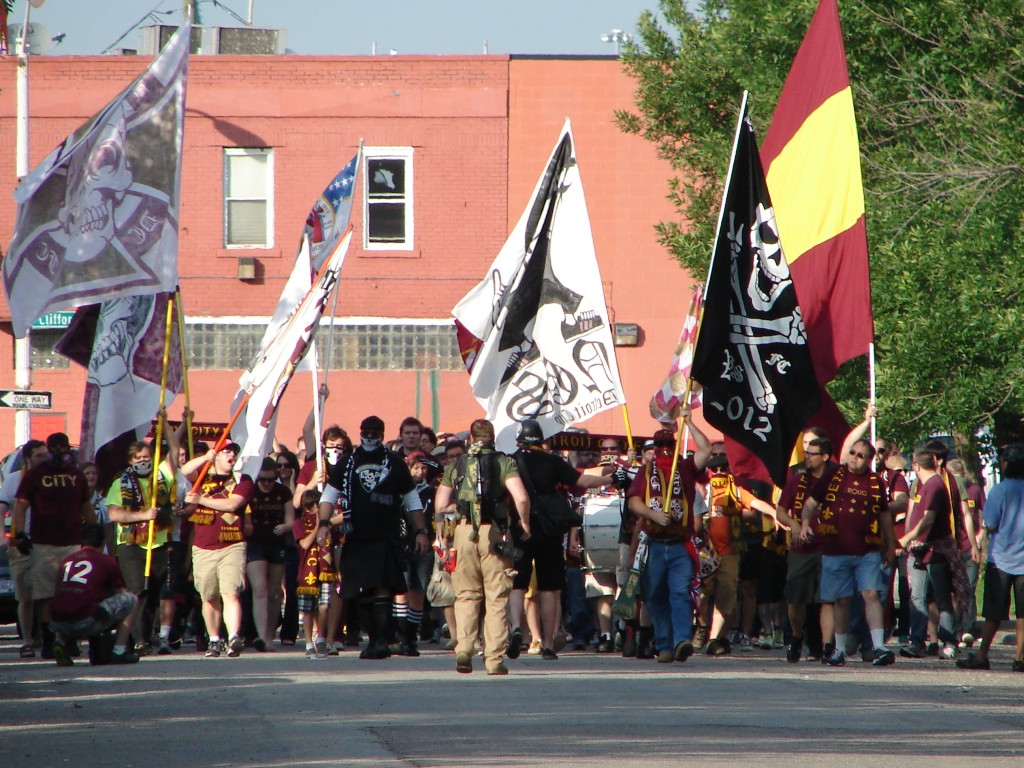 I must pause a moment here to clarify.  I haven’t considered myself qualified to call myself a supporter.  Yes, I’ve been to every DCFC match over the two years.  Yes, my bank account has seen many hits from the DCFC souvenir stand and my wardrobe has become very rouge and gold.

Yes, I have photographed every match, including the torrential downpour we experienced playing FC Sparta Michigan at Cass Tech, which threatened the functioning of my six year old digital camera.

Yes, I consider myself City Til I Die.  But the first season I stuck to the “family-friendly” side of the stadium in order to photograph and video not only the players but the Supporters that filled the west side bleachers with their singing, chanting and smoke sticks.  They were as much the entertainment as the beautiful game being played on the pitch.  It wasn’t until last year, the last game (also a friendly against Windsor) that I did the routine of Harry’s Bar, march to the stadium, and hang out on the Supporters’ side of the field.

This evening, we gathered in the parking lot, as normal.  Sgt. Scary had an announcement.  After the loss on Sunday, the Erie players ran over to taunt the Supporters section (instead of celebrating with their team and the handful of fans that made the trip to Detroit).  It caused a handful of boneheads from the section to toss empty plastic water bottles at them.  As a result, Erie complained to the NPSL, who contacted Detroit Public Schools (DPS).  The Supporters were told that DPS officials would be at the game, to observe the Supporters behavior.  Therefore, the Supporters were going to show DPS and the league what they would miss by not having the Supporters there.

We began with a silent march to the stadium.  No chanting.  No drumming.  No smoke.  The residents of the neighborhood were confused.  They asked us why we weren’t singing.  They wanted, and almost demanded the group to perform, as it had become something they looked forward to every DCFC match day.

We entered the parking area between the school and stadium, where the usual chant would be made:

We don’t hear a fucking thing!

This evening we stood in silence.

Then we entered the stadium, where things became humorous and surreal.  The Supporters filled the west stands.  The chants and songs were altered.  As the teams waited in the tunnel on the opposite side of the field, the first chant to emerge was The Barney Song.  Then, instead of chanting “Come and Get It” as a taunt to the visiting team as they walked onto the field, we chanted “Thanks for Coming.”  It only got sillier from there.

When the ball came in to the Supporters section, the norm is to toss it back out on the field.  But this night, the ball would be tossed followed by a chorus of apologies (after all, we’re not supposed to throw anything on the field).

There was even a chant of “You’re the Greatest Ref, We’ve Ever Seen”

Then, at the 20 minute mark of the first half, the always standing, always chanting Supporters, in unison, sat in silence.  For ten minutes.  It was eerie.  You could hear the players shouting to each other.

At the end of the first half, the Supporters wanted to continue to make the statement of what a DCFC match would look like without them.  We picked up and moved to fill a section on the “family-friendly” east side, leaving the Supporters’ Section near empty.

When the second half begun, the usual nursery rhymes and generic sports chants continued.  At the 70th minute, DCFC captain Josh Rogers, spoke with the leaders of the Supporters, telling them to “get the fuck back to your side of the field” and make some noise.  They (the players) wanted the cheering and wanted to thank the Supporters for their support during the season at the conclusion of the game.  Sgt. Scary was going to wait until the 80th minute to march back, however a young woman’s voice from the section shouted, “Back to normal!” and the Supporters created a mass exodus from the family friendly side, chanting and singing all the way back to the west bleachers.

It was an explosion of pent-up, enthusiastic and authentic support for this team in rouge and gold that we love that commenced.  The chants and songs seemed louder.  Smoke filled the stands and field.  All was right with the world once more.

Not being blessed with the gift of athleticism, I’ve been a sports fan for decades.  Mostly hockey and especially the Detroit Vipers of the International Hockey League.  I still wear my Vipers jackets/sweatshirts to this day, my blood running the color of aqua and eggplant.  But the Detroit Vipers dissolved in 2001 and my first trip to Columbus in 2002 to a Columbus Crew match revived my interest in soccer (I was a Detroit Express fan back in the North American Soccer League day).  I photographed for a hockey publication at the Detroit Vipers games, which took me on the ice and in the locker room when they won the 1997 Turner Cup.  I’ve been involved in booster clubs, presiding over the Detroit Jr. Red Wings of the Ontario Hockey League for two seasons.  I was even a member of the Detroit Red Wings For’em Club for a season.  I’ve marched in anti-war and other protests.  But none of that prepared me for what happened this night.

I’ve seen this on television – watching English Premiere League matches and Portland Timbers home games.  I’ve witnessed it at Crew Stadium (in the Nordecke) and the first season of DCFC.  Tonight it became real.  Tangible.  Consuming.  I was not a spectator.  I was not a fan.  I became part of something more.  A culture.  A community where there is a mutual appreciation between the club and the supporters.  Something I’ve not experienced with any team or sport – not even my beloved Vipers.

The transfusion is complete.  The aqua and eggplant blood is gone.  It runs rouge and gold now.  This is my tribe.  I am a Northern Guard Supporter.

[i] A “friendly” is an exhibition match.

One thought on “Forevermore, Rouge et Or”