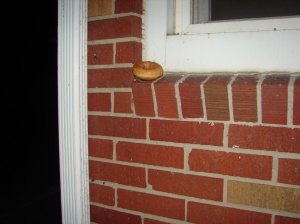 This evening, I took the garbage out to the curb.  On my way back to the house I noticed something odd.

There was a doughnut on the window sill.

I had to pause.  Why is there a doughnut on my window sill?  Who put it there?  When?

It couldn’t have been my mother-in-law, who lives in the small one-bedroom cottage twenty feet from our home.  Her health has been on the decline, most significantly since April.  She is physically unable to make the walk from her home to ours, to place a doughnut on the window sill.  Besides, she would find a better use for a doughnut; she’d consume it.

It couldn’t have been my wife. a self-diagnosed Celiac, who wouldn’t touch a doughnut, let alone put one on the window sill.

But there it is.  A doughnut.  On the window sill.  A most unusual combination.

It seemed an odd place for a woodland creature to place it.  Upon close inspection, it is a complete doughnut, without teeth marks or bites taken from it.

It certainly couldn’t have jumped up there on its own.  It did not run or jump down or fly away as I approached it.

Just a doughnut.  On the window sill.

The more I thought about it, the deeper the mystery.  It had to have been a person.  But who?

Not the letter carrier.  We’re on a rural route where the carrier never leaves her truck to stuff our mailboxes near the street.

There have been no UPS or FedEx deliveries.

There have been no health care professionals in for weeks to tend to my mother-in-law, the window sill being en route to her front door.  She had oxygen tanks delivered recently, but that was well over a week ago.

Who put the doughnut on the window sill?

Why would someone put a doughnut on a window sill?

The mystery became a magnet for my attention.  As I read this evening, the image of the doughnut weaved in and out of the lines on the page; magnified by the fact that it was on the window sill of the room within which I was reading.

I paused.  Thought about it.  Realized that it was like so many unanswerable questions that distract my thinking from my being present.

Things happen that are simply unexplainable.  I have had a rash of such things in the last few weeks; events that have recaptured and interrupted my attention by replaying over and over in my mind.  I could add this doughnut to them.

Or I could recognize it as something that happened, out of the blue, and no amount of thinking, wondering, replaying in my mind is going to change a thing.  Acknowledge it, and move on.

It must have been a Zen Master who left that doughnut on my window sill as a lesson to free me from the stickiness of my mind.

7 thoughts on “The doughnut on the window sill”