I’ve recently written about my favorite book stores – those that carry the latest titles as well as used, rare and old book stores.  But one book store was missing from that lot, because it has been missing from the bookish landscape since 2011 – Borders. 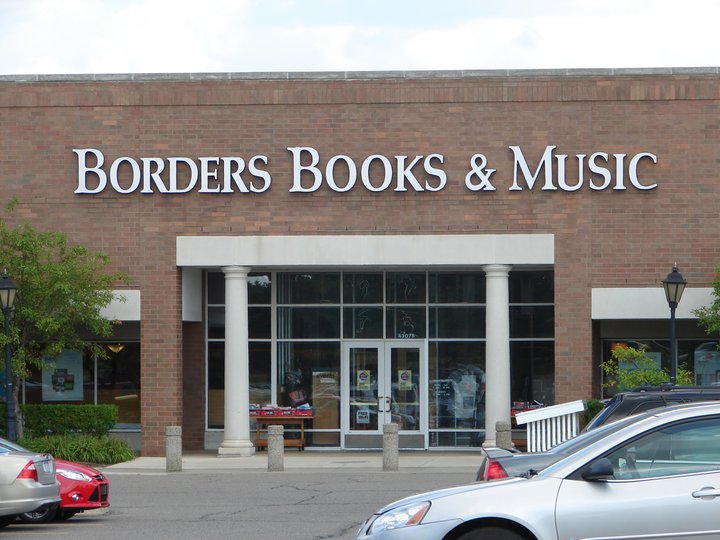 With its demise, I’ve discovered all these wonderful book stores I might not have otherwise.  Borders was my oasis.  My bookish paradise.  Since the early 1990’s, when the Novi store opened, before it became a massive franchise that was big but not too big to fail, it was the place that fostered my reading and writing hungers.

When they closed, I took advantage of it.  If there would be no Borders for me to retreat to any more, to peruse and feel at home in, then I was going to create the space in my home.  I picked up Borders shelves, Borders signs, Borders accessories.  And I was going to turn a room in my house into my Borders Memorial Library.

First, I needed the walls painted the right Borders color.  This red did the trick. 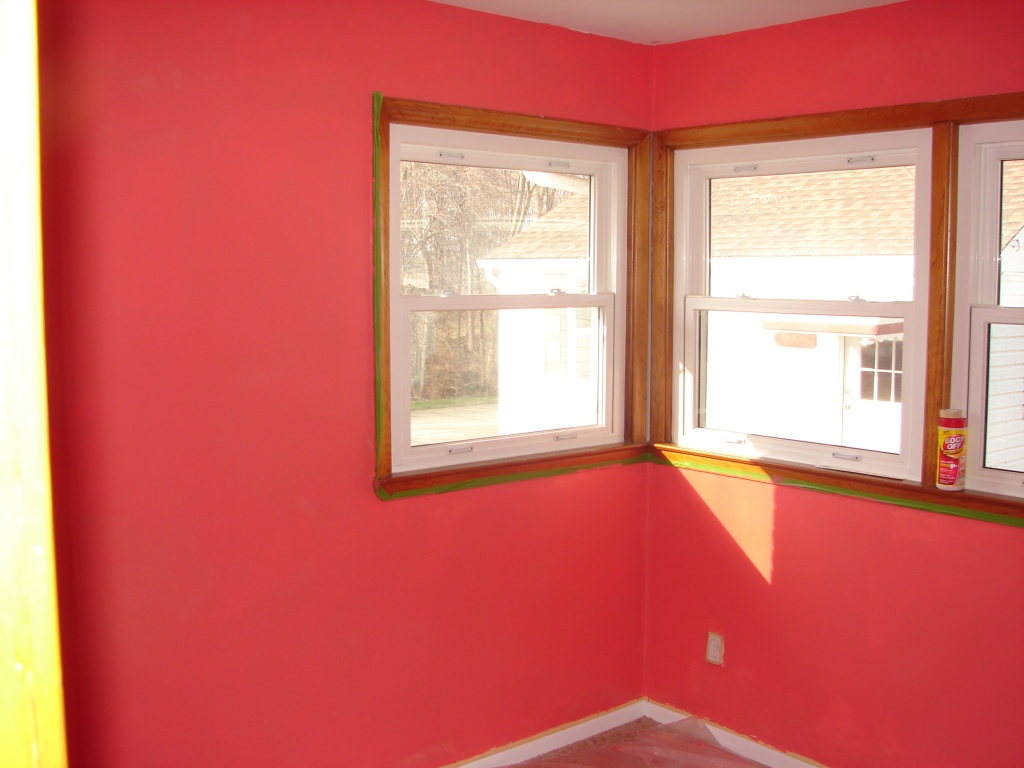 I thought I was set, but upon learning about a treasure trove of old Borders store and office fixtures, I completed the room – or at least as it is now. 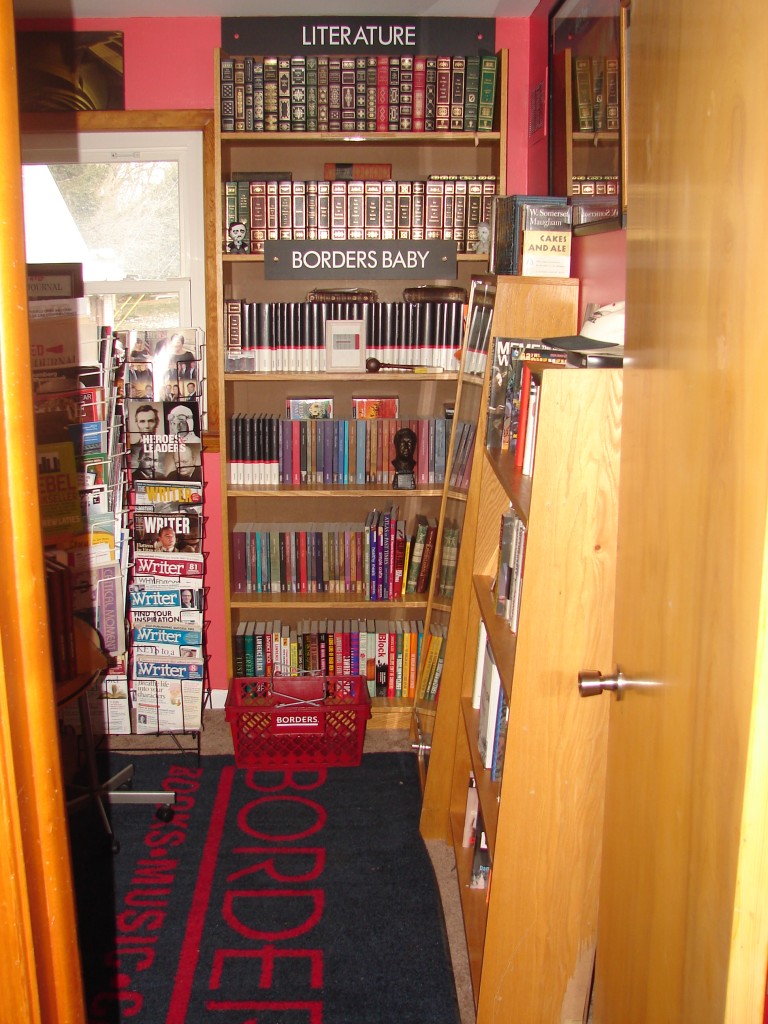 Upon entry is the noticeable Borders rug, with a Borders shopping basket.  The shelves – all from Borders’ stores – holding my library.  Straight ahead on the tall shelf is my collection of Borders Classics.  Leather bound editions, hard cover editions, and soft cover, all published by Borders’ State Street Press in Ann Arbor. 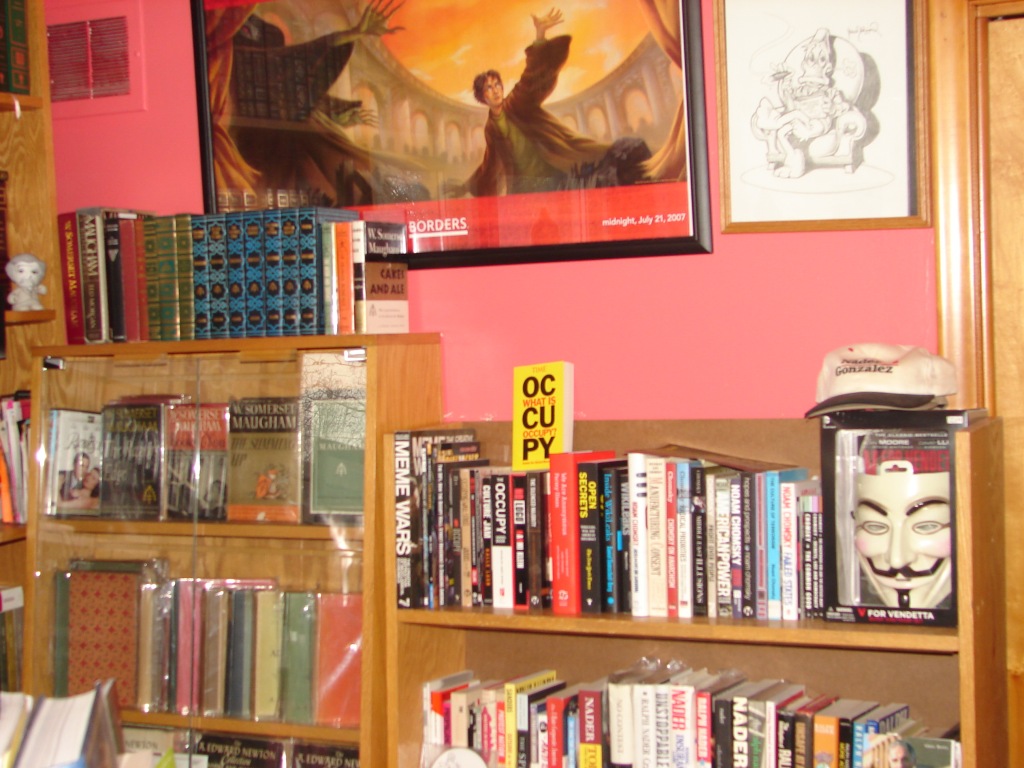 The shelf with the glass doors holds my collection of works by writer W. Somerset Maugham and the writings of A. Edward Newton, a legendary book collector from the early part of the 20th Century.

And yes, the framed poster is the promotion for the release of Harry Potter and The Deathly Hallows at Borders. 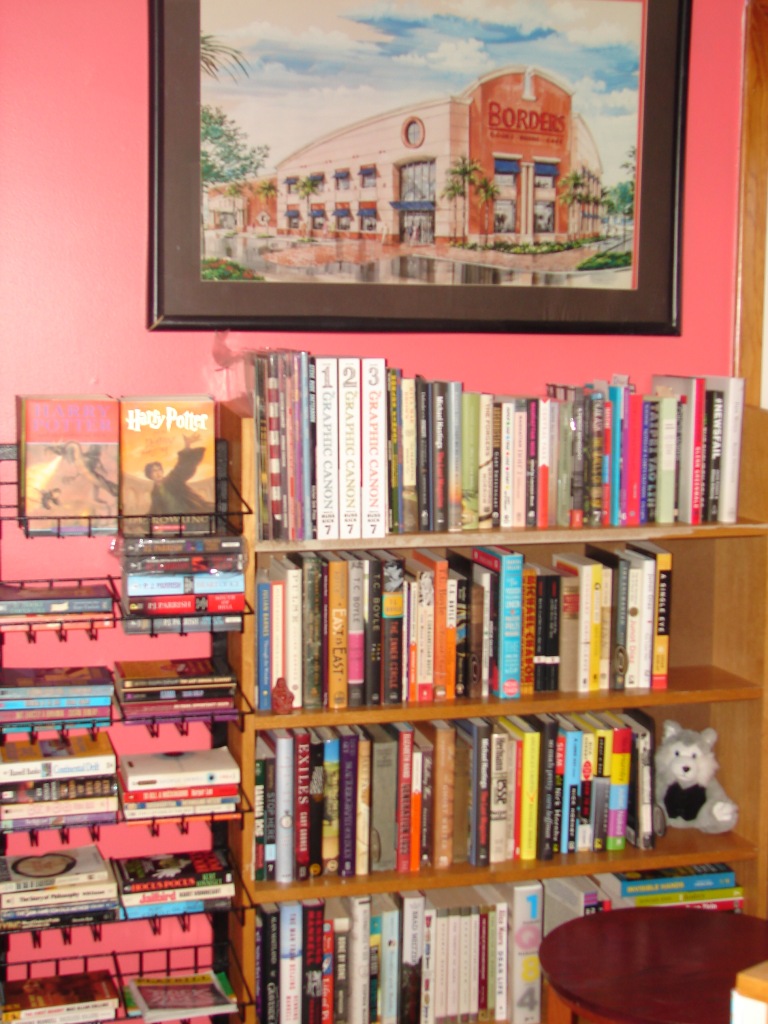 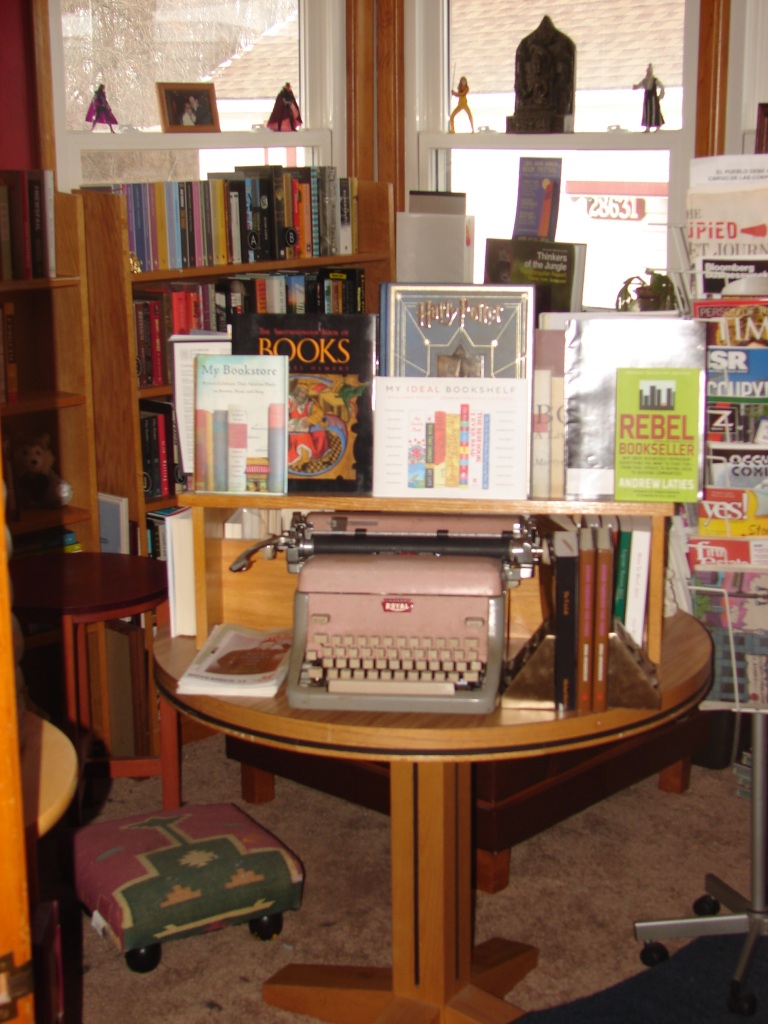 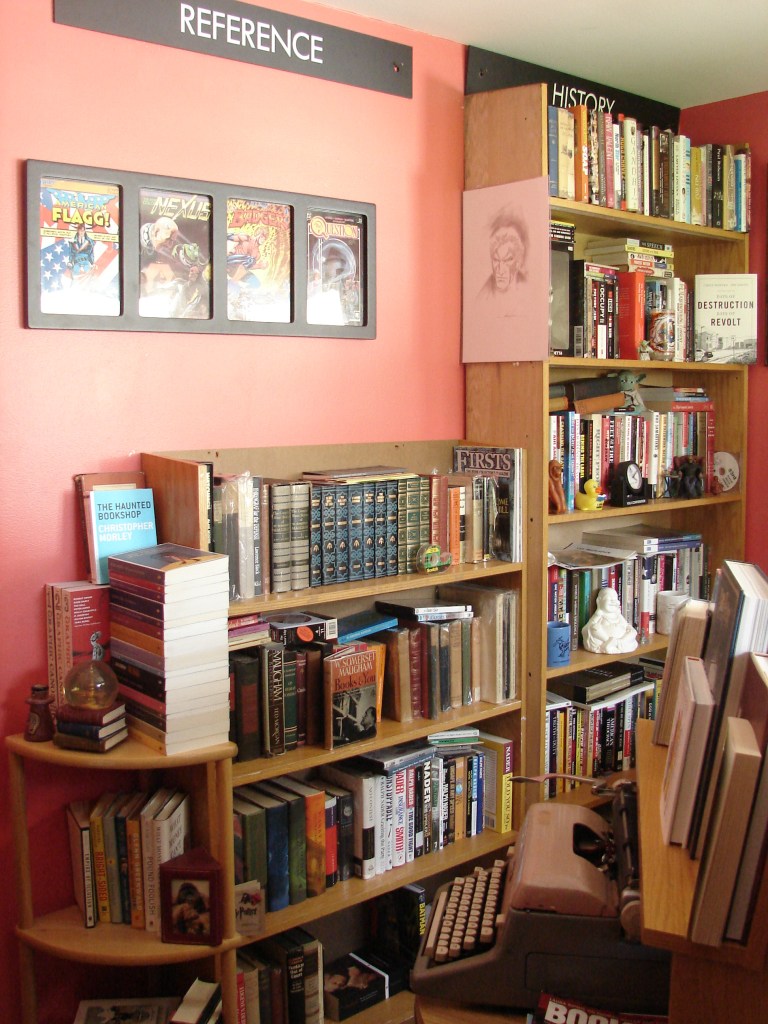 The tall shelf in the corner of the above photo now houses my signed editions. 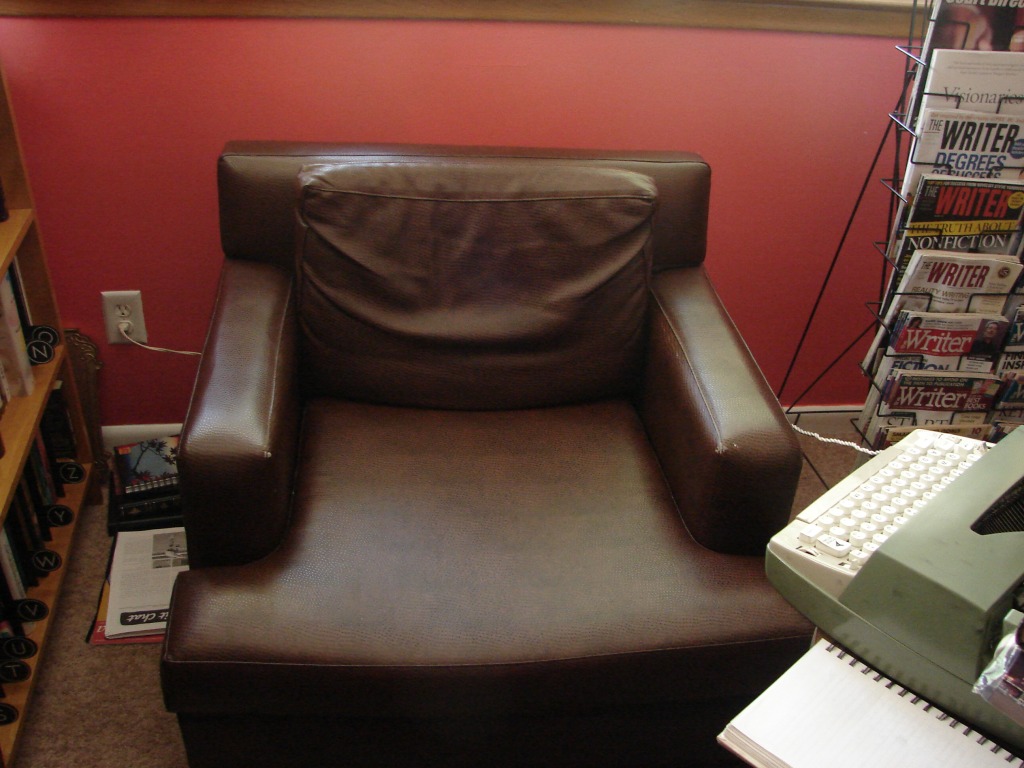 The chair, from the cafe area of the Novi store.

This is my Borders escape.  My retreat.  And with the electric typewriter there, a place to bang out some thoughts when I have them. 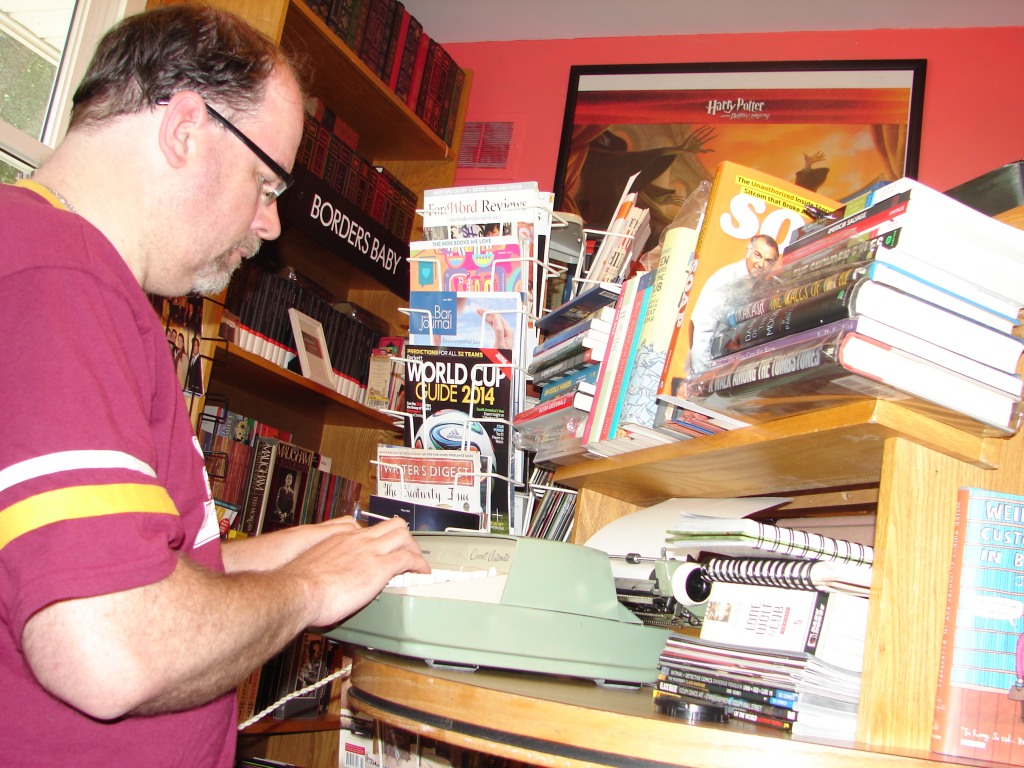 Borders, the business, the book store, may be gone.  But its memory and essence remains a part of my existence.

At the Ann Arbor Art Fair this summer, I came upon the booth of Sarah Bean.  Her artistic talent was in book carving.  She would take your favorite book and turn it into a piece of art.

I know.  At first, a part of me cringed.  How could one take a knife to a book and carve it?  But looking at the display of her work, I was intrigued.  I went back to Ann Arbor the next day, a copy of “The Y in Life” in hand.  I turned it over for her to perform her magic.

Today in the mail the carving arrived.  Framed and beautifully done, it now hangs on the wall outside my office, where I can see it constantly.  “The Y in Life” is now both a literary work of art, and a graphic work of art. 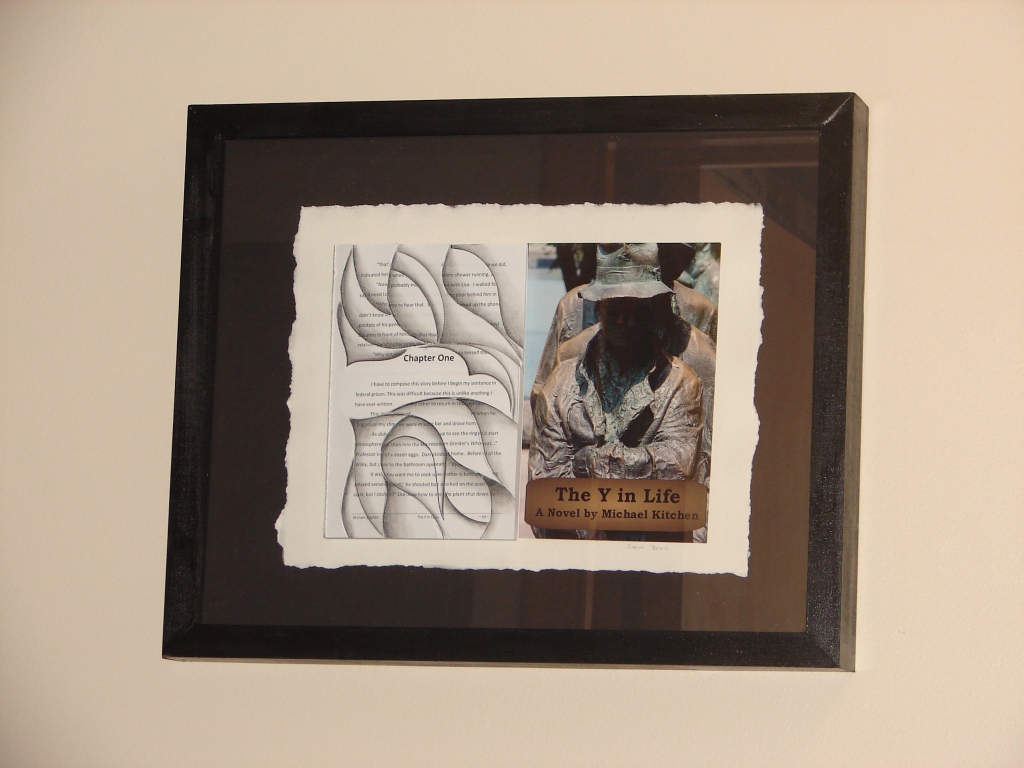 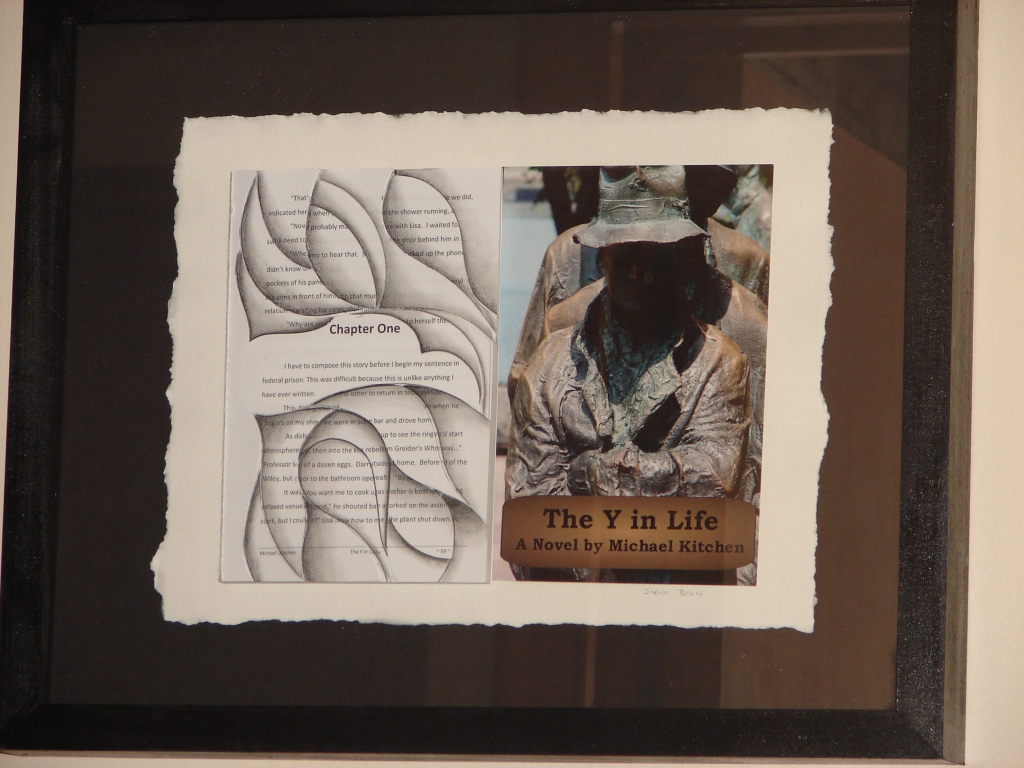 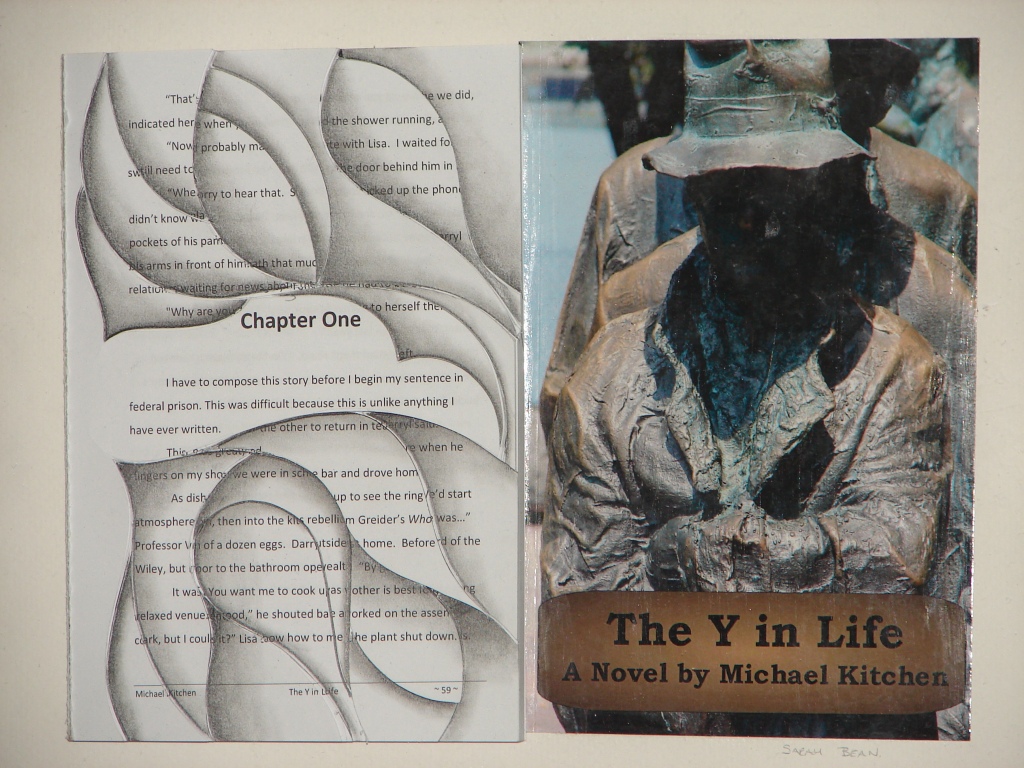 You can see more of Sarah’s work at her website, “The Art And Poems Of Sarah Bean.”