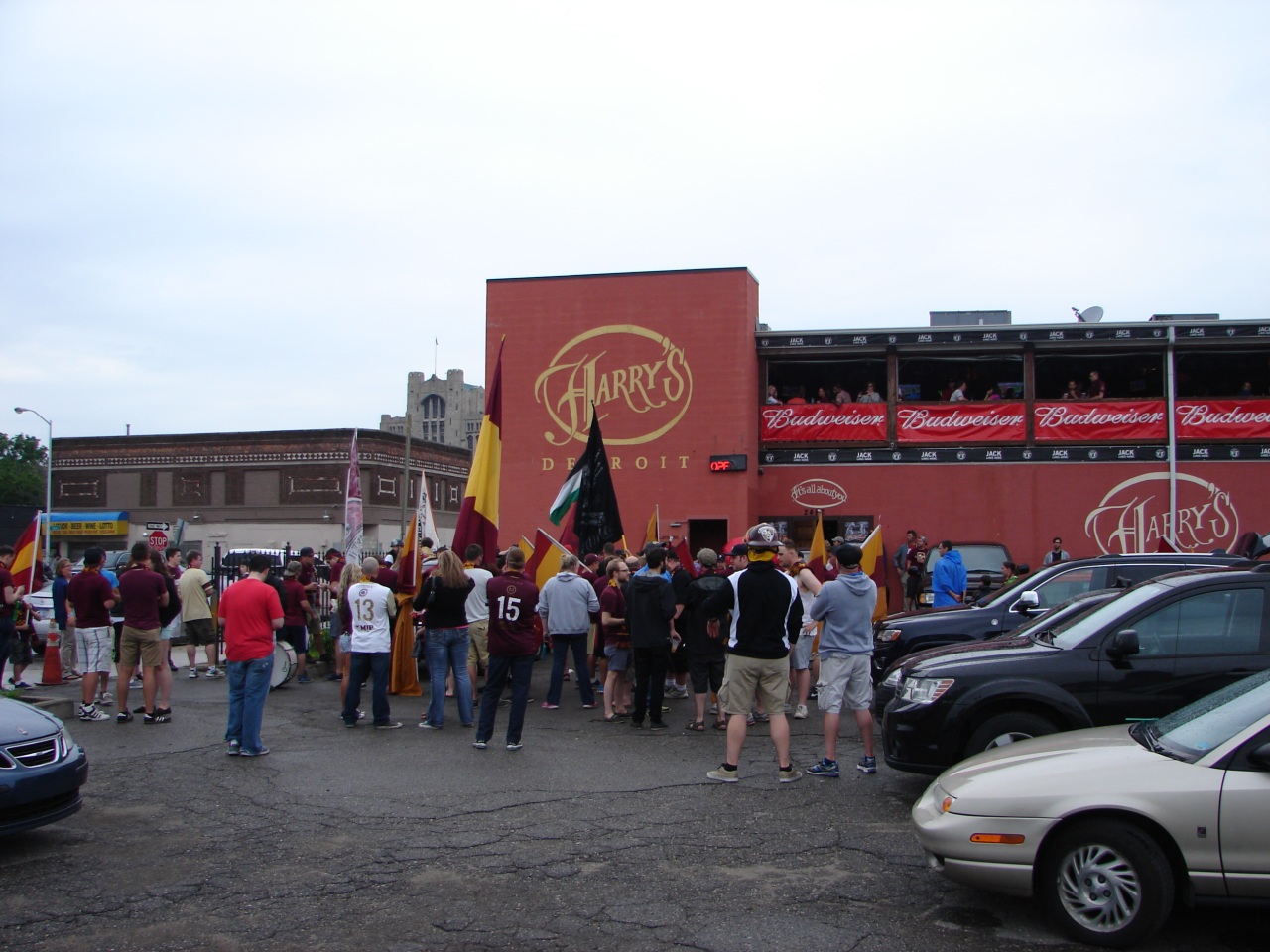 Those of us who are passionate about our city, and passionate about our soccer, who will sing for you, City, who is City Til We Die and will be buried in rouge and gold, are eager for the 2015 season of Detroit City Football Club soccer at Cass Tech Stadium (Estadia Cass Techia) to begin.

But you’re new.  You haven’t tasted City ale, abused your lungs with chanting, singing, and smoke, and you wonder what all the commotion is about.  Here’s a little primer to prepare you for the few hours of outrageous fun that is a Detroit City FC ‘Le Rouge’ soccer match.

Detroit City FC, known as Le Rouge, play in the National Premier Soccer League, a fourth-tier professional league.  The players on the team are unpaid current and past college players.  On May 12, 2012, Detroit City FC took to the its home field for the first time against AFC Cleveland.  Drawing 1,072 fans at its inaugural game exceeded team ownership’s expectations.  The result was a 1-1 draw.  (click on photos to enlarge). 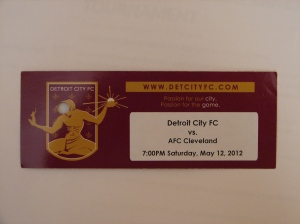 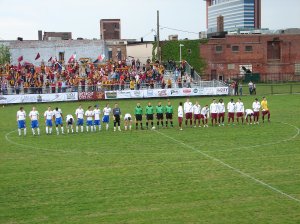 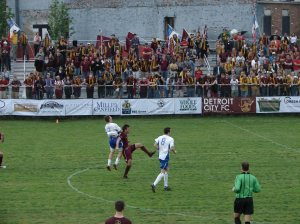 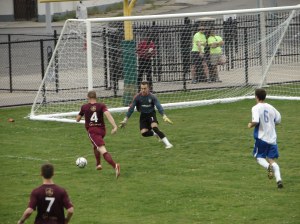 Home is Cass Tech Stadium on the campus of Detroit’s Cass Tech High School.  The Detroit skyline provides a scenic background to the beautiful game played on the pitch.

The 2012 Season saw Le Rouge finish third in the Midwest-Great Lakes Conference with a 5-5-3 (Wins-Draws-Losses) record.  Buzz was created and the team averaged almost 1,300 fans per game, with it’s largest crowd of 1,743 attending the June 23rd match against AFC Cleveland.

In 2013, Le Rouge finished top of the Great Lakes Conference with 11 wins, 1 draw, and 0 losses.  The fan base continued to grow, averaging about 1,485 per game.  As conference winners, Detroit hosted the Great Lakes Tournament playoffs, where Le Rouge defeated AFC Cleveland 3-1 before a crowd of 2,634.  However, the next day, they fell to the Erie Admirals, 4-1 before 2,184 fans.

2014 was another phenomenal season.  With their first place finish they were granted entry in the U.S. Open Cup – the oldest professional soccer tournament in the United States.  On May 7, 2014, DCFC hosted RWB Adria at Livonia Stevenson High School, battling the Chicago-based team from the Great Lakes Premiere League to a 2-2 draw.  Unfortunately, they fell in penalty kicks 3-1.  The regular season record of 8-3-3 put them one point out of first place.  However, the DCFC craze multiplied.  Every match attendance exceeded 2,000 fans, including a couple of sellouts.  The final match of the regular season against the Fort Pitt Regiment brought in 3,398 fans, plus hundreds turned away, having to watch on the outskirts because of the packed stadium.

This year, the season begins with two preseason matches – one on April 18th at Hurley Field in Berkley, the other at Cass Tech on May 9th.  The regular season begins on May 15th.

If you want to get into a game this year, it’s going to be a little more difficult.  The team’s popularity has exploded.  You’re going to want one of these:  A Detroit City FC Season Ticket.

There is good news and bad news.  The good news is that the team has sold out of season tickets.  That’s also the bad news for you, if you don’t have a season ticket.

Your best bet would be to plan ahead.  Either start dating or become friends with a DCFC season ticket holder, who may have an extra seat to spare, or buy your tickets online in advance.   And when I say in advance, I suggest definitely before game day.  As I previously noted, the people who arrived with the intent to buy their tickets at the gate for the final game of the season were turned away because the stadium was full.  Single game tickets go on sale at the DCFC website on March 5th.

For the hardcore fans, the pre-game begins at Harry’s in Detroit.  Harry’s is a bar and restaurant which serves up City Red Ale, a Milking It Productions official brew of the Detroit City Football Club.  There, you will not be able to avoid the rouge and gold, the chanting and drumming of the group known as The Northern Guard Supporters. 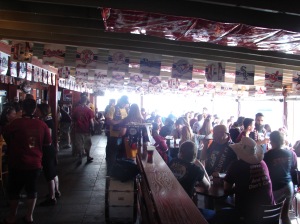 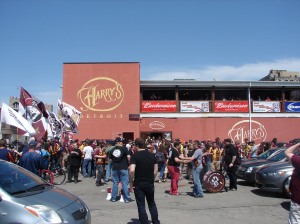 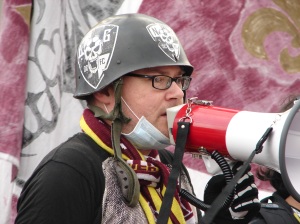 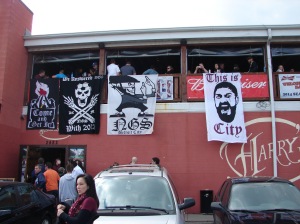 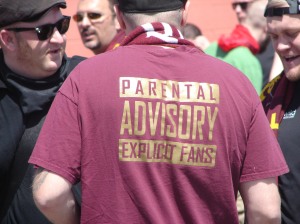 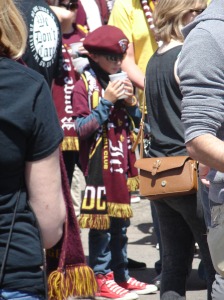 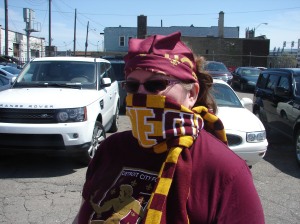 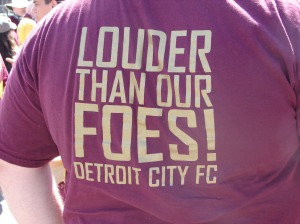 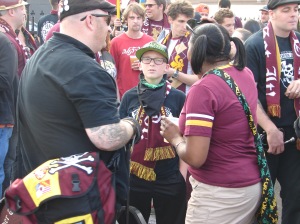 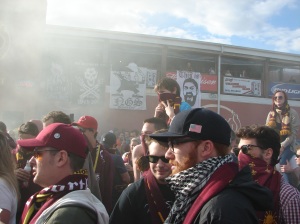 At about twenty minutes before game time, the Guard gathers.  Sgt. Scary leads us….

and then we march to Cass Tech.  It’s a show of force in support of our team.  And the neighbors love it.

Before entering the stadium, there is a pause to serenade the visiting team and their non-existent fans….

Once inside the stadium, you have a choice to make.  Do you sit on the “family-friendly” side or with the Northern Guard Supporters?  The “family-friendly” side are for those fans who wish to sit and enjoy the match.  It is traditionally the “home side” of the field because the stands are larger.  The broadcast booth and the players’ benches are also on that side.  For the 2012 season, this was where I occupied, and it was fun.

Or, you can venture into the Supporter’s Side….. 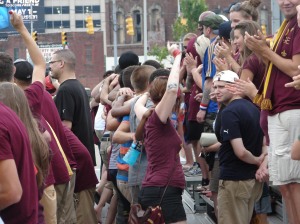 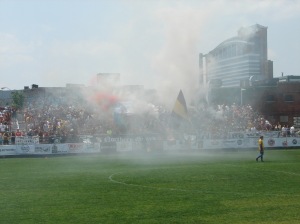 To get a sense of what the experience is like, I wrote about being in this section, with video, HERE.

Intimidated because you might not know the chants?  Not to worry.  They can be found at Boys in Rouge blog (a blog you should definitely follow if you are or want to become a DCFC fan).

Yes, this is our soccer team.  The game on the pitch is what unites us and makes us the passionate fans that we are. 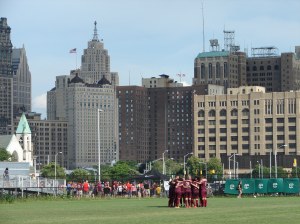 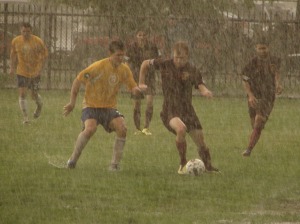 But at a Detroit City FC match, you never know what else may happen.

Tifos have been raised….

Marriages have been performed…

Special jerseys have been worn then auctioned for charitable causes….

The memory of a tragic loss in the soccer community honored…. 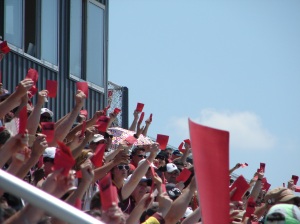 A halftime performance by the Cass Tech HS Marching Band….

A surprise visit by the Detroit Party Marching Band…

And the blue jeans shorts canon.

There you have it.  Anyone can have fun at a Detroit City FC match (unless you’re a player, coach, or fan of the visiting team who usually leave filled with envy and defeat).  Hopefully, this guide has provided you with what you need to maximize your level of fun, after which you will be one of the many passionately feeling, “City Til I Die!”

The atmosphere created by the Northern Guard is so contagious that even the team joins in! 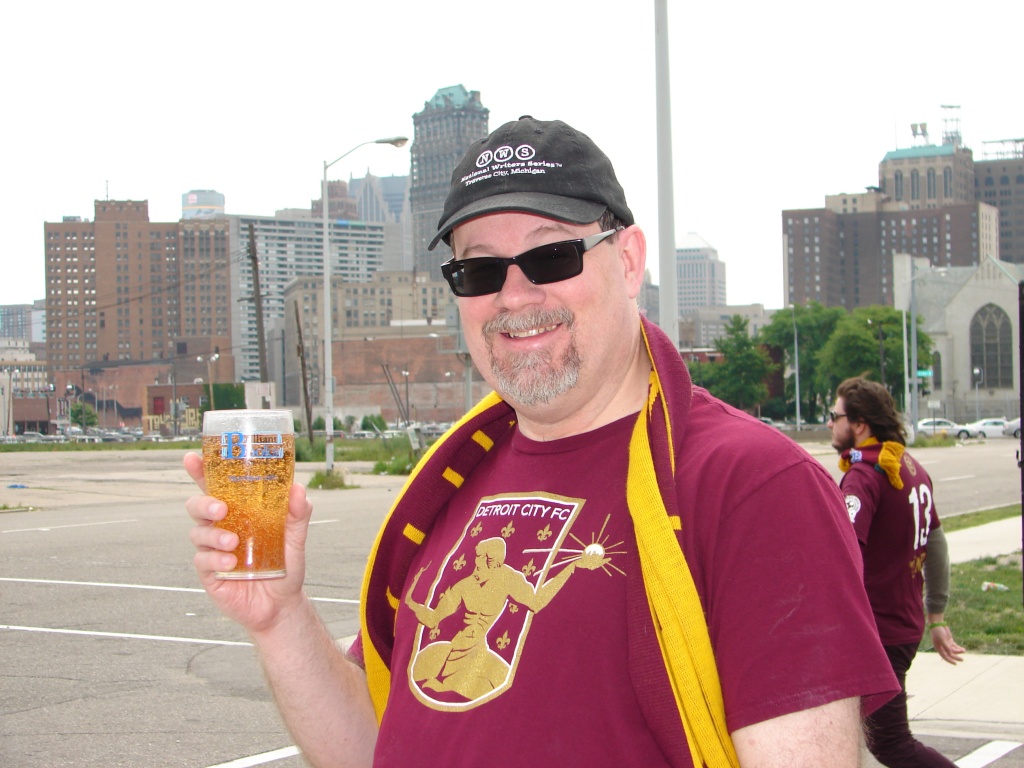