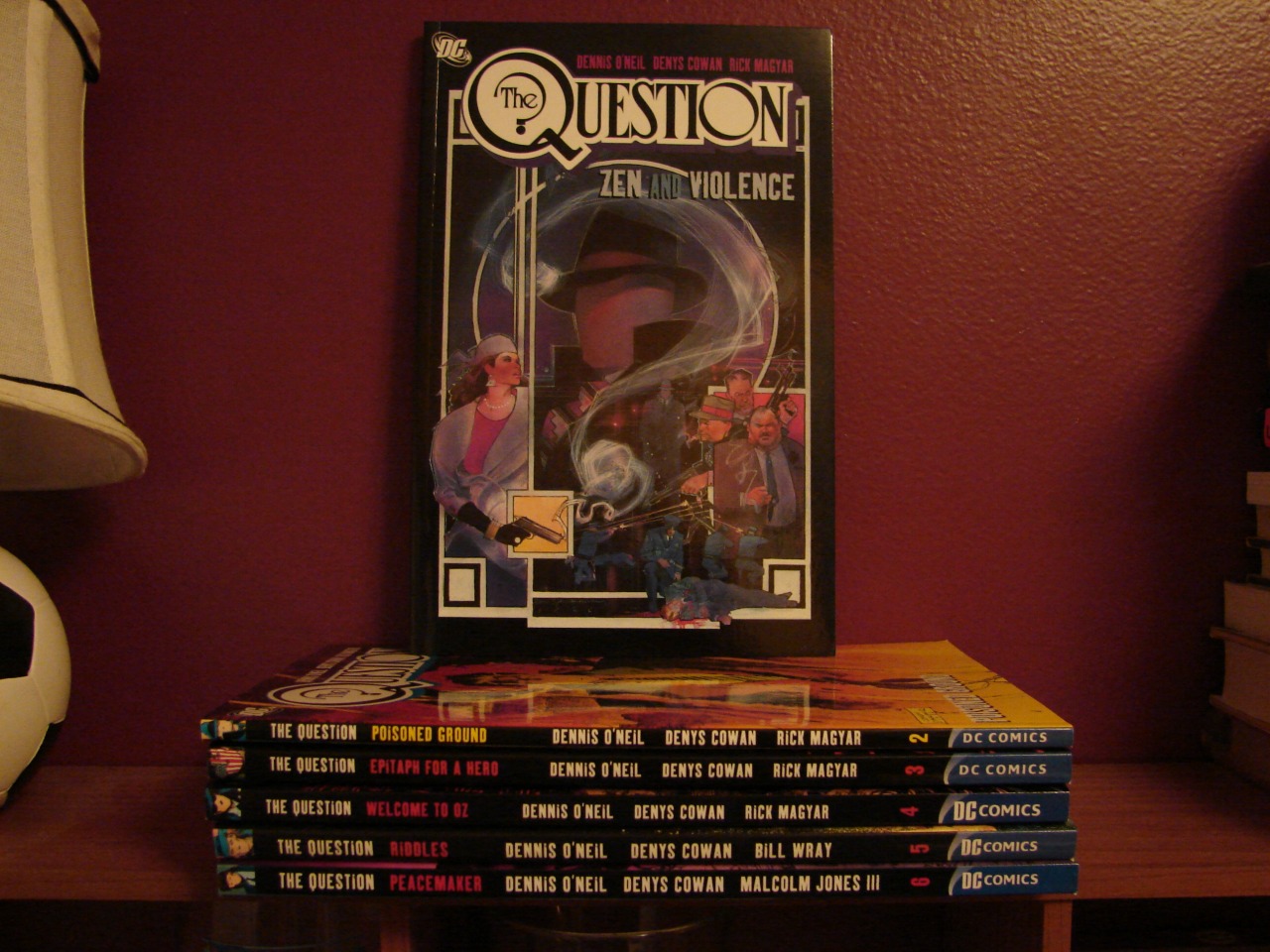 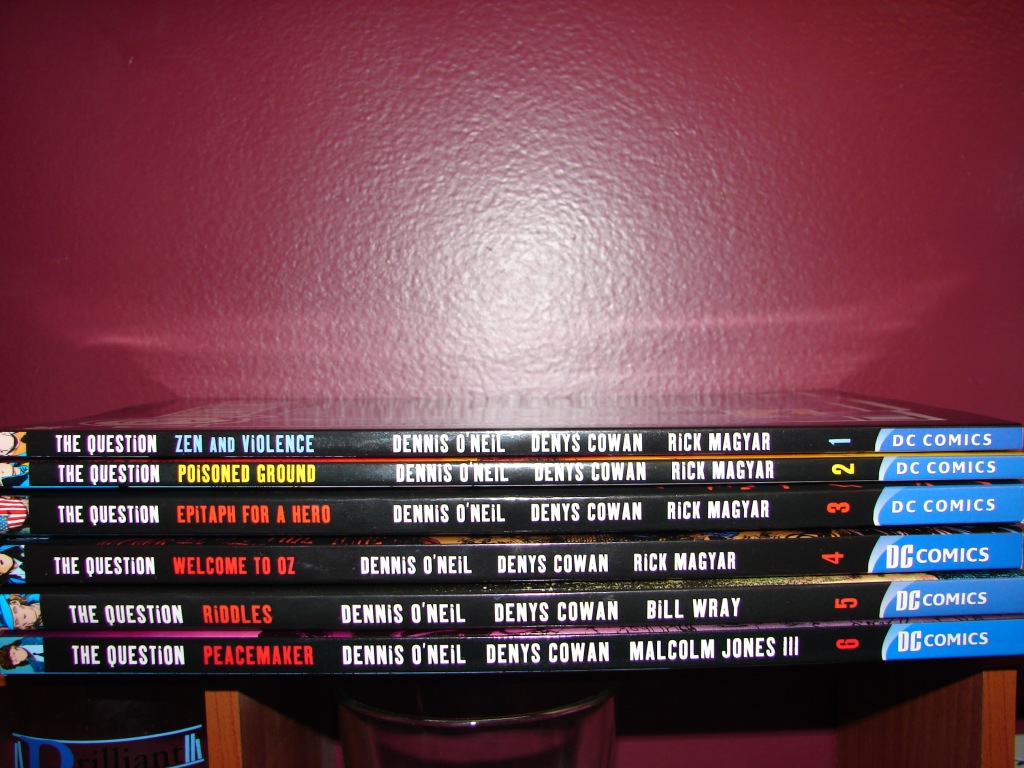 In 1987, DC Comics revamped the old Charlton Comics character, The Question.  Veteran writer Dennis O’Neil undertook the project and created one of the most interesting comic book characters I ever read.

The Question was not bestowed with super powers.  He was Victor Sage – news anchor and journalist on Hub City’s KBEL Television station who pulled no punches.  Hub City was a cesspool of crime and vice, on the streets and in the professions that are supposed to be upstanding.  In order to get the lead on stories and contribute to rounding up Hub City’s vermin, Sage donned a flesh-toned plastic mask that affixed to his face by way of a gas concocted by his friend and philosophical sparring friend, Aristotle Rodor, Ph.D., or “Tot” for short.  The mask created the image of a faceless man. 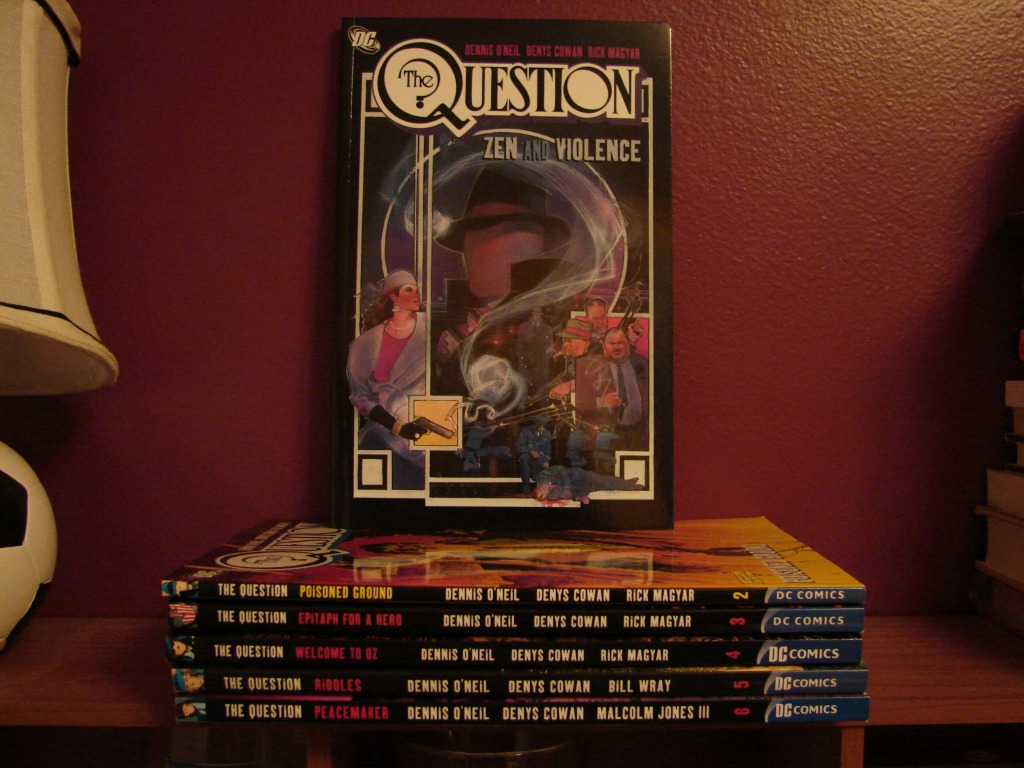 The Question was not driven by revenge, like Batman, or by some accidental or in-born ability motivating him out of a sense of responsibility to use his power for the benefit of mankind.  The Question was driven by his desire to discover and learn about life.

At the conclusion of the first issue, The Question was severely beaten by Lady Shiva, a martial artist beyond compare, along with some of the Mayor’s thugs.  Sage’s body was dumped in the river, the group assuming his demise.  Lady Shiva, however, retrieved him from the river and returned him to Tot’s home.  Sage’s body broken, she left behind a series of maps, which led Sage to Lady Shiva’s teacher, Richard Dragon.  The paraplegic Dragon trained Sage in the way of the warrior.  Upon the completion of his training, Sage is sent home with Dragon’s final observation.

“I think Shiva is wrong.  She says you have a passion for combat…that’s why she asked me to help you.  I disagree.  I think your passion is curiosity.” 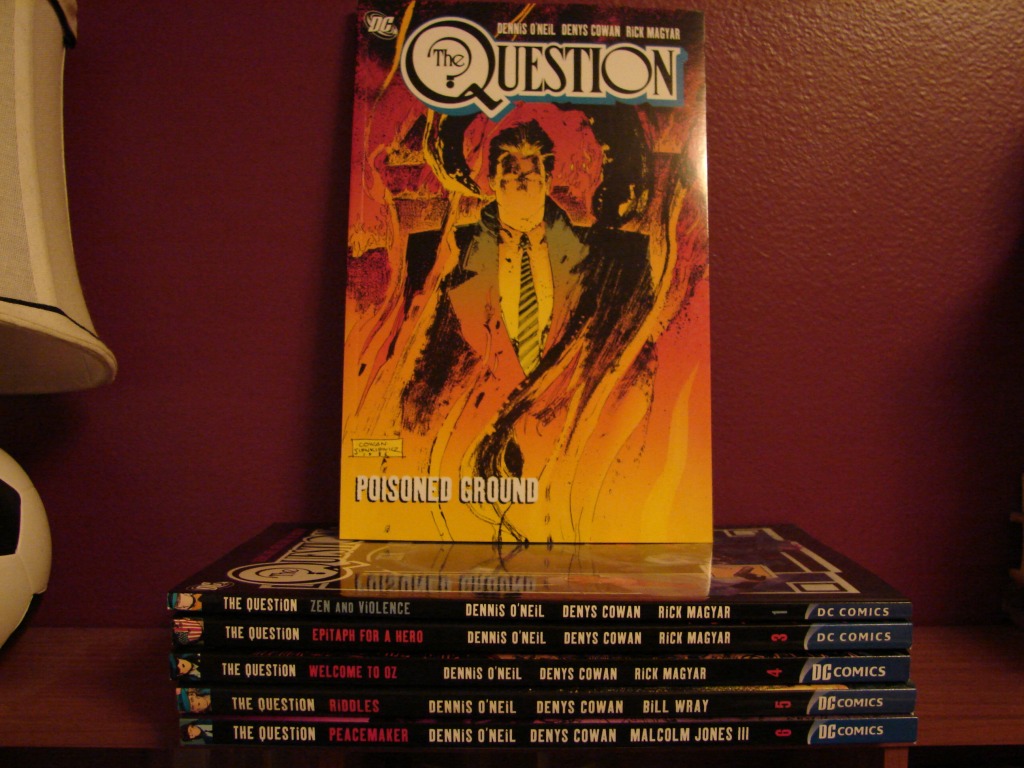 Sage continued on in Hub City, questioning and combating crime.  Often he would “go within” in meditation to calm or center himself on what he was about to embark on. 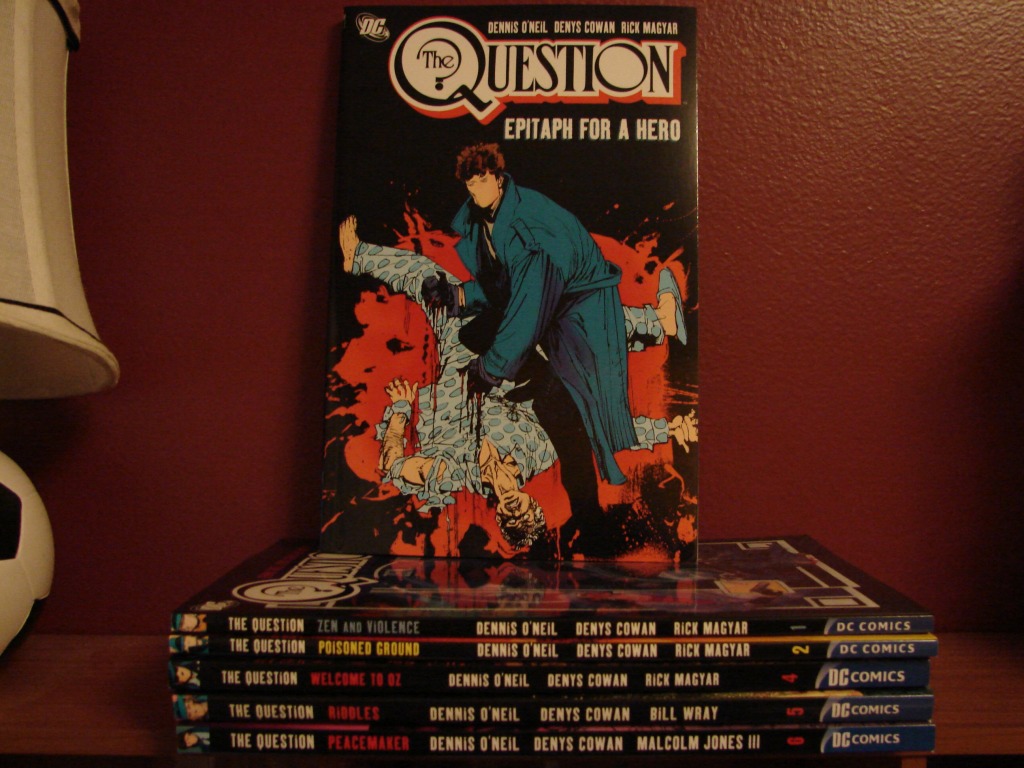 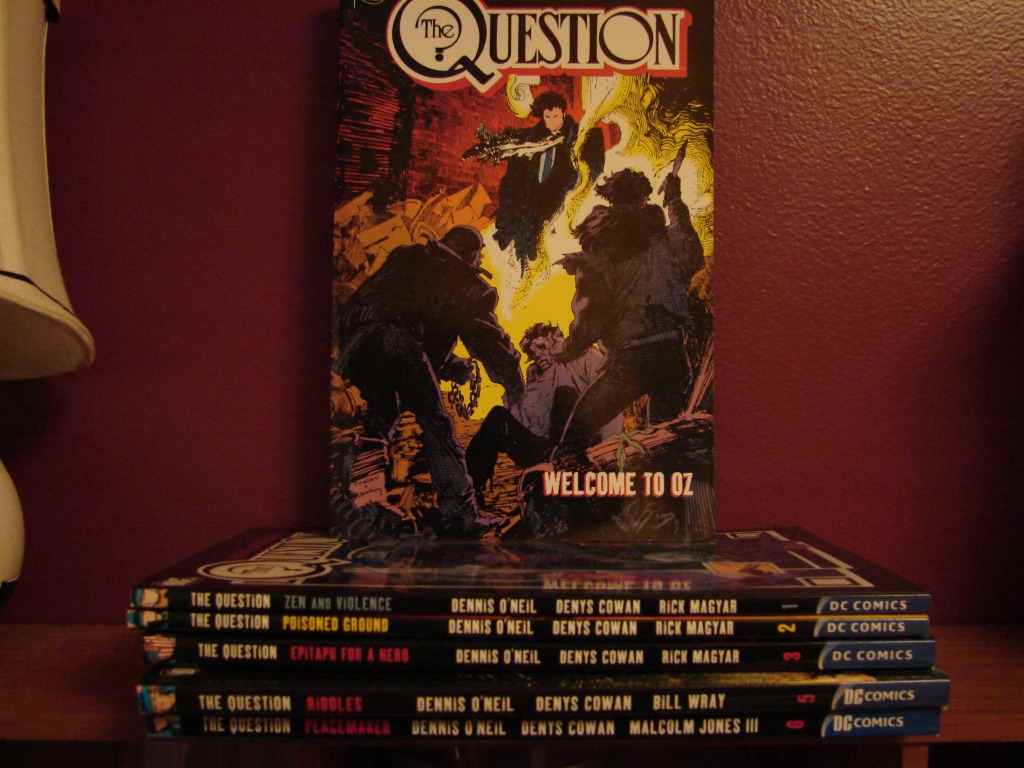 Zen and the Art of Motorcycle Maintenance by Robert Pirsig.
Movements of Magic: The Spirit of Tai Chi Chuan by Bob Klein
Golf in the Kingdom by Michael Murphy
Way of the Peaceful Warrior by Dan Millman
Any of the Eighty-Seventh Precinct novels by Ed McBain
The Uses of Enchantment by Bruno Bettelheim
Steppenwolf by Herman Hesse
Crime and Punishment by Dostoevsky
The Wandering Taoist and Seven Bamboo Tablets of the Cloudy Satchel by Den Ming Dao
Tai Chi: The Supreme Ultimate by Lawrence Galante
The Tao of Physics by Fritjof Capra
Zen and the Art of Martial Arts by Joe Hyams
Through a Scanner Darkly by Philip K. Dick
Chop Wood, Carry Water: A Guide to Finding Spiritual Fulfillment in Everyday Life by Rick Fields
The Invisible Man by Ralph Ellison
Zen Without Zen Masters by Camden Barnes
The Art of War by Sun Tzu 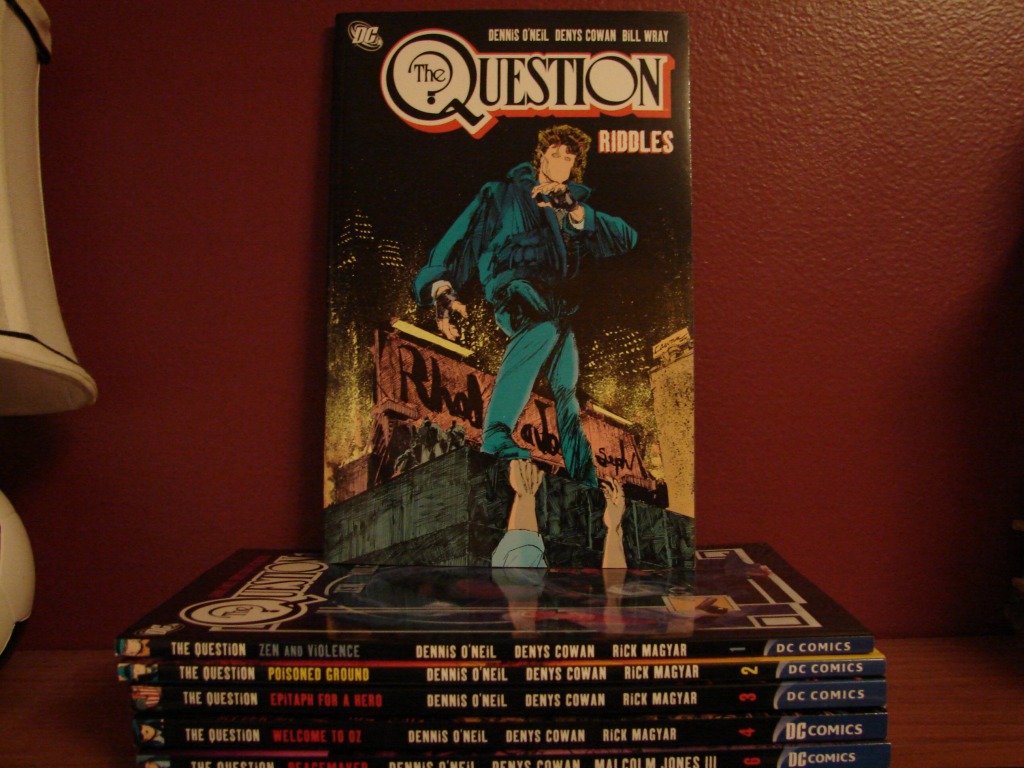 One of my favorite stories was a three-part tale titled Fables.  The story began in Detective Comics Annual #1, continued in Green Arrow Annual #1, and concluded in The Question Annual #1.  It involved a sensei who was over 150 years old and ready to move onto the next world, but sought the aid of Batman, Green Arrow, and The Question (along with Lady Shiva) to take him to his resting place.  He uses fables to win the assistance of Batman and Green Arrow, but had no fable for The Question.  Sage had to learn his in the end. 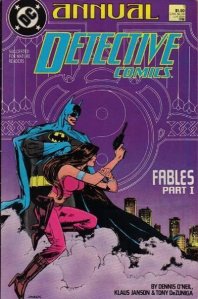 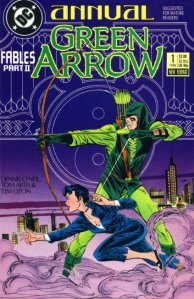 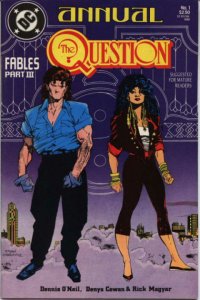 The series was cancelled after thirty-six issues.  The Question made a few cameo appearances and had  a brief run as a quarterly comic.  I was disappointed to learn that DC killed Victor Sage and replaced him with Renee Montoya of the Gotham City Police Department.  Nothing involving the character since can compare to the brilliant storytelling of Dennis O’Neil and the gritty artwork of Denys Cowan.

The six-volume trade paperback series includes the entire run (minus the Fables story), which I return to often. 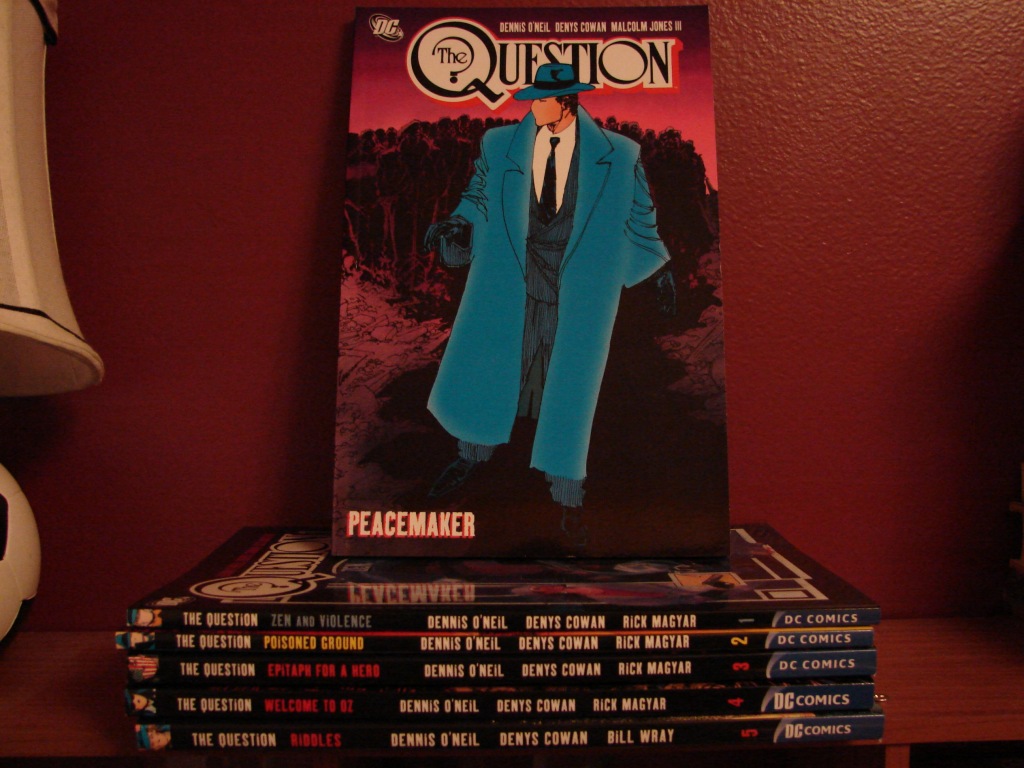 One thought on “(Comic) Book Review: The Question”