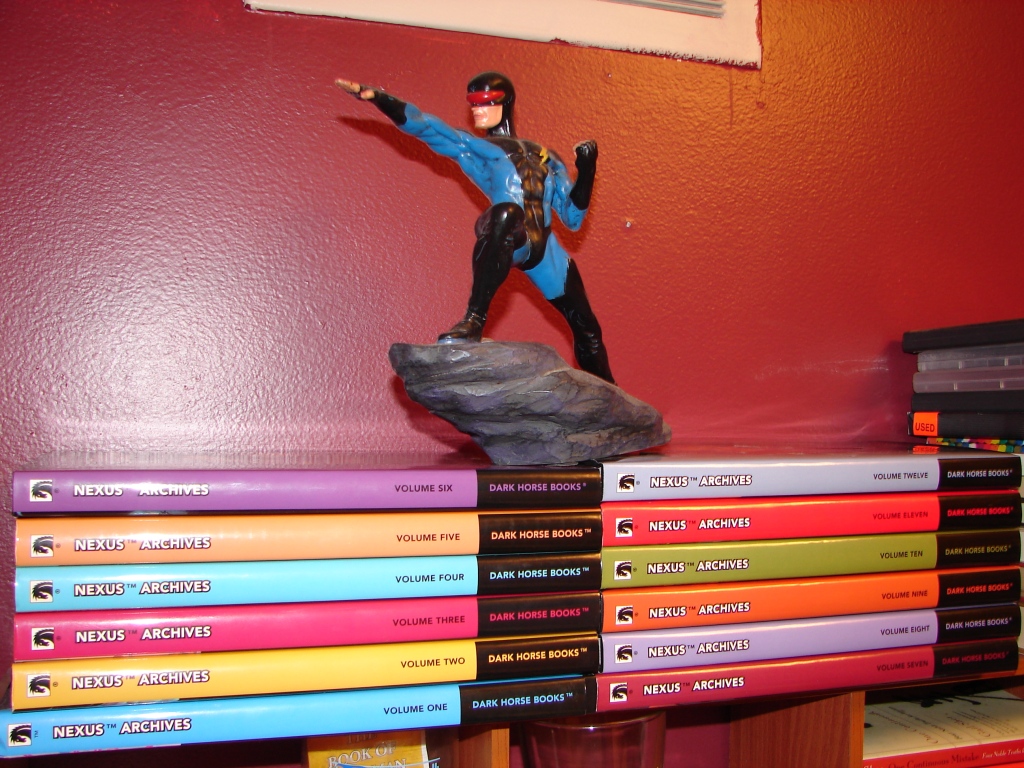 I do not pretend to judge.  My visits have nothing to do with vengeance.  What I do, I do because I must!  I act in self defense. – Nexus

Capital Comics was one of the emerging independent comic book publishers that had started to gain shelf space in the indie comic book stores in the late 1970’s/early 1980’s.  The first title the Madison, Wisconsin publisher released was Nexus in 1981.  It was an odd, magazine-sized mag, 36 pages printed in black & white, by an unknown writer and artist, from an unknown company.  By all standards of the day, it was certain to perish.  However, the intriguing story and the depth of the character, along with the stunning artwork developed a following and the attention of the critics. 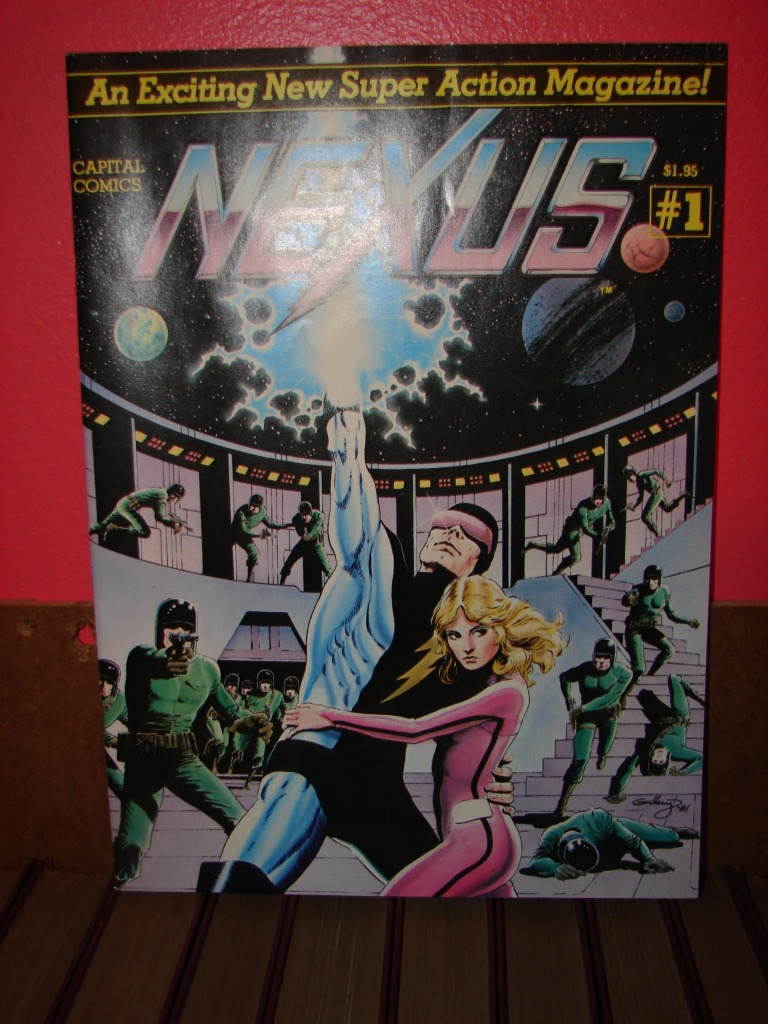 Horatio Hellpop (Nexus) resides on the moon Ylum (pronounce eye-lum), in which he welcomes refugees from around the universe.  To them, he is known as The Liberator, and to others he is deemed an enigma to be feared because he seeks out mass murderers and kills them.

Other people call him a vigilante, and I suppose in the eyes of many of the people observing he could be called a vigilante, but he is really, literally, acting in self-defense…he really doesn’t want to go out and kill these guys.  He has no choice.  If he doesn’t do it, the dreams get worse and worse, they become physical, he starts to get pain from the victims of the murderers he dreams about.  The pain becomes more intense and eventually they’ll kill him. – Mike Baron, (Amazing Heroes #18, December, 1982).

Nexus’ origin begins in the second issue.  Horatio’s father, General Theodore Hellpop, was the hero of the liberation of the planet Vradic.  The Supreme Soviet promoted him the position of the planet’s Viceroy.  He meets and marries Marlis, who then becomes pregnant.  The Hellpops approach Brother Lathe, an Elvonic priest and Marlis’ brother, to bless the child before he is born.  Lathe, not a fan of his brother-in-law, proclaims that the child is cursed and his life will be a nightmare.  This led Hellpop to issue a warrant for Brother Lathe’s arrest.  Lathe goes underground, generates a rebellion against the Sov Viceroy, which overpowers the Vradic People’s Militia.  The Hellpops are forced to evacuate.  Hellpop’s orders were to defeat the rebels at all costs, which he does by destroying the planet.  “In order to save Vradic, I had to destroy it.”  They flee the galaxy, heading out as far away as possible, landing on the moon of Ylum. 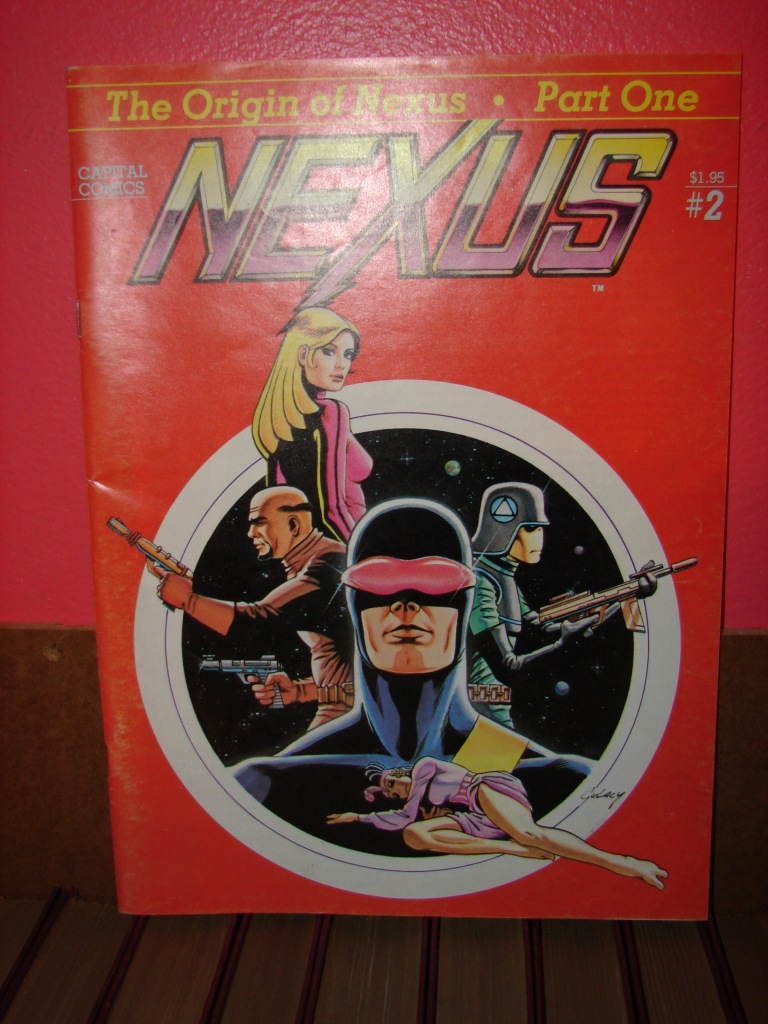 The third and final issue of the magazine format concludes the origin story.  The Hellpops give birth to Horatio.  The family  lives on Ylum alone, and the young Horatio discovers his playmates, Alph and Beta, two Ylumites who suggest to Horatio that he never mention them to his parents.  His parents didn’t believe him anyway, writing them off as imaginary friends of the child.  When Horatio was five, Marlis wandered into one of the corridors.  Alph and Beta disappeared, too.  Horatio and his father searched for weeks but could not find her.  Months later, her body was found, having starved to death.

Alph and Beta re-appeared and engaged with him as he grew up.  He then experienced the beginning of his curse.  One night, he had a dream about Vradic and suffered physically from it.  He crawled out of bed and found his way into “the tank” – an hourglass-shaped tank that kept him healthy when he was born prematurely – where he recovered.  Alph and Beta get under his skin, and, out of anger, he discovers his fusion-casting power, blasting Alph and Beta.  The dreams of Vradic continued, intensifying Horatio’s pain and agony.  Alph and Beta appear, giving him the answer of how to make the dreams stop:  “You must eliminate the cause.”  And Horatio does so.

The third issue also included a flexi-disc that you could play on your stereo and have the book read to you.  Here’s the opening…

Nexus’ supporting cast are equally complex and diverse.  Sundra, his love interest, was an agent for the Web, sent to Ylum to report back to the agency.  His vigilante/counterpart Juddah Maccabee – The Hammer – is a more robust, active warrior from Thune.  Dave, Nexus’ closest friend, is an intelligent Thune, the father of Juddah, and a person he can bounce philosophical thoughts off.  The futuristic setting is also ripe with the political struggles of a planet (or moon) inundated with refugees seeking to establish a functioning government; energy politics of the more powerful planets, and genocide throughout the galaxy.  Even the fusion-casting hero’s effect on black holes becomes an issue.

The third issue was the final issue as a magazine.  Capital shifted the format into a regular, 32-page, color comic book.  They published six issues before going under, but First Comics picked up the title, and continued for a total of 80 issues.  Dark Horse Comics published a number of mini-series, adding 22 more issues to the Nexus legend.

The twelve volumes of Nexus Archives by Dark Horse Comics collects the three black and white issues, the eighty Capital/First Comics issues, and the four issue mini-series, Next Nexus.

Mike Baron was one of my favorite comic book writers as a result of Nexus.  Capital Comics published his second title, The Badger, a martial artist with multiple-personality disorder.

Steve Rude’s art is just beautiful.  The first piece of original art I ever owned was a Steve Rude pencil sketch of Nexus, which he did for me at the 1985 Chicago Comicon, still framed and hanging in my office.  When I considered a cover for my novel I strongly considered Mr. Rude and sent him an email to inquire about the possibility.  Unfortunately his schedule was booked.

Thirty-five years after the appearance of Nexus, Baron and Rude are reuniting and bringing out a Nexus comic strip.  Definitely something for the Nexus fan to return to, and for new fans to come on board.