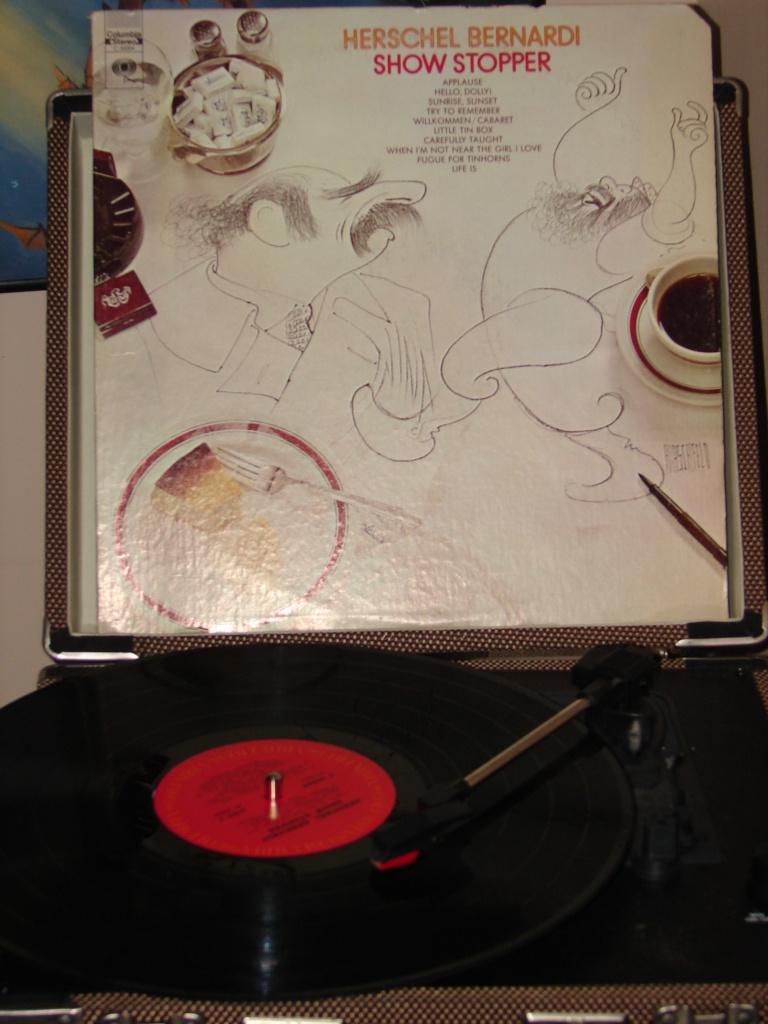 This Vinyl Memory is not about a record from my past.  My distant past, anyway.  The first time I listened to it was less than a week ago.

I was in my basement, where the turntable sits and spins when I am either free-writing by hand or doing some other arranging, organizing, or sorting through the collection of memories beneath the ground level of both home and mind.  This evening, it was putting a few items out on the Internet’s largest garage sale.  As I worked, a couple of Monkees albums played, followed by a Frank Sinatra LP.  With a few items left to list, I decided to sample a freebie.

The record store I frequent – Weirdsville Records in Mount Clemens – will package records by the dozen that they just can’t sell, and give them away for free in the form of a “mystery box.”  The caveat being you can’t bring them back.  Herschel Bernardi’s Show Stopper was one such album I discovered in a mystery box I took home one day from the store.  Tonight, I thought I’d give it a spin.

I’ve never been one for musicals, though that is changing.  Since our first trip to New York City and seeing Rock of Ages on Broadway, my hopes for the next trip there are 1) staying in one of the boroughs so not to spend so much time on the train in and out of the city, and 2) to take in a Broadway show at least every other night during the vacation.

I put Bernardi’s record on.  It’s a live performance of him singing a variety of songs from musicals, explaining that he was raised in the theaters of New York and was different from the other kids he grew up with.  He sang, and I listed items on the website.  Side One concluded, it wasn’t terrible, so I got up and flipped it over to Side Two.  While working, a song played which made me stop.  The lyrics struck me.  I rose, walked over to the record player, lifted the needle and gently lowered it back to the beginning of the track.

South Pacific is a Broadway musical which premiered in 1949 by Rodgers and Hammerstein.  Based on James A. Michener’s book, Tales from the South Pacific (1947), the story’s theme is racism as two characters become involved in romances that cross racial boundaries, and the decisions based upon their conflicts.  I have never seen this musical, but I’ll be on the look out for it.

The song struck me, at first, because of the lines:

Yeah.  At first I thought that I did a good job of ignoring what I had been taught.  And though I was able to disregard the specifics, I was still taught how to hate.  The words of this song had come to me less then a week after MLS Cup 2015.

On December 6, 2015, the Columbus Crew SC hosted the Portland Timbers FC in the MLS Cup in Major League Soccer’s 2oth season.  Since 2002, I’ve traveled down to Columbus to catch the occasional match – the Crew being the closest MLS team geographically to Detroit.  I’ve grown to become a fan of the Crew. 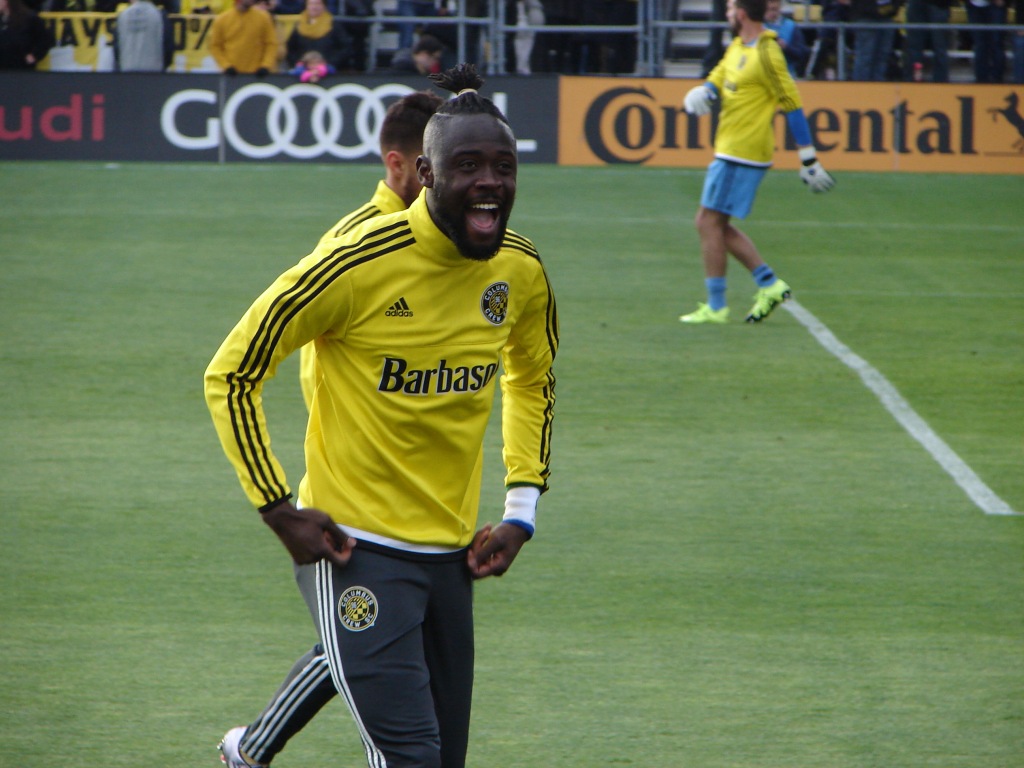 When Portland entered the league in 2011, I enjoyed watching their home matches on television, as their supporter group – The Timbers Army – was a powerful force of fan enthusiasm.  The team dates back to 1975 in the old North American Soccer League and three years later, I was introduced to professional soccer through the Detroit Express.   Then, in 2012,  Detroit City FC was born, from which emerged the Northern Guard Supporters.  It is my understanding that the NGS had roots to and were inspired by the Timbers Army.

That said, the prospect of a Portland Timbers at Columbus Crew MLS Cup was a no-lose proposition for me.  The Crew are my favorite MLS club, and the Timbers my third (NY Red Bulls became #2 when Thierry Henry joined them in 2010).

The thing about Supporters Groups is that the focus is all about supporting the team, and contempt for every opponent.  Sunday reminded me of this.  In a place where I would be happy with either team winning, there were a few NGS folks at the game rooting for the Timbers and hating on Columbus and Ohio, not just the team, but the whole state.  You see, some Michiganders are taught to hate Ohio (and I’m sure vice versa), most likely through the sports rivalry between the University of Michigan and Ohio State University. (Another view is that Ohio is the state Michiganders are forced to drive through in order to get to where they really want to go).

I’m not exempt from such sports-driven hatred.  I could have chosen the Chicago Fire to follow, however my hatred of that city and all of its sports teams guided me to Columbus.  There are three hockey teams I root for – the Avalanche, the Devils, and whoever is playing the Red Wings.  Even distance doesn’t prevent the growth of hate, for as an Arsenal fan of the Premiere League, I’ve come to hate the Manchester teams – both United and City.  The hate for these teams and locations did not emerge from me at birth, but emerged from experiences with their fans and organizations.

With all that is going on in our country right now, where we have one 2016 Presidential candidate whose campaign foments with fear and prejudice, first against Mexicans, most recently stating he would ban Muslims from entering the United States; where a county clerk in Kentucky refused to carry out her duty to give marriage licenses to same-sex couples; and with the unending institutionalized racism against African Americans, You’ve Got To Be Carefully Taught strikes a chord which still rings true today.  And though the message of the song speaks to racial prejudice, we learn to divide ourselves and cultivate hatred on many levels, which include sports rivalries.

Hatred is one of the three poisons the Buddha warned us about.  Because we want our life to be pleasant, comfortable, and satisfying all the time, we create conflict with those who would disrupt that.  Obviously, if we have a strong bond or connect our identity to our sports team, and another team defeats ours, we’re drawn to disliking them, perhaps even elevating our feelings to hatred depending on the stakes of the game.  It’s as if it is a personal blow against us.  The Buddha identified the poison, and provided the antidote: loving-kindness, compassion, patience, and forgiveness.  If we’re open to the complete experience of life, there will come times of defeat and loss.  Yes, it is the other team that delivered that blow to our team, however hating them is not going to eliminate the pain we feel from it.  It may, instead, amplify it.  Being patient and forgiving the errors that were made which resulted in the loss is more effective.

I still have work to do on this when it comes to the teams I hate.  But I’ve come a long way by letting go of the hopes of winless seasons for Chicago teams, the Manchesters of the Premiere League, and the Red Wings.  My energy is better served rooting for and supporting the teams I love.