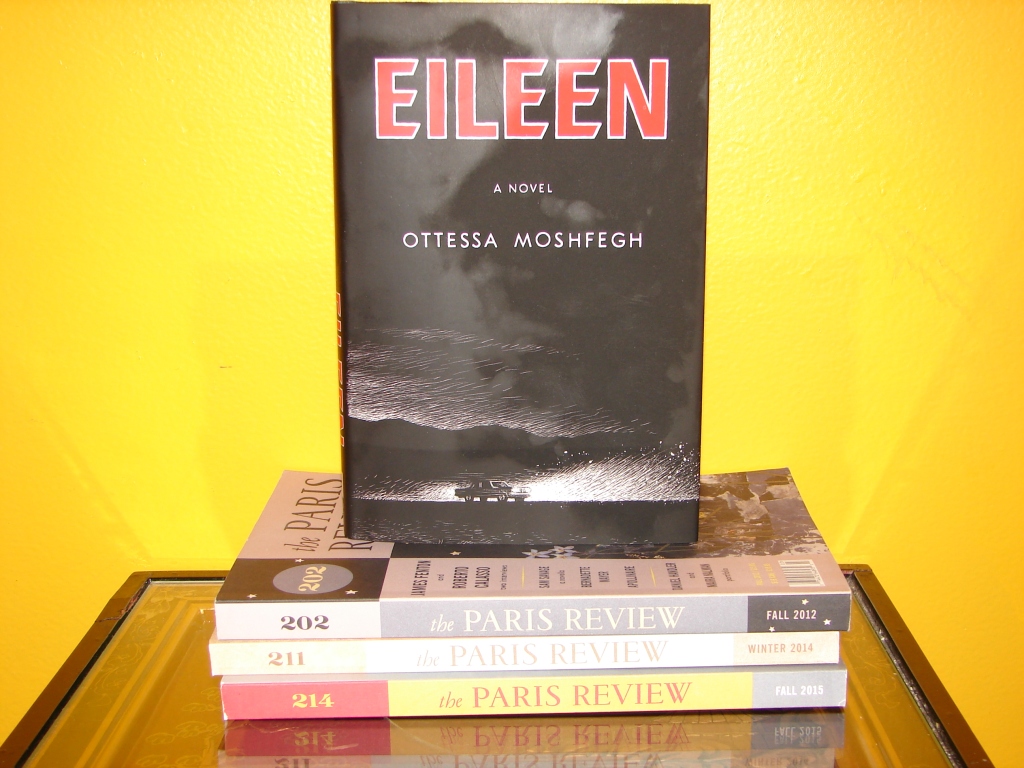 In July, 2014, I visited New York City for the first time.  One day we spent book store shopping, during which we discovered Three Lives and Company in Greenwich Village.  The small, well-stocked book store had a table upon which back issues of literary magazines were for sale for a couple bucks a piece.  I picked up a copy of the Fall, 2012 edition of The Paris Review.  This was my first exposure to the legendary literary journal founded in 1953 by a group of American writers including George Plimpton, Peter Matthiessen, Harold L. Humes, Thomas Guinzburg, and Donald Hall.

One of the stories within the 202’nd edition was Disgust by Ottessa Moshfegh.  It opened with a 134-word paragraph which was a single sentence.  I thought that was rather unconventional.  No speakers or instructors at the writers conferences and workshops I’ve attended ever suggested that starting a short story with a 134-word sentence was a sure-fire way to get published.  I suppose you can get away with being unconventional if your writing is strong, which Ms. Moshfegh’s certainly is.  The protagonist in Disgust is the quirky, socially awkward Mr. Wu who has a crush on the woman who worked at the video game arcade, and his introverted schemes to make contact with her.

Upon returning home, I picked up the newest issue of The Paris Review, which was the 210’th edition – Fall, 2014.  I’ve been hooked ever since.

The Winter, 2014, 211’th edition included another story by Ottessa Moshfegh.  Slumming featured another quirky character, a high school English teacher who owned a summer home in Alna, a small town away from the city.  She tells of her interaction with the residents, like Clark who she paid to maintain and watch the house during the school year, the zombies (vagrant townsfolk) who sold meth and heroin at the bus station, and the very pregnant girl who Clark paid to clean the narrator’s house.  Again, the unusual characters drew me into the story.

In the September, 2015 Indie Next List flyer, Moshfegh’s debut novel, Eileen was promoted.  I purchased it at Literati Bookstore in Ann Arbor, but I didn’t get a chance to read it until recently.  In the interim, The Paris Review‘s 214’th, Fall, 2015 edition contained Moshfegh’s short story, Dancing in the Moonlight.  The narrator, Nick, a Yale grad, falls for a woman selling her refurbished furniture in a pop-up market on the Lower East Side of New York, named Britt Wendt.  “That’s not a name, that’s the beginning of a sentence,” his oldest friend, Mark Lasky said when he told him.  Again, it was a well-crafted story involving unusual and engaging characters.

So here we are.  My name was Eileen Dunlop.  Now you know me.  I was twenty-four years old and had a job that paid fifty-seven dollars a week as a kind of secretary at a private juvenile correctional facility for teenage boys.  I think of it now as what it really was for all intents and purposes – a prison for children.  I will call it Moorehead.  Delvin Moorehead was a terrible landlord I had years later, and so to use his name for such a place feels appropriate.

In a week, I would run away from home and never go back.  This is the story of how I disappeared.

Eileen is a novel-length exploration inside the head of yet another unusual character, in a reflection of the event fifty years prior, in 1964, that caused her to run away from home.  As a result of her disappearance, Moshfegh’s narrator changed her identity , and masks the details of the New England town in which she was born, raised, and fled from.

Darkly funny and sad, Eileen lives with her father – a retired police officer – whose reputation keeps him from finding himself in jail from his drunken antics when he wanders from home.  Her mother had recently died, and her older sister, Joanie, lived with another man a few towns over, leaving Eileen to care for her unappreciative, intoxicated father.

Eileen was a social outcast, and the inner workings of her mind are creepily realistic.  The reader is placed in a position of feeling both uncomfortable and pity for the girl.  She thinks about leaving, about how her father, her sister, her co-workers, might feel if she were suddenly gone, but nothing moves her.  Until the correctional facility hired a new counselor – Rebecca St. John.

Rebecca is an educated, classier woman who is new to town and becomes friendly with Eileen.  This sparks a glimmer of hope for the narrator, a companion and friend.  Rebecca becomes the catalyst for Eileen’s disappearance.

Throughout the novel, the reader knows that something is going to happen to cause Eileen to leave town.  The ‘why’ she leaves, well, I did not see coming.

Like her three previously published short stories, Ottessa Moshfegh pulled me into the company of an unusual character, the kind of character I prefer to read about, and weaved a satisfying story within a gloomy environment in Eileen.