If you are from Michigan, and have been involved in hockey in any way, chances are you have a Gordie Howe story.  Learning of his passing from a friend who I was having lunch with at Schuler Books & Music in Grand Rapids, MI, rekindled memories of my brief moments with this legendary man.

The oldest memory has been with me for decades.  It hung in my parents’ basement until recently when it found a place in mine.

My aunt worked for the Ford Motor Car Company.  In June, 1972, after Gordie retired from 25 seasons with the Detroit Red Wings and before he signed with the Houston Aeros of the WHA, Ford hosted an event where they brought Gordie in to sign autographs.  I was nine-years-old and had recently found hockey to be my favorite spectator sport.  I attended my first hockey game on January 9, 1971 – a 3-2 Detroit victory over the Buffalo Sabres at the Olympia.  My parents talked up Gordie, while I, being a youngster in the 70’s, was drawn to Gary Unger, and his flowing long hair (The Wings’ traded Unger less than a month after my first hockey game).

At the Ford event, Gordie was situated at a table.  My mom took some photos of me standing near him or with me in the background. 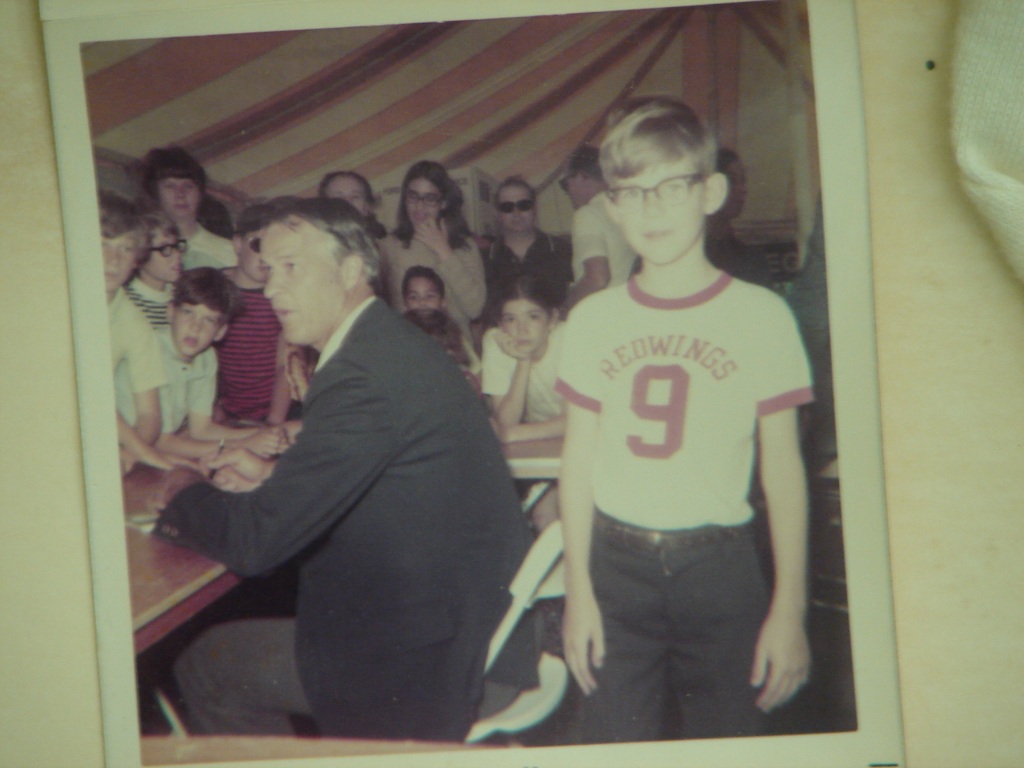 Can you imagine a kid being allowed to get this close to a sports superstar today?

We then stood in line and waited to have him sign my autograph book.  When my turn came, I nervously and silently placed my autograph book before him.  He didn’t open it.  Instead, he noticed the shirt I was wearing.  He took the shirt at my waist and pulled it toward him.  Then he pressed the ballpoint pen against the material, signing his name.  I was stunned.  A few days later, a Ford photographer at the event talked to my aunt at her office, saying he had photos of Gordie autographing my shirt.  He gave them to her, and my parents framed the shirt and photos.  Touched by greatness, I was inspired.  That fall, I signed up for the only season of sports I ever played – a house-hockey league at the Plymouth Cultural Center. 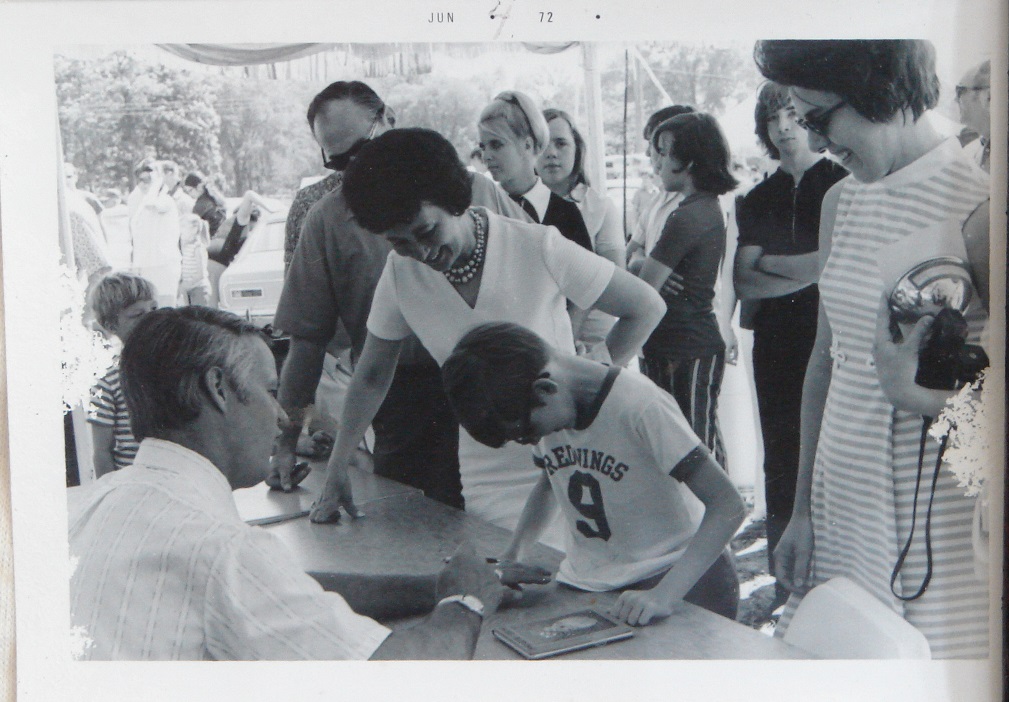 Hanging on the wall in my parents’ house, it always reminded me about how attentive and kind this man was.  As the years went by, and I became more involved as a fan, spectator, booster club president, photographer, and columnist in the sport, it was also a reminder of the contrast between him and the next generation of superstars.  He did not think his superstar status made him superior to us.  He was one of us, appreciative of our adoration.

I remember watching the 1979-80 NHL All Star game.  No.  Scratch that.  I remember nothing about the game.  It was played at the brand new Joe Louis Arena in Detroit, and the only thing that mattered was the pre-game player introductions, saving the Hartford Whalers’ right winger for last.

Though the 1979-80 season was his final year of hockey, he was not done.  There was one record yet to break.

I started photographing and writing for Great Lakes Hockey Alliance – a free monthly newsprint hockey publication covering all the Michigan hockey teams in the NHL, IHL, UHL, OHL, & CCHA – in 1997.  I photographed Detroit Vipers’ games at The Palace of Auburn Hills.  It was magical timing.  After so many photos from the stands, having a press pass and seeing my photos published was thrilling.  To cap it off, the Detroit Vipers won the 1997 Turner Cup, allowing me to go on the ice, capture team and player shots with the Cup, and the celebration in the locker room afterward with players’ friends and family.  Life was good.  Then, it got better.

For the home opener of the 1997-98 season, not only would the Vipers raise the Turner Cup Champion banner, they would start the season with #9, Mister Hockey, in the line-up.  It was an opportunity for Gordie Howe to be the only athlete to play a professional sport in six decades, breaking Minnie Minoso’s record of playing in Major League Baseball in five decades.   Minoso was present at the event.

Things were definitely different that evening.  The press box was overflowing with reporters from across the globe, as I went to pick up my media notes.

When I descended from the heights of the stadium to my usual spot at ice level – the box between the players’ benches – three photographers had climbed in to get photos.  They did not like shooting through the glass, so one-by-one they climbed out.  I reclaimed my place.

The Palace, packed with 20,182 fans, provided another standing ovation for #9. 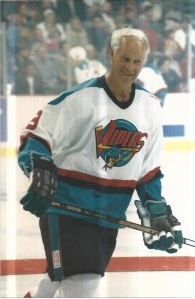 He skated the first shift; forty-seven seconds of historic ice time.  Vipers defenseman, Bobby Jay, moved the puck into the Kansas City Blades’ zone, then passed it to Howe, who redirected the puck on net.  Another shot on goal to his professional career statistics.

Gordie coming back to the bench after his shift.

He stayed on the bench during the first and second period, not returning for the third.  Which was too bad.  At the end of the third period, the score was tied 4-4.  The IHL had the shootout as a way of breaking ties (the NHL did not implement the shootout until 2005, nineteen years after the IHL adopted it in 1986).  Imagine if Gordie had been on the bench for the shootout, skated onto the ice, went one-on-one with the goalie, and scored.  Would The Palace have had to rebuild its roof?

The power of Gordie Howe transcended generations.  The following season, the Vipers celebrated his 70th birthday as a promotion night.  I arrived early at the game, and was walking through the corridor by the locker rooms.  Most Vipers games started at 7:30, with the doors opening to the public at 6PM.  Before the doors opened to the public, little league hockey teams would play on the ice.  I stood in the hallway as the kids – probably the same age I was when Gordie signed my shirt – waddled by on the blades of their skates, weighed down by their equipment, on their way to the locker room.  Gordie, randomly patted one of the kids on his helmet as he walked by and said, “You played good.”  The kid looked up, then stopped.  Awestruck.  The look on his face was one of a kid empowered. Gordie Howe said I played good.

Those are my fond memories of Gordie Howe.