Homelessness is a massive issue in America.  The National Alliance to End Homelessness provides the following snapshot:

There is no single silver bullet to put an end to this problem. But twelve years ago I discovered a resource, for people who enjoy reading, that assists people living without homes.

In 2004, while in the nation’s capital, one of the many homeless people I saw sold me a newspaper.  It was called Street Sense, a street newspaper that brings awareness to the community about poverty and homelessness.  Seventy-cents of the dollar I paid the vendor went to him.  It is one of 112 street newspapers in 35 countries.

Here in Michigan, there are three such street newspapers.

Groundcover: News and Solutions from the Ground Up is Ann Arbor’s voice for low-income and homeless people.  Established in 2010, my introduction to Groundcover came at the 2012 Ann Arbor Art Fair where the organization has a booth in the nonprofits section on Liberty Street.  The twelve-page monthly provides a variety of features including topical articles on poverty and homelessness, informational pieces on agencies, health features, book reviews, vendor interviews, and first-person pieces and poetry written by vendors.  And, as with the typical daily newspapers, there are coupons, recipes, a comic strip, a crossword puzzle and Sudoku. 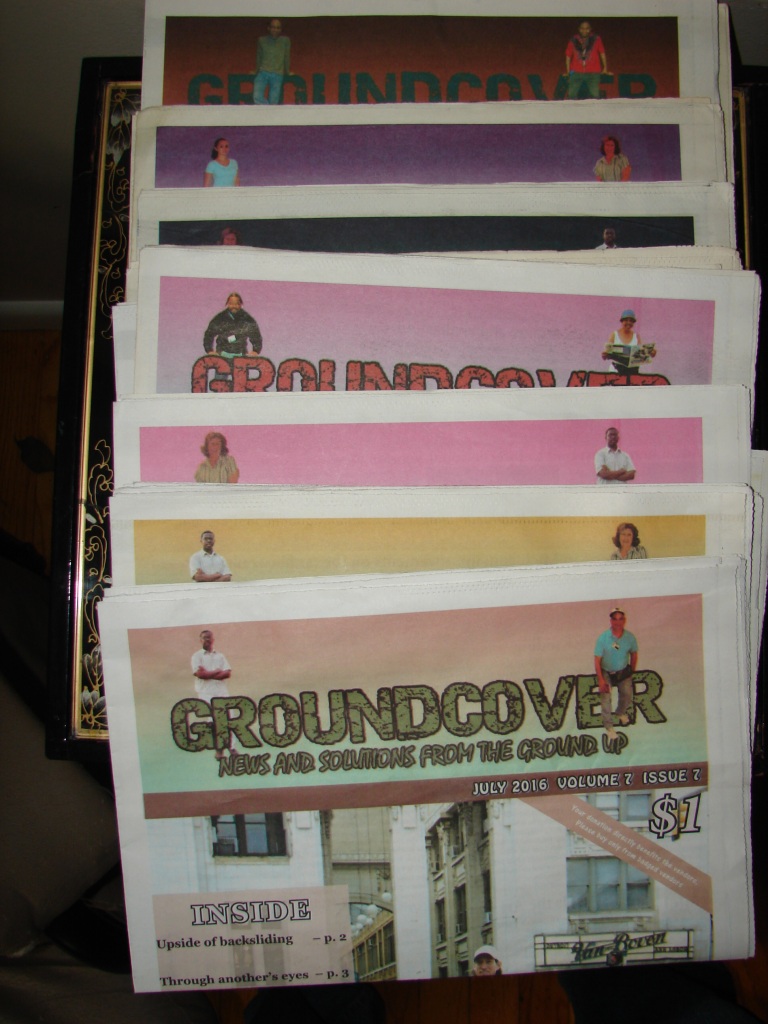 In February, I attended a symposium hosted by the Michigan Journal of Race and Law and the University of Michigan Law School titled Innocent until Proven Poor: Fighting the Criminalization of Poverty.  The two-day symposium included Vanita Gupta*, Principal Deputy Assistant Attorney General and Head of the Justice Department’s Civil Rights Division as keynote speaker, panel discussions, and workshops covering topics such as Ferguson, MO, policing and regulating the poor, jailing the poor, and others.  Susan Beckett, publisher of Groundcover, wrote insightful opinion pieces on the topics of “pay or stay” sentencing (a judge’s order at sentencing for the defendant to pay fines & costs or go to jail), money bail, and indigent defense in the April, May, and June 2016 editions, respectively, based on information presented at the conference.

Usually, you can find vendors selling Groundcover on the streets of downtown Ann Arbor.  Except during the Art Fair.  During that time, the City of Ann Arbor invalidates their solicitor permits, except for at the Groundcover booth.

Groundcover vendor Felicia selling July, 2015 issues, which included an interview of her, at the Groundcover booth at the Ann Arbor Art Fair, 2015.

In Detroit, Thrive Detroit Street Newspaper: Driving Sufficiency Through Micro-Enterprise is the street paper assisting the city’s low-income and homeless.  Founded in 2011, the dollar you pay the vendor puts seventy-five cents into his or her pocket.  I spend time downtown at events and such, but I have not yet been approached by a vendor.  The only copy I have I found was purchased at Source Booksellers on Cass.  But I’ll keep looking for them.

In November, while up in Traverse City for the annual Criminal Defense Attorneys of Michigan conference, I met Steve across the street from one of my favorite hangouts, Horizon Books.  He sold me  Speak Up Zine: Traverse City’s Voice of People in Transition.  Launched in 2014, the 24-page zine is worth the two-dollar donation, with a $1.60 going into Steve’s (or other TC vendors’) pocket.  The format is different, and has a more personal approach to it with vendors contributing a lot of the content.  Steve was quite proud to show that he was front and center on the cover of this issue.

The skeptics will ask, “How do I know the person is selling me an actual street paper and not something phony just to make a buck?”  The street papers enforce a vendor code of conduct which includes such ground rules as not asking for more than the cover price, selling only current issues, and by wearing and displaying a badge while selling the papers.  The badge or some form of outward identification is the key.  Furthermore, the vendors are not to hard-sell the public, and are not to sell additional products or panhandle while selling the paper.

Poverty and homelessness is a huge issue in this country.  The Guilty Until Proven Poor symposium offered a vast amount of information on how our society uses laws and the judicial system to penalize a person for being poor, and a recent panel discussion at Pages Bookshop with contributors to the newly released book, Ending Homelessness: Why We Haven’t, How We Can (Lynne Rienner Publishers, 2016), broadened the discussion.  There is not enough space here to tackle the issue, nor is that the purpose of this article.  It can be overwhelming in considering which actions we, as individuals, can take.  We can volunteer our time and bring community together, like what is done at Cass Park on the 2nd and 4th Sundays of the month.  And we can choose not to turn away from a street paper vendor.  Approach him or her and buy a paper from them.  Not only will you be helping someone, but you’ll also have some thoughtful reading material to enjoy.

*Ms. Gupta’s keynote remarks and other articles based on the symposium can be found in Volume 21, Issue 2, the Spring 2016 issue of Michigan Journal of Race & Law.