This was the continuation of the much-hyped, much-anticipated AFC Ann Arbor match which was rained-out four days ago.  On this Tuesday evening, there was some concern whether this match would go, due to an afternoon downpour which once again flooded Keyworth.  Hours before the match time, the team and supporters helped clear the water from the pitch.

Having secured a playoff spot two days ago and the match rescheduled for this week night, the pre-game enthusiasm seemed dampened.  In addition, Craine’s Detroit Business reported that Palace Sports & Entertainment had sent an application to the Federal government to register a “Detroit City Soccer Club” trademark.  The timing of this announcement was unusual, being one week prior to the surprise international friendly against the Italian team, Venezia FC; a match sponsored by Quicken Loans and the Detroit Pistons (Dan Gilbert and Tom Gores – the parties interested in acquiring a Major League Soccer franchise in Detroit). This distraction fueled more passion against the Gilbert-and-Gores bid, and had supporters debating the attendance of the friendly they sponsored. 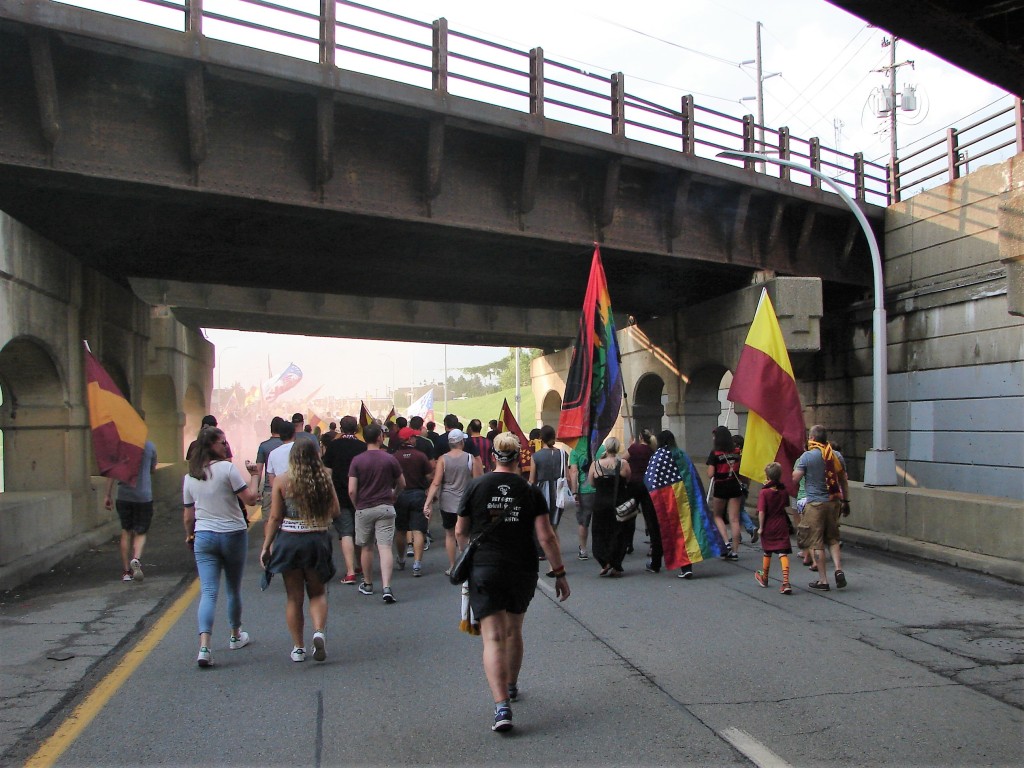 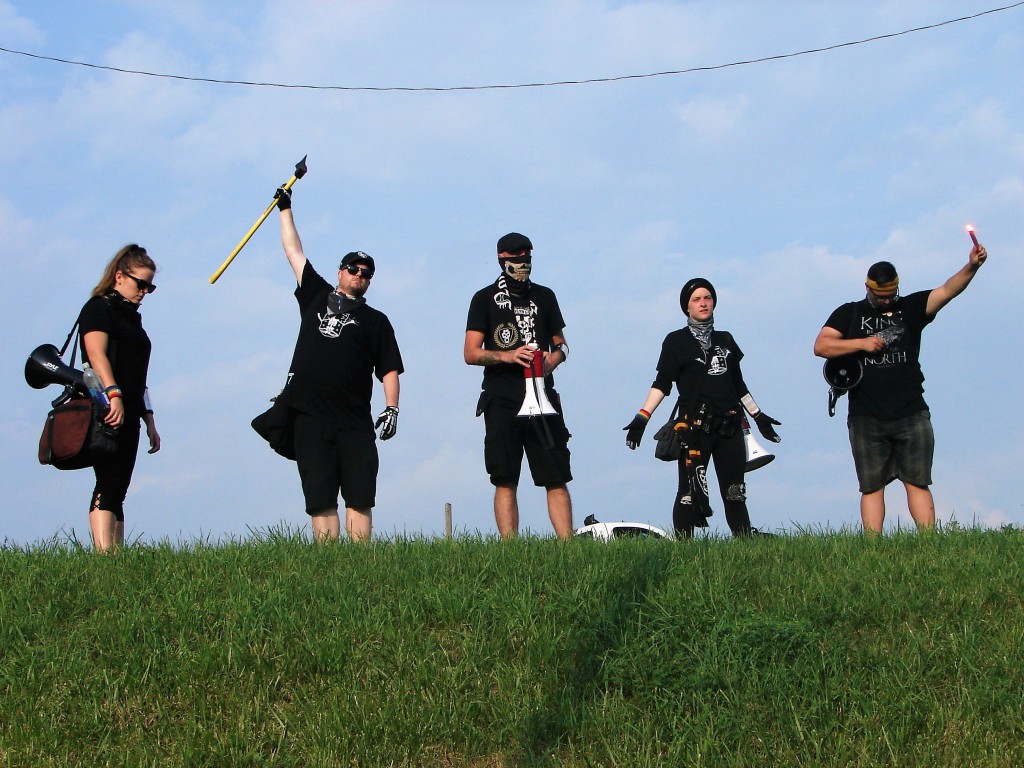 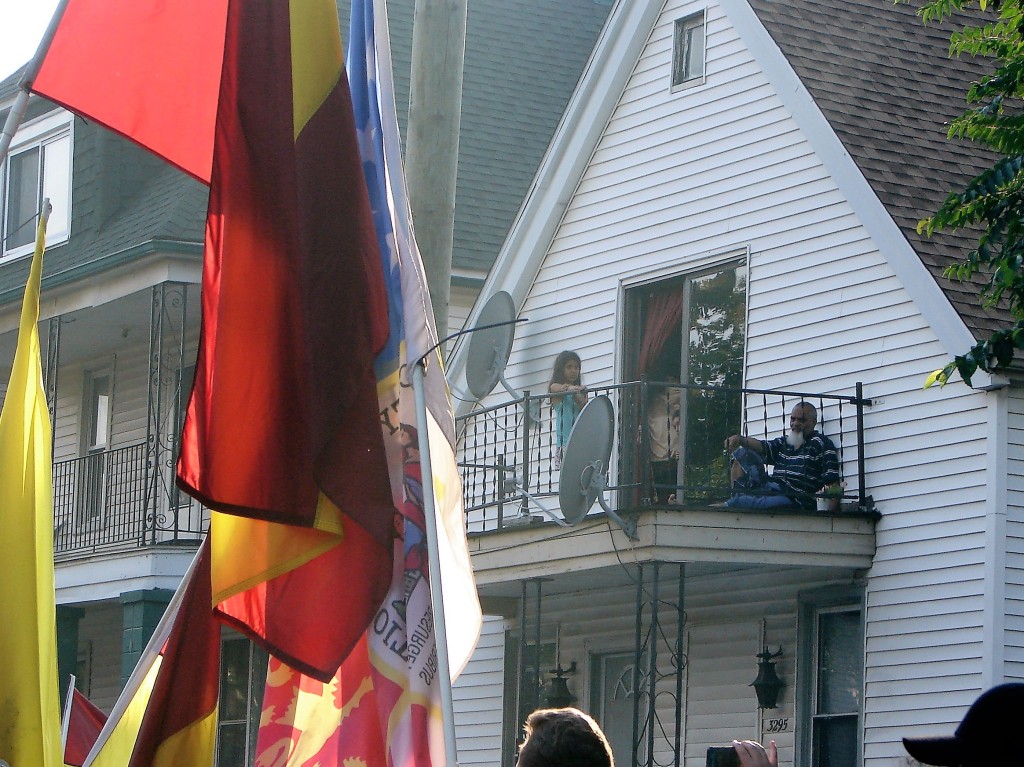 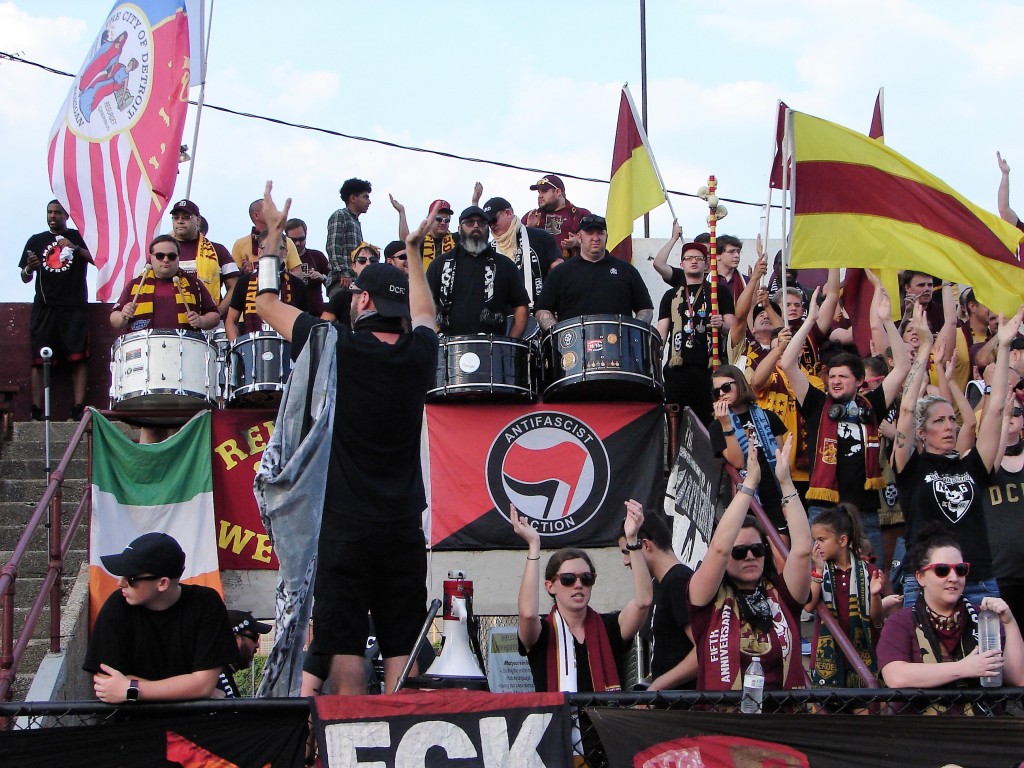 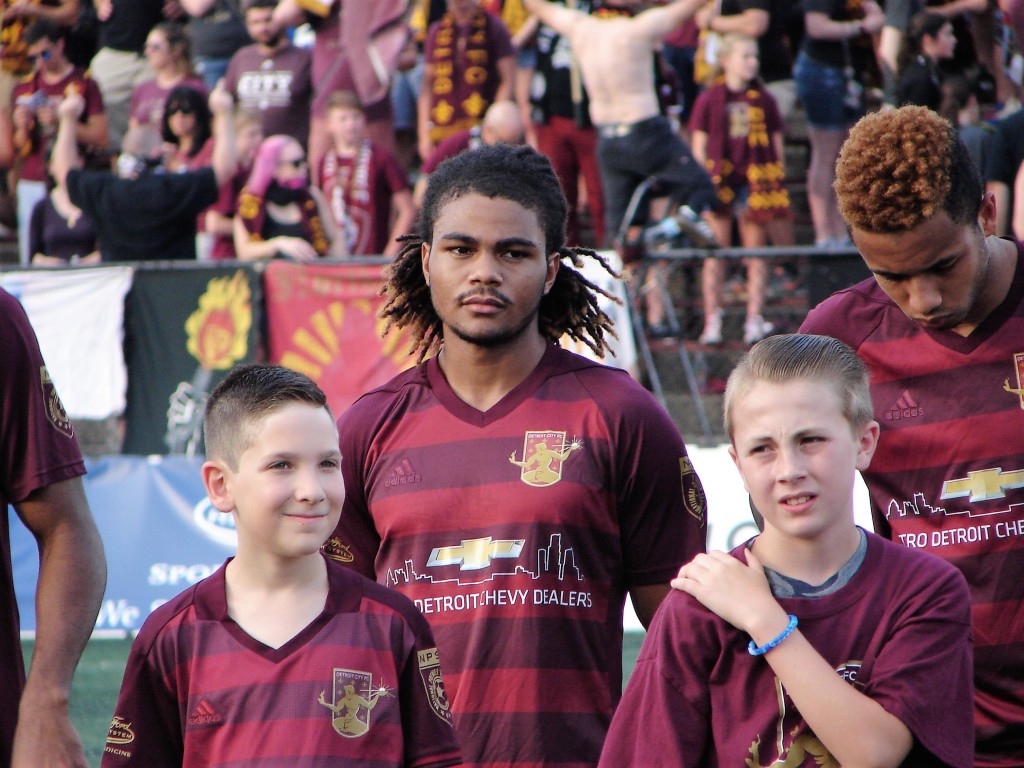 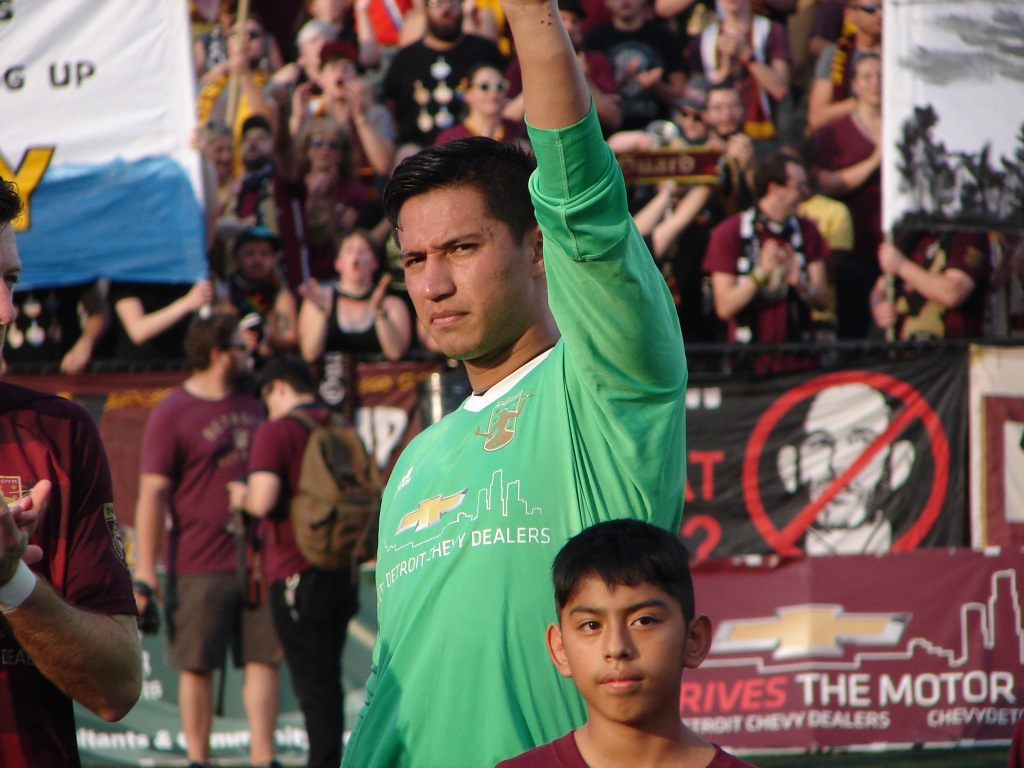 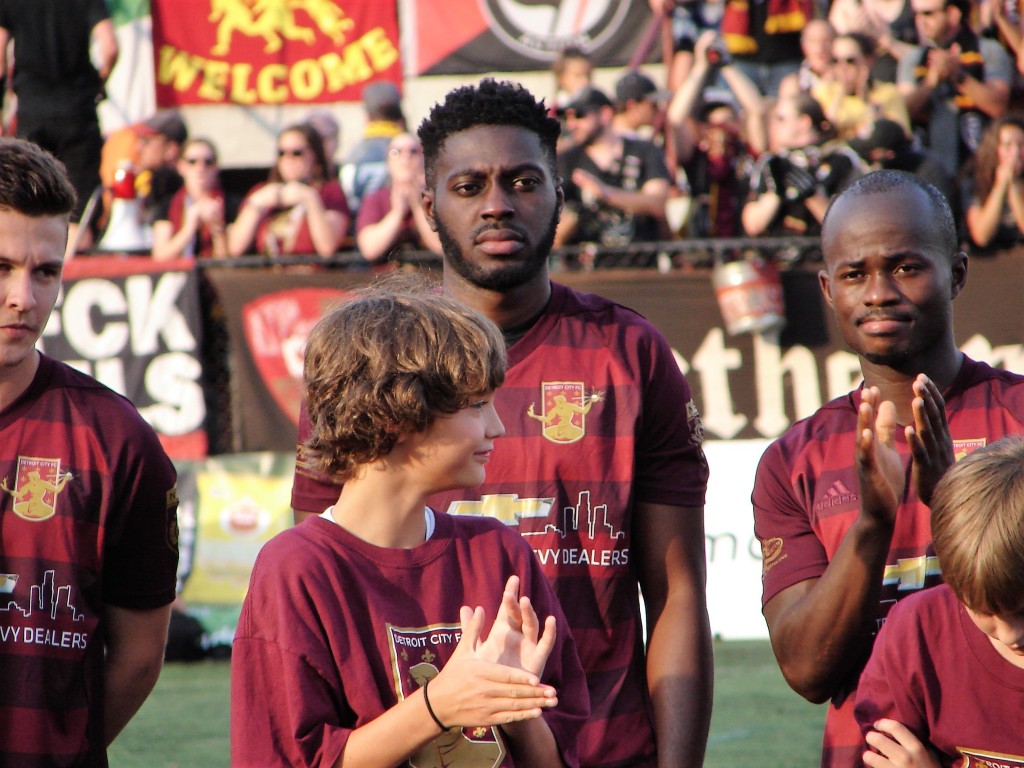 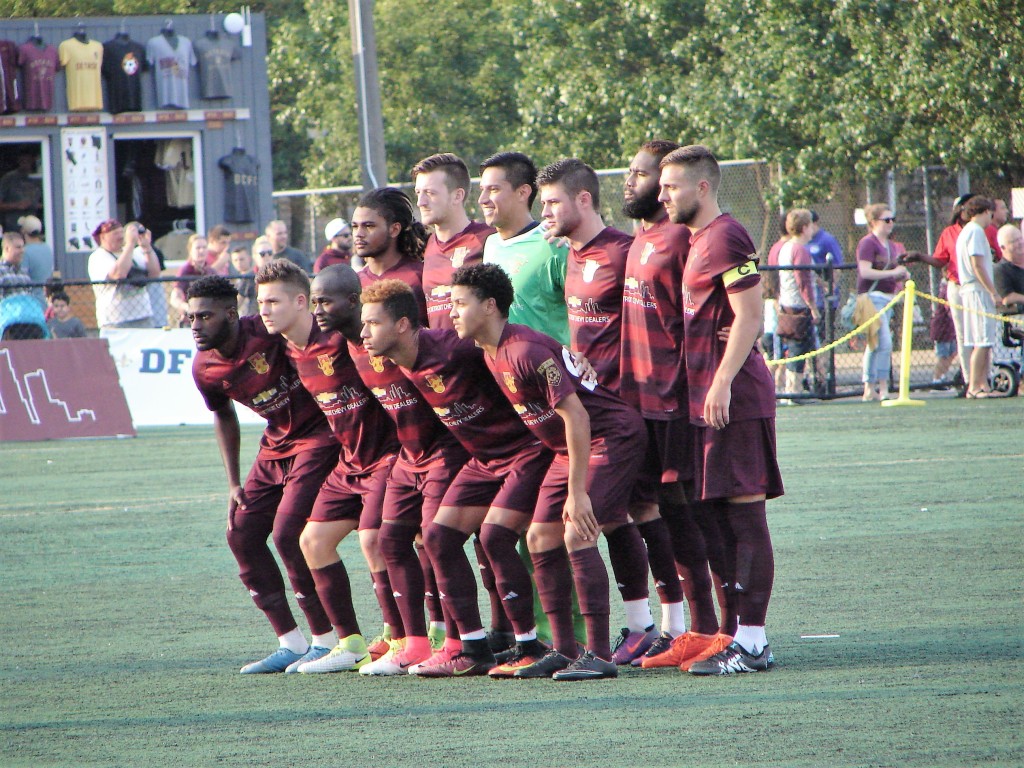 I took my usual position, in the end where City attacked, but the photo opportunities were limited.  Ann Arbor took control of the play. 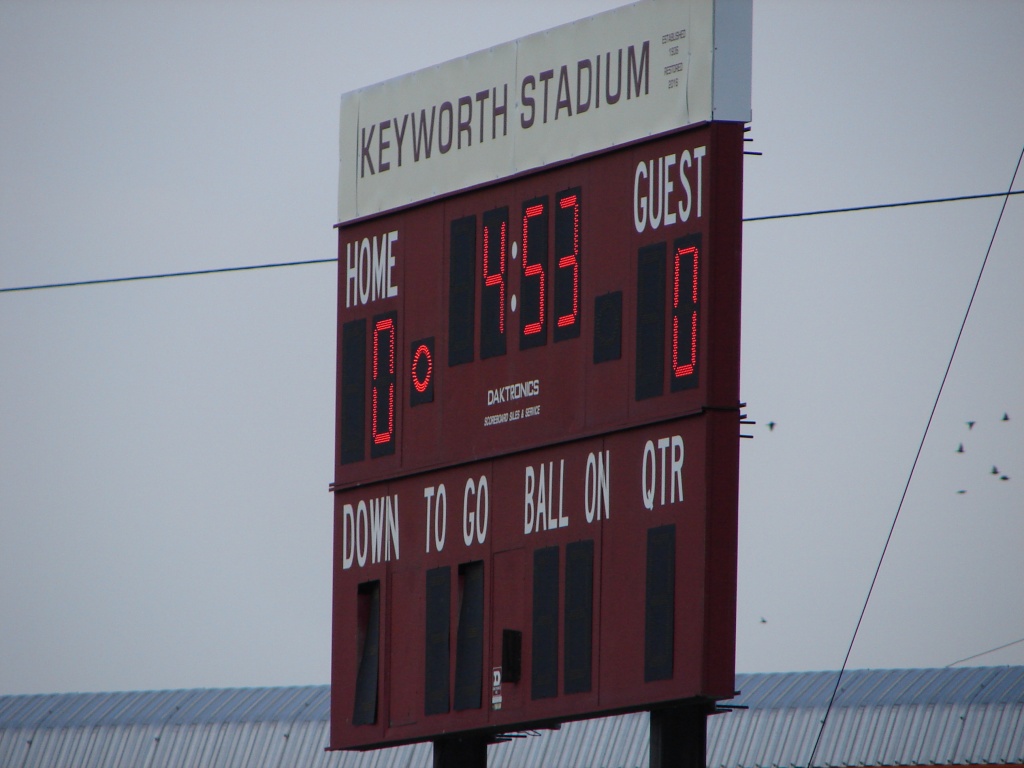 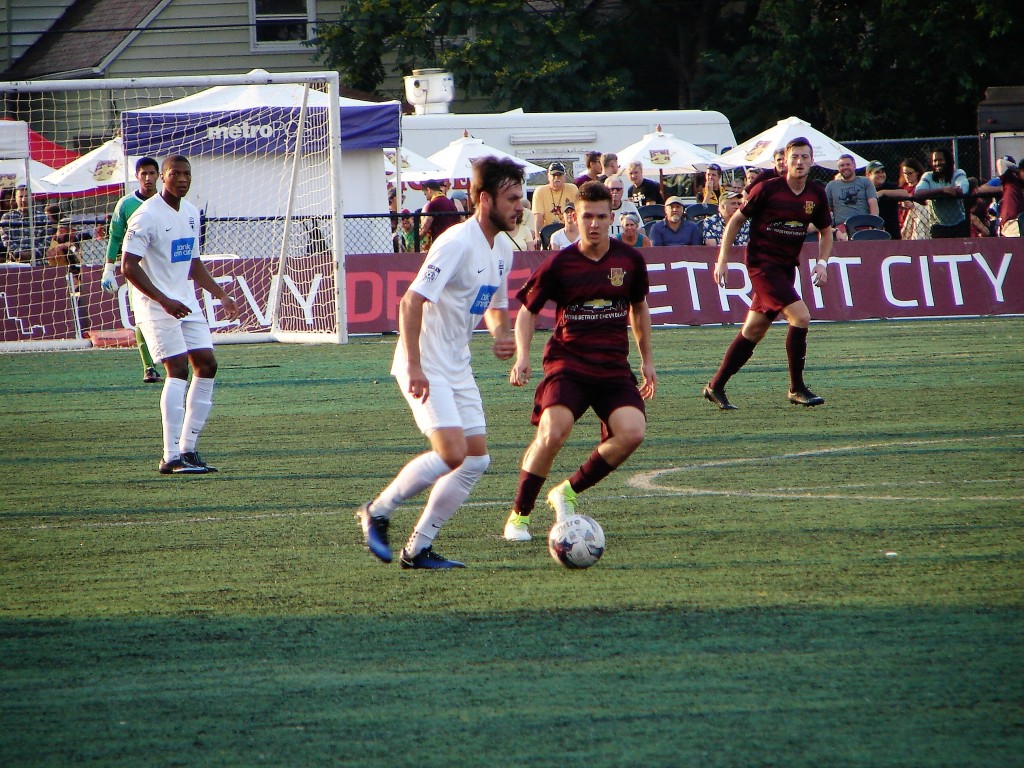 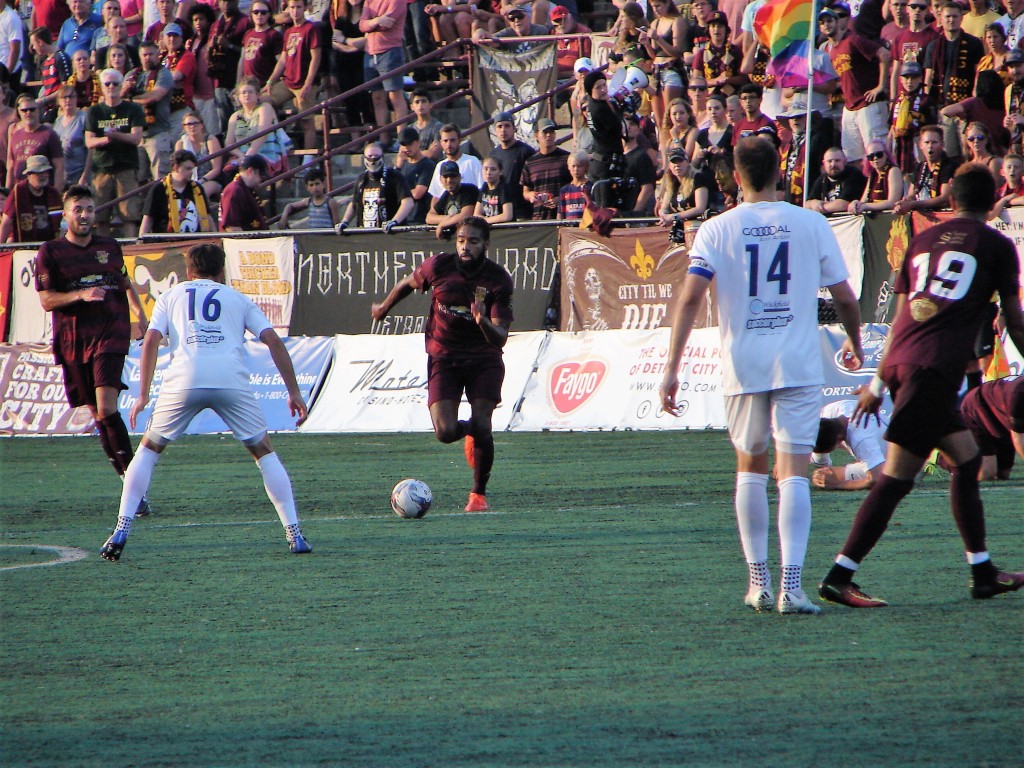 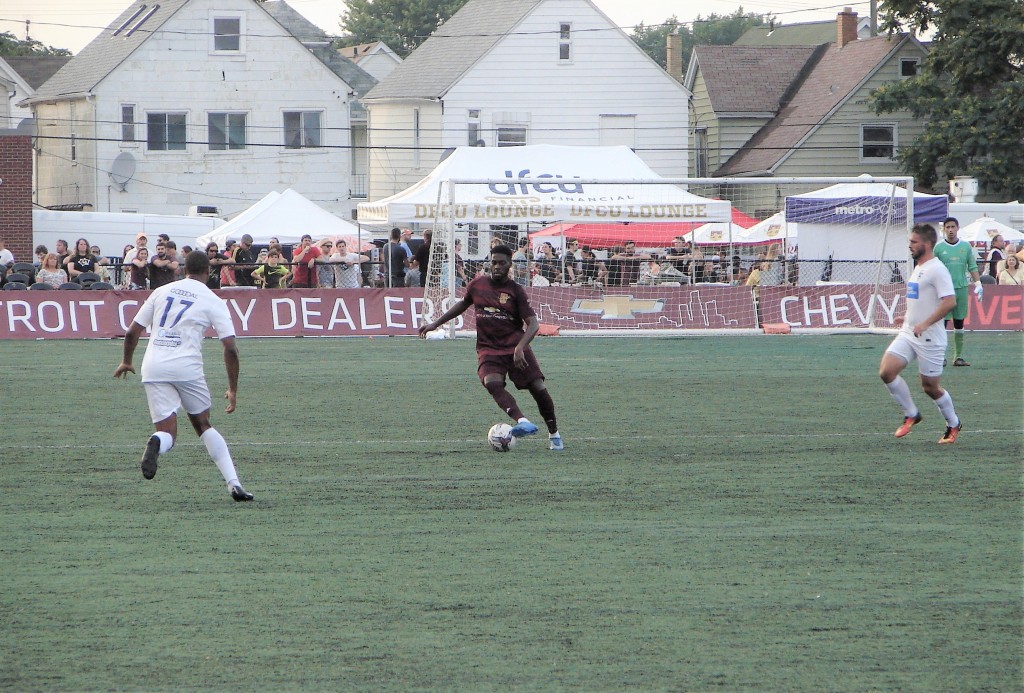 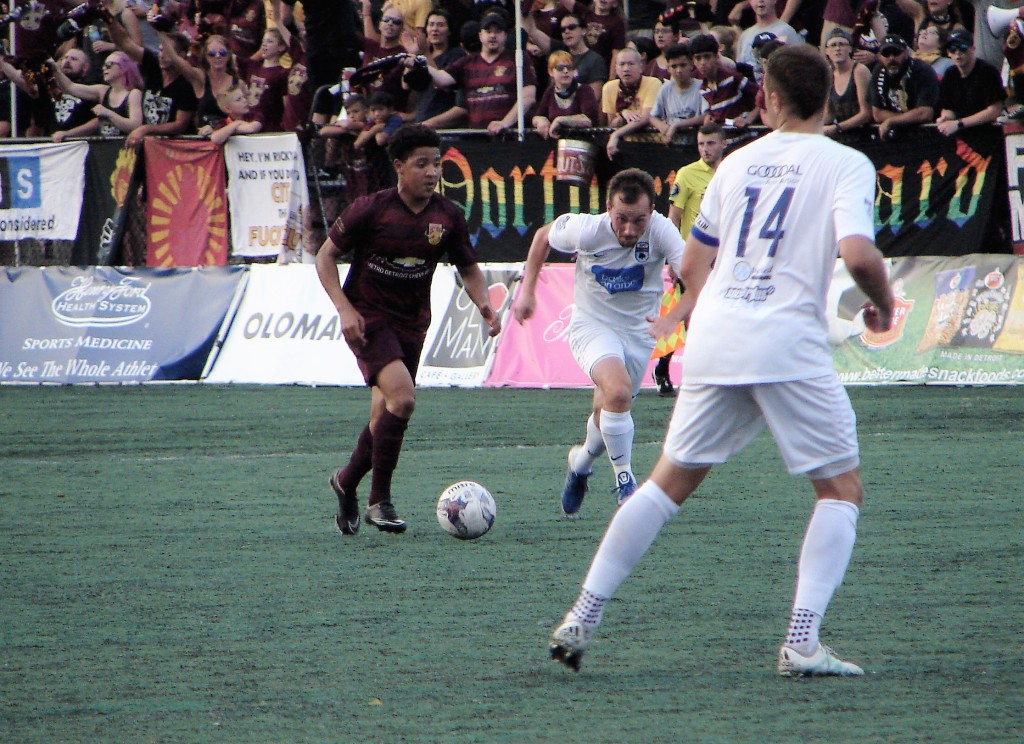 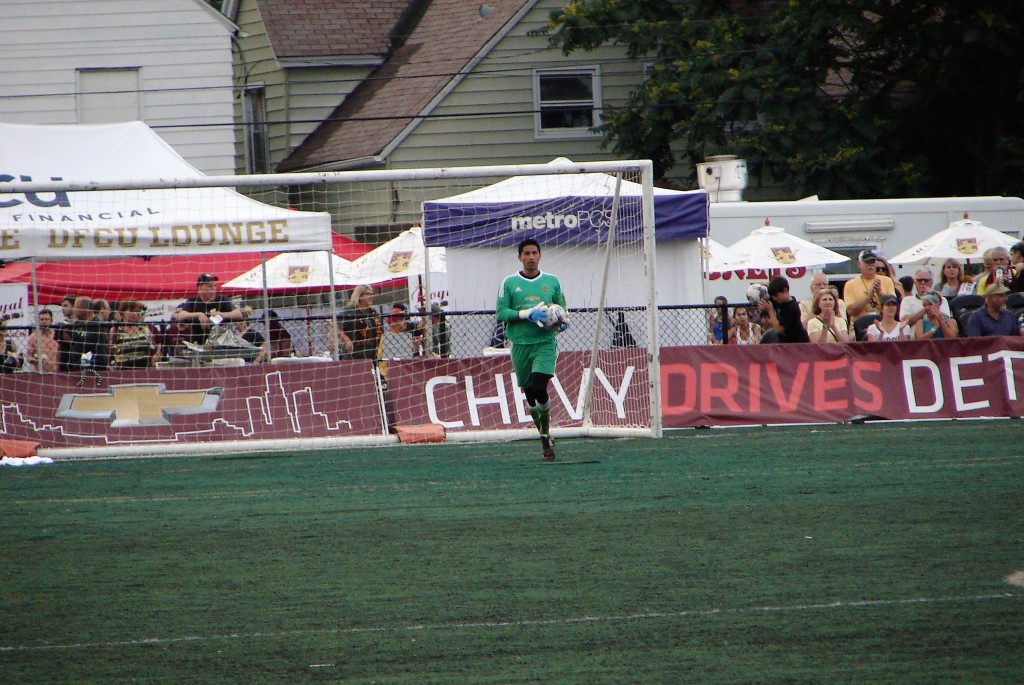 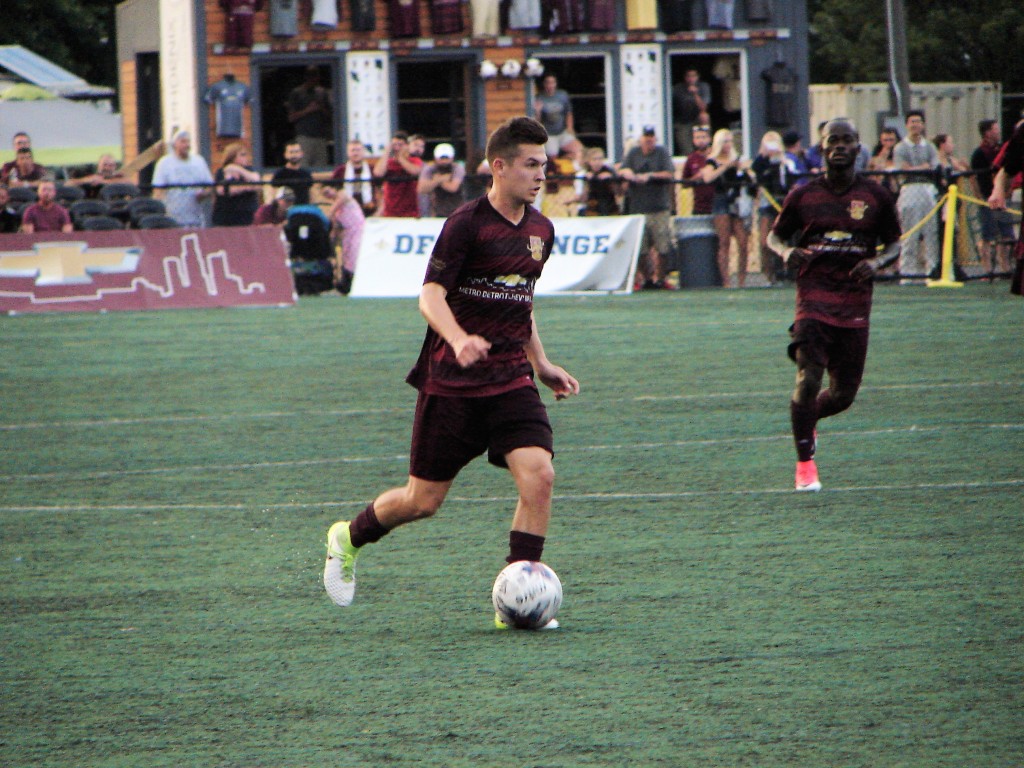 As the half neared its end, Kervin Kenton found Elijah Rice with a pass, and Rice buried it past Ann Arbor’s keeper, TJ Tomasso. 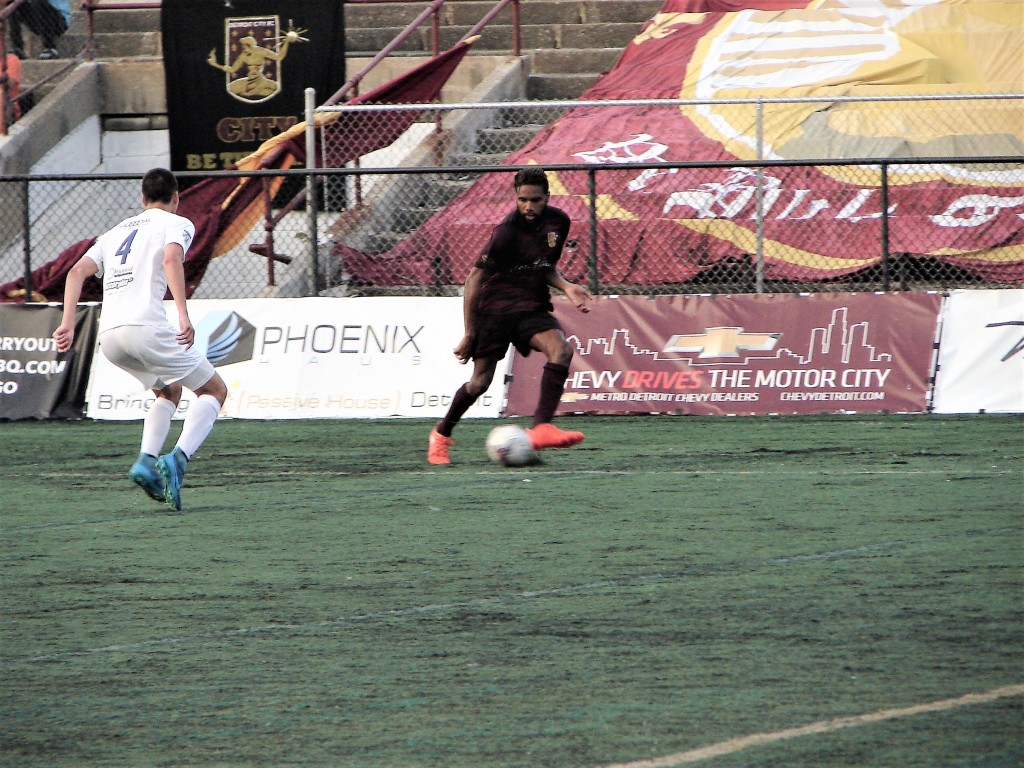 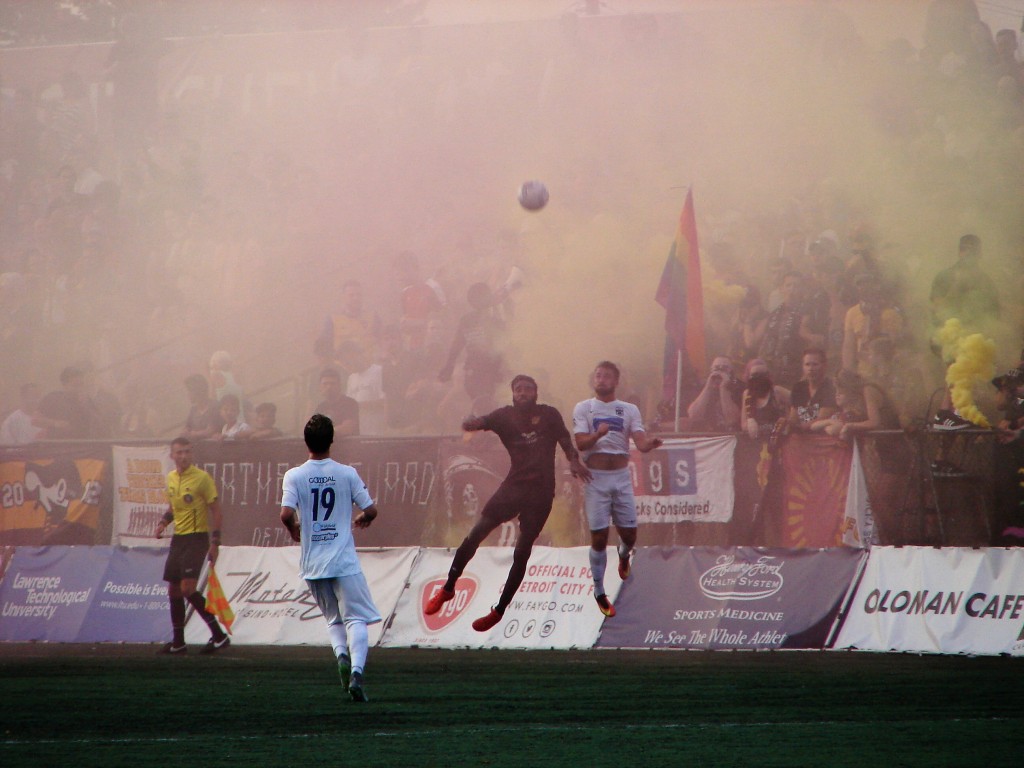 In the second half, the winning streak was broken, among other things.

A free kick taken from outside the box by James Vaughan beat Fernando Pina in the 57th minute to level the match.  In the 64th minute, Alec Lasinski, controlled the ball after it pinballed among City and Ann Arbor players, and shot it past Pina to give AFC Ann Arbor a 2-1 lead.

In the 70th minute, Kervin Kenton and Ann Arbor’s Kwessi Allen chased an over-hit pass down the line.  I was standing behind the end line, taking a quick glance toward the net to prepare for Kenton to catch up to it and cross it.  But it traveled too fast and he and Allen were trying to slow down as they approached the end line.  Kenton went to ground, sliding to my left.  A security person was behind me.  I decided to remain stationary, to allow Allen to go to my right, but instead he made contact with me, sending me to the pitch.  I picked myself up, thinking my pride was the only thing injured.  As the match went on, my left wrist began to throb.  It swelled overnight, and after a visit to Urgent Care the next day, an x-ray showed an acute fracture.

A foul in the penalty area in stoppage time allowed James Vaughan to score his second, Ann Arbor’s third goal on the night.

The nine-game winning streak, broken.
My wrist, broken.
This match was broken when the football gods flooded our pitch just four days ago, when we had the momentum and the hunger.
For the first time in a month-and-a-half, we, as a team and supporters, had to regroup.