While in Ann Arbor in late June, I stopped at Literati Bookstore to browse, where a flyer caught my eye. 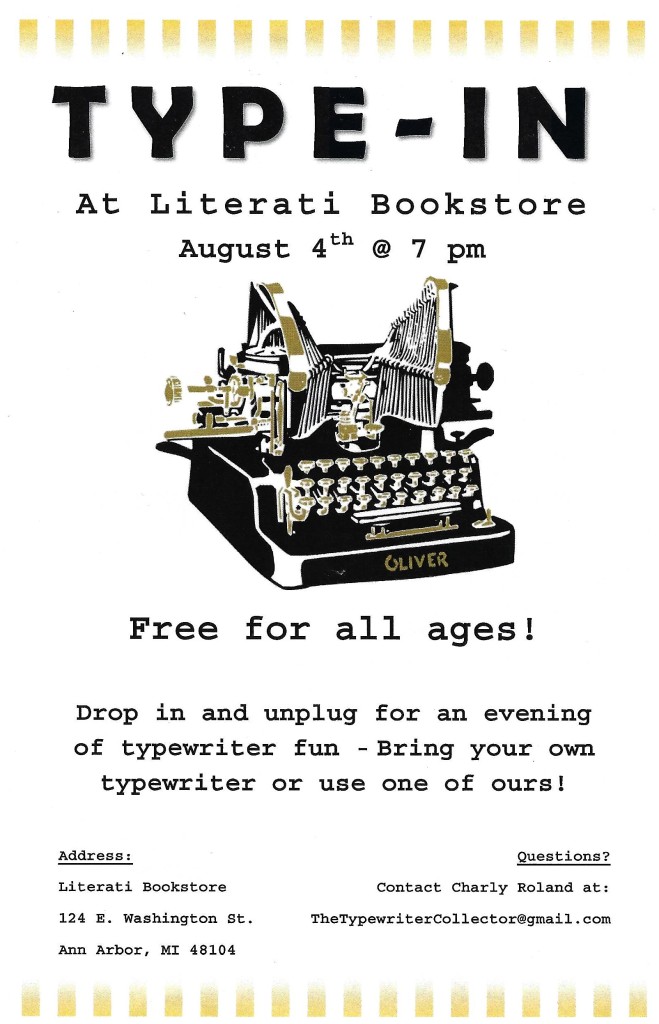 I had seen other type-ins publicized around the state and country, but nowhere near me.  I was both excited and confused.  What do you do at a type-in?  After enlisting the advice of others who have attended them, I decided that I’d like to test-drive as many of the machines that were there.

The flyer said to bring my own, if I wanted.  Hmm.  Which one?  I decided to share my favorite portable – a 1954 Olivetti Lettera 22.  So I packed it up, and set out for Ann Arbor through a maze of weekend road closures due to construction.

Literati Bookstore is the ideal location for a type-in.  Co-owner Michael Gustafson’s grandfather’s 1930’s Smith Corona was the inspiration for the store’s logo.  When the doors opened in 2013, Mike placed a typewriter – an Olivetti Lettera 32 – in the lower level of the store, for the public to use.  A collection of some of the notes left on that public forum was published in Notes from a Public Typewriter (Grand Central Publishing, 2018).

Hosted by Charly’s Typewriter Collection and Repair, I met Charly as she and her assistants were setting up.  I added my Lettera to the long table, and soon others joined in.  Before long, the sound of clacking filled the cafe area. 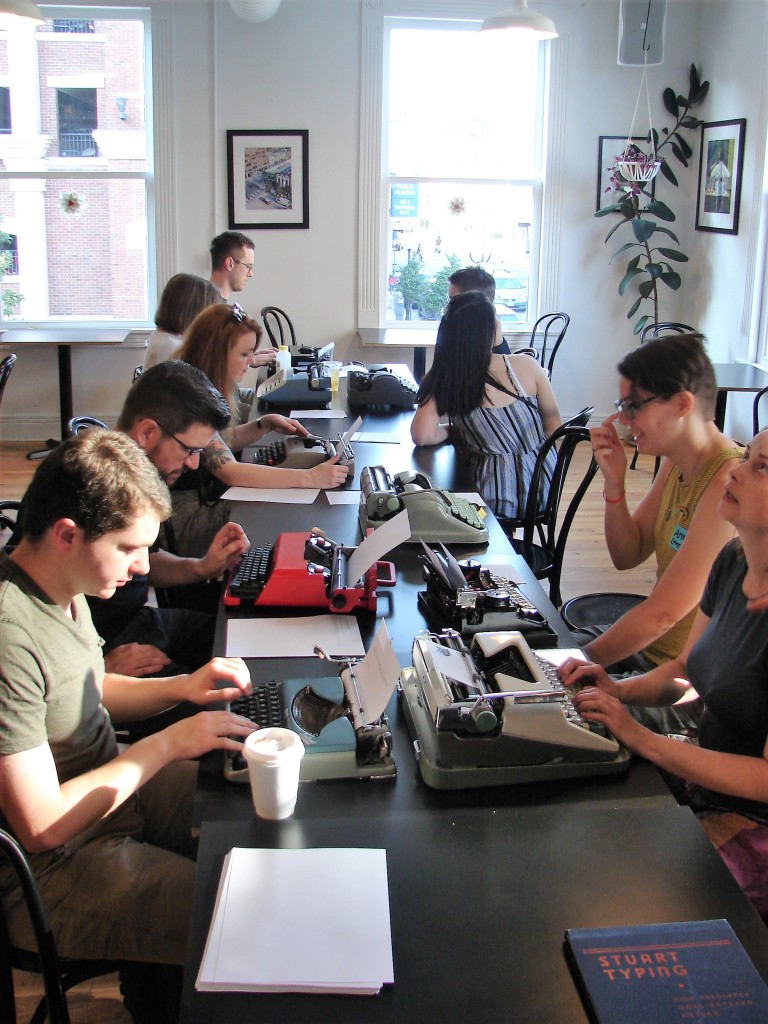 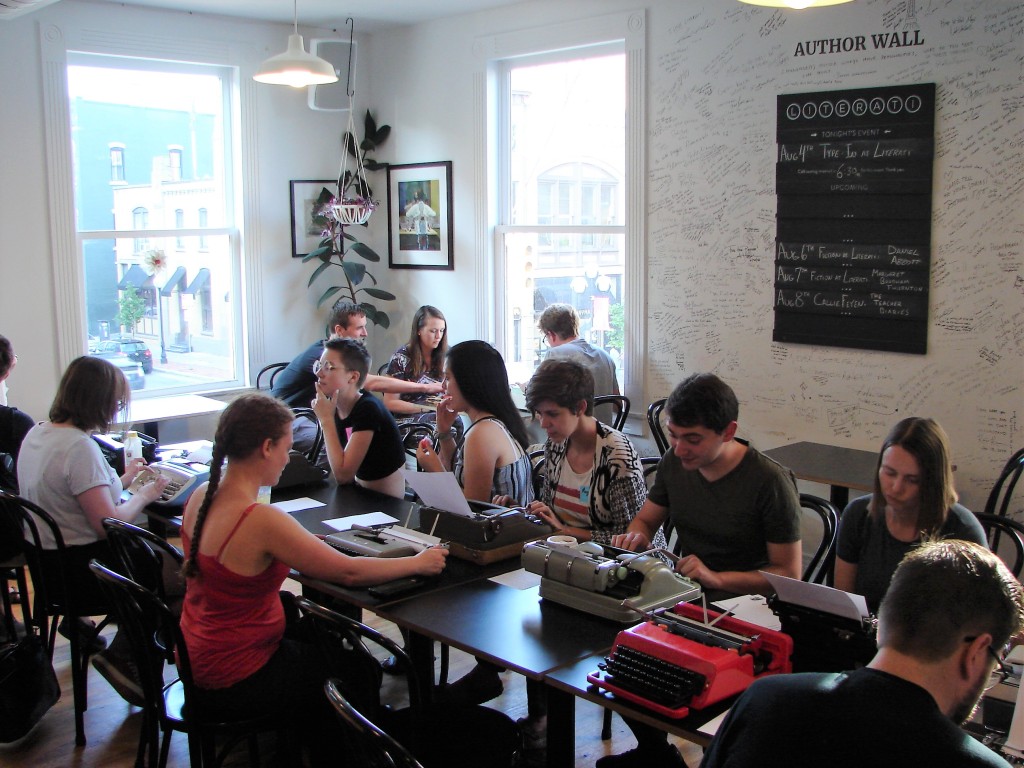 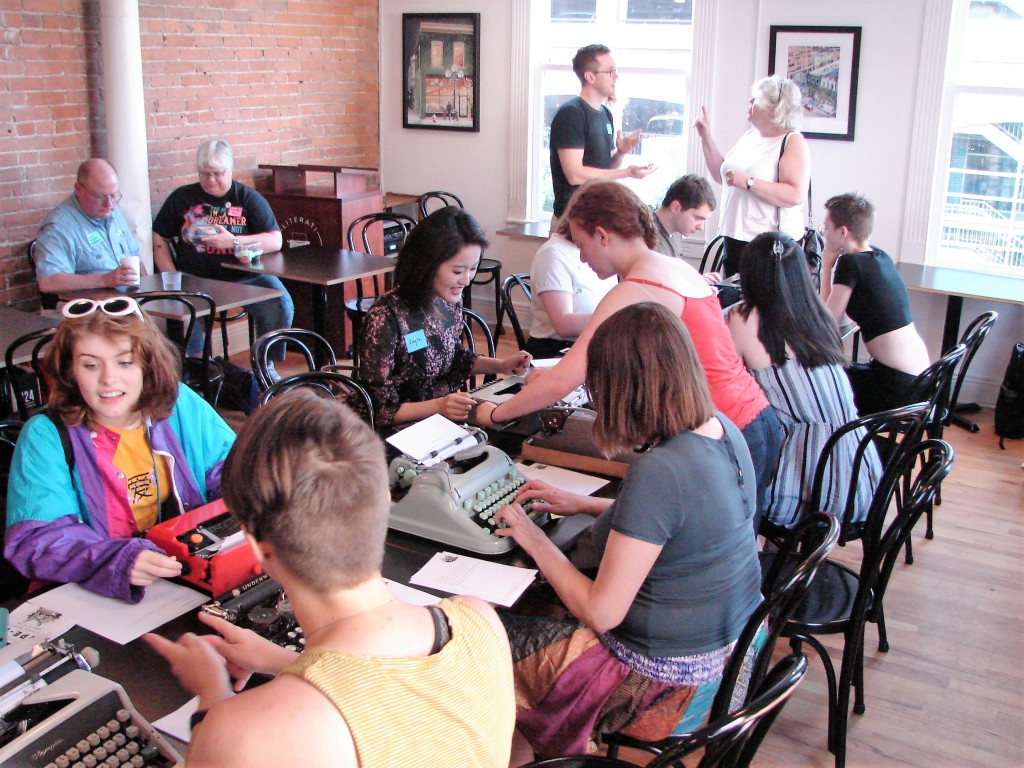 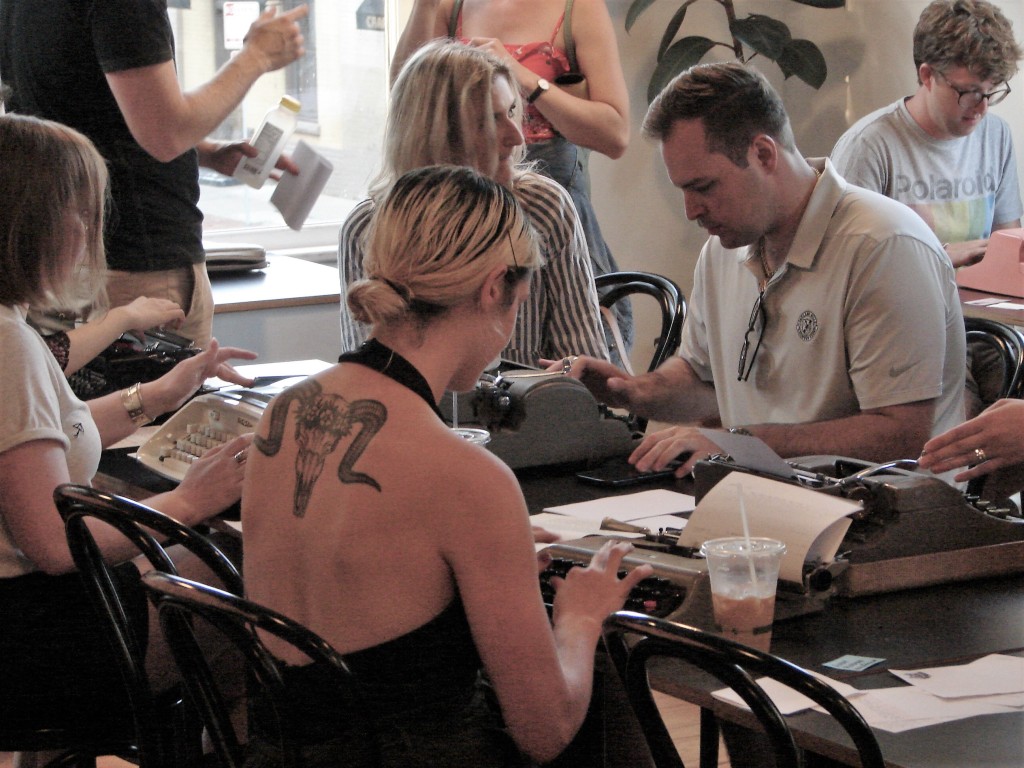 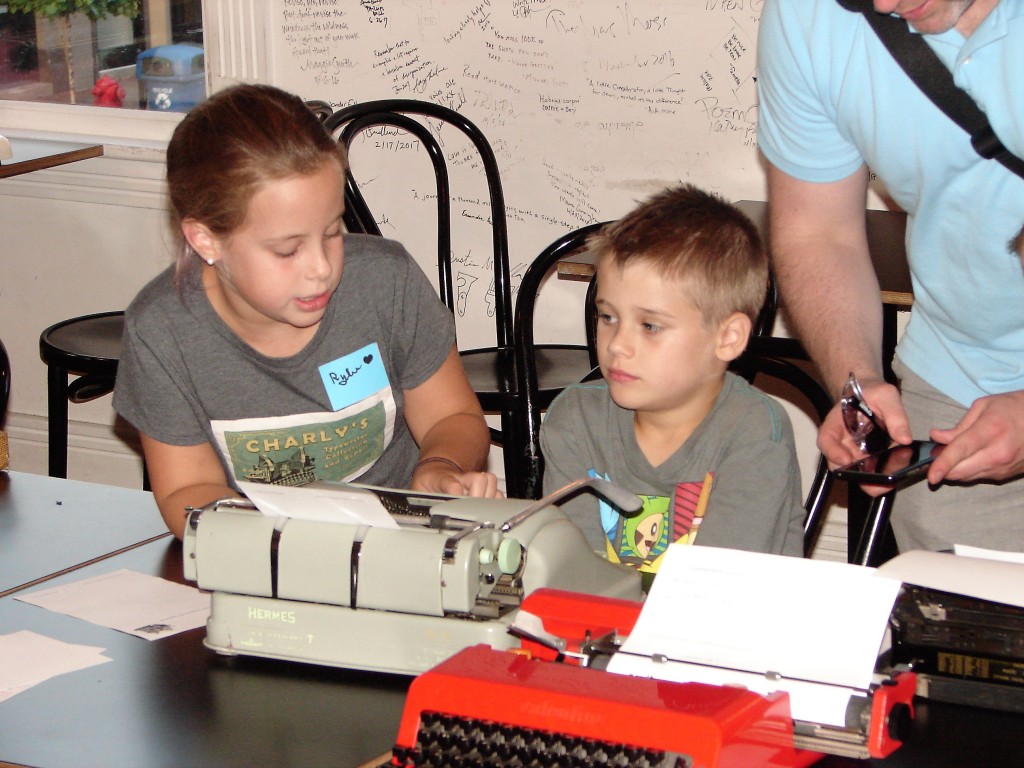 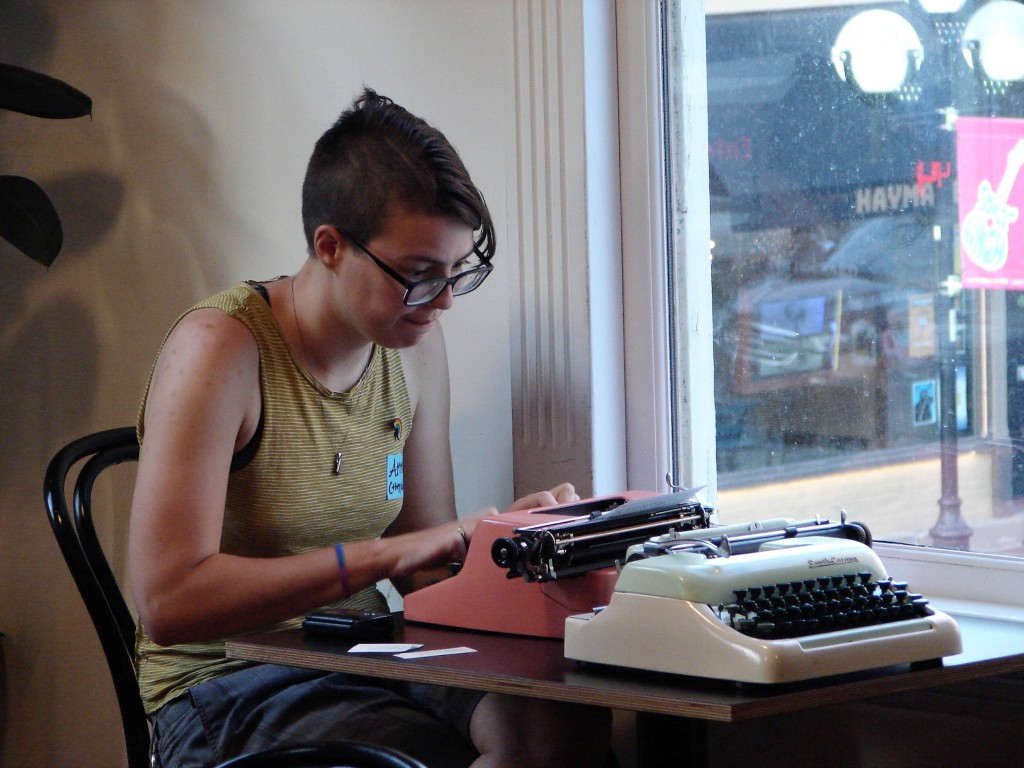 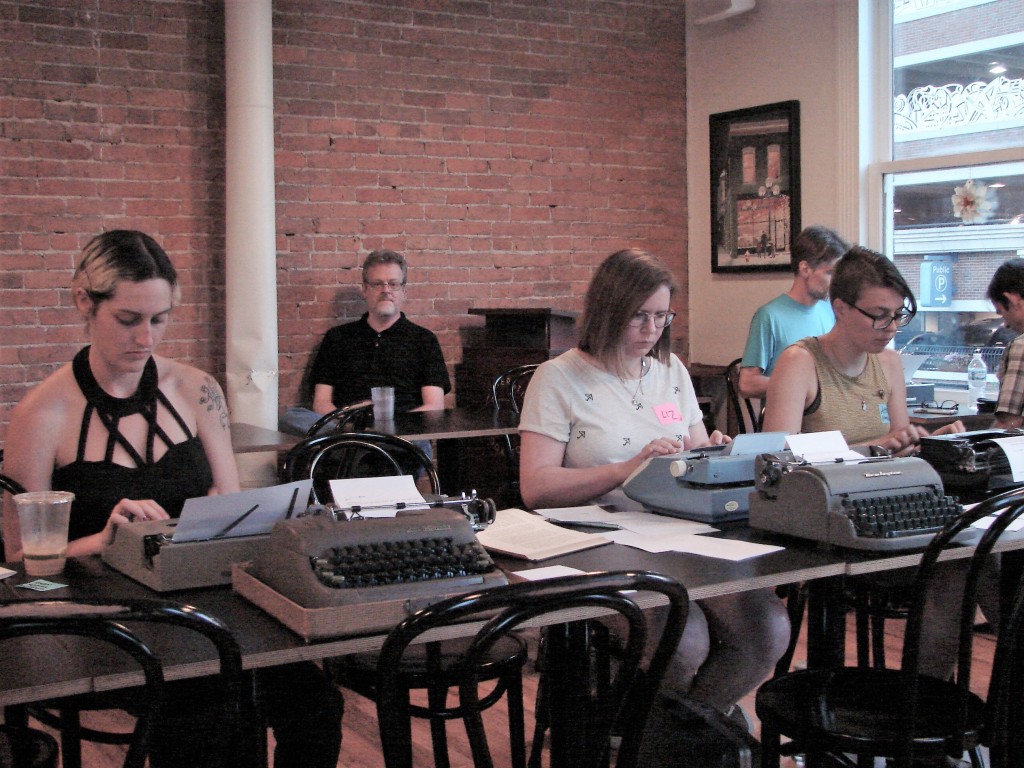 There were over a dozen typewriters in the space, and I shot photos of most of them.  Included was Michael Gustafson’s grandfather’s 1930’s Smith Corona…

…a Neckermann Brilliant Junior, made in Communist East Germany in the mid-1950’s (note that the Y key and Z key are switched, and other German letter keys on the right hand side.)…

…a 1923 Underwood 3-bank, which has a cap-shift to capitalize the letters, and a figure-shift if you want to type the number or punctuation mark above the letter…

Here are some of the other cool machines… 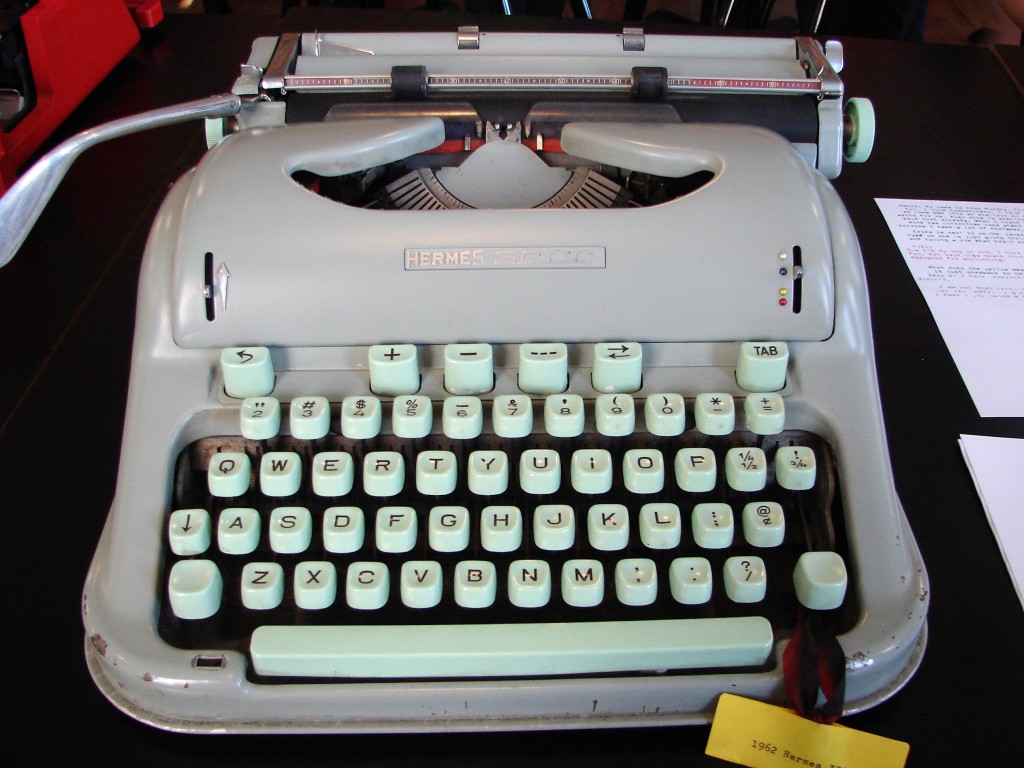 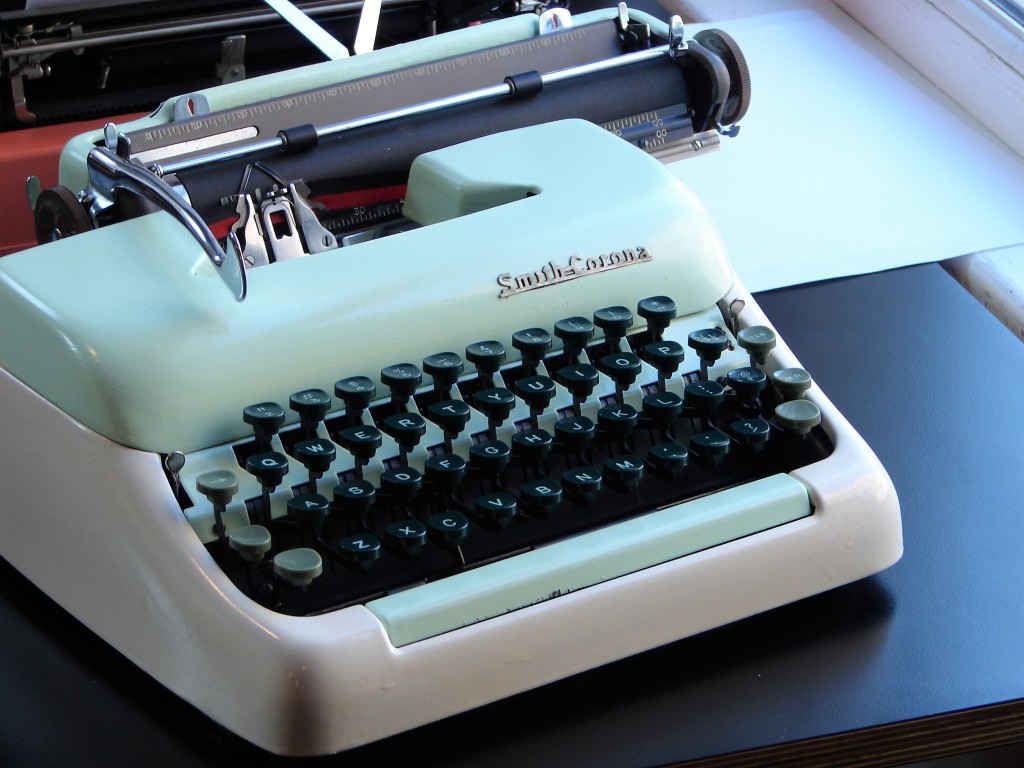 A few observations:
-A predominantly young crowd was embracing and/or sampling this analog technology.
-A young lady spent a lot of time at my Lettera.  I thought she may have been working on a novel, but instead she was typing from an old Stuart Typing Manual that was on hand.
-Everyone was engaged in what they were typing, and enjoying the camaraderie.

On my small sheet of paper, I did a little sampling, as I hoped.

I had a great time, and from the looks of it, so did everyone else.