The week before this match a friendly was scheduled at Keyworth against Western Michigan University.  However, freezing rain made conditions unplayable, so our first match of the season was on the road in Chattanooga.

Chattanooga FC was established in 2009, and their supporter group – The Chattahooligans – have developed a significant following for an NPSL team.  Their supporter culture similar to ours, which focuses on club, community, inclusion, and providing a presence at CFC matches, made them a natural friendly opponent for some time.  This year, a home-and-home pair of friendlies provided the opportunity for us to meet and mingle.

I booked a room at a quaint, boutique hotel that was conveniently located around the corner from an Indian restaurant. 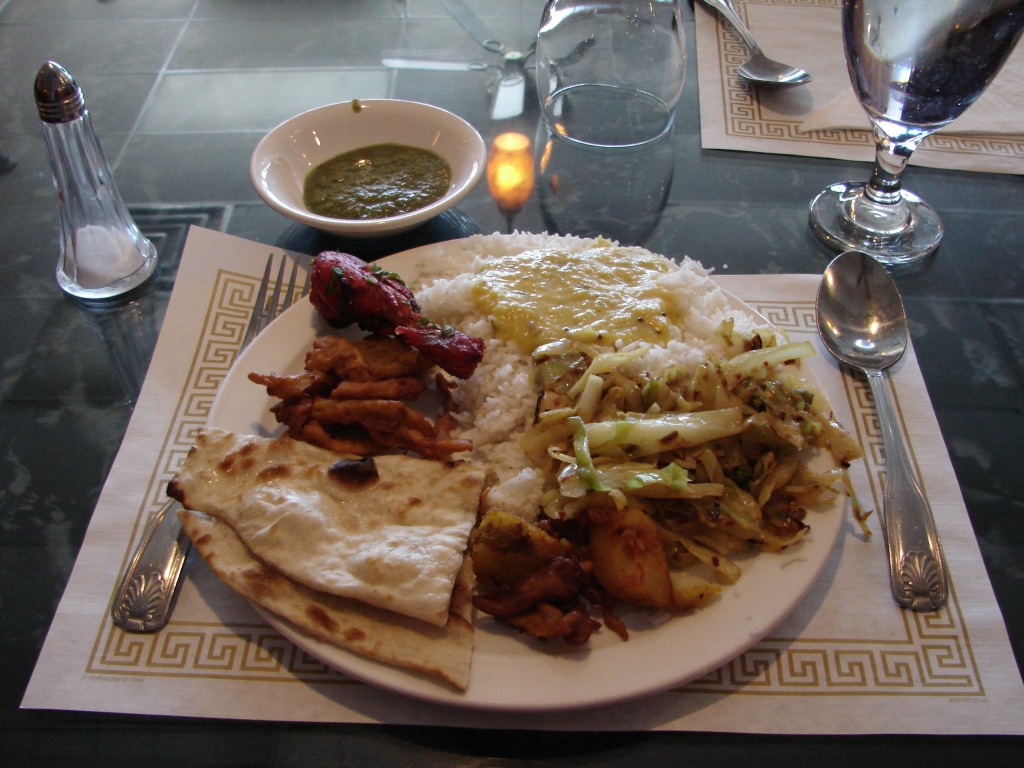 The day was hot – in the 70’s – a contrast from the previous weekend’s freezing rain in Detroit.  With time to kill before the game, I drove downtown, near Finley Stadium, to see what was to be seen.

Of course, if there is an independent bookstore to be found, I’ll find it. 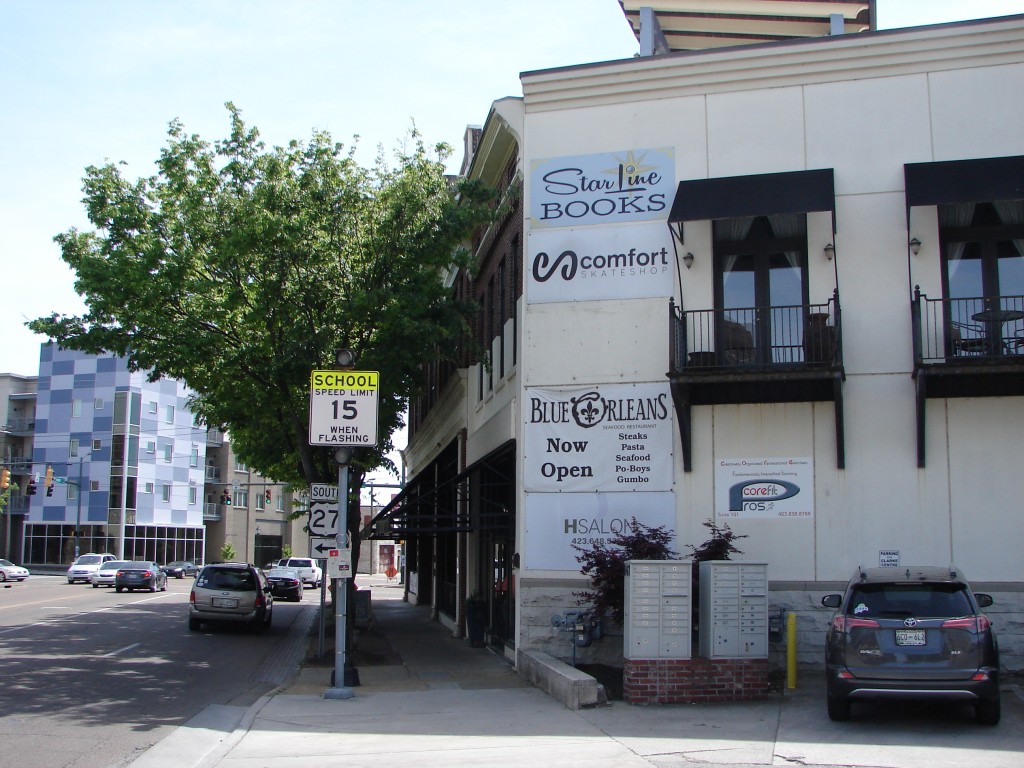 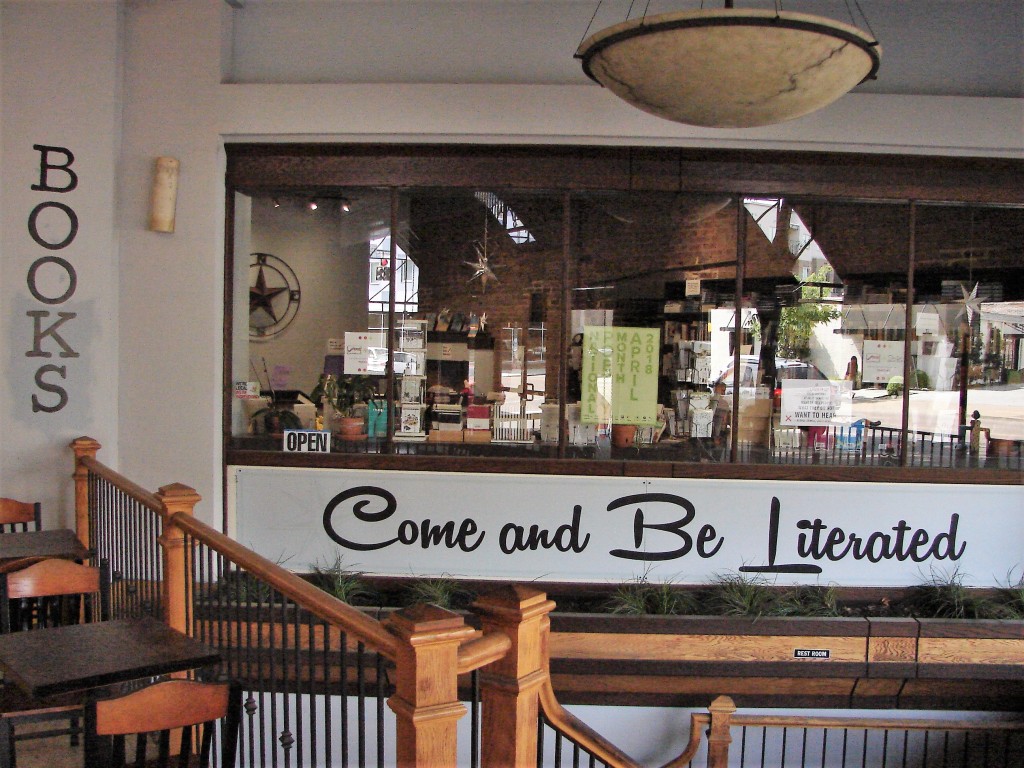 I asked a local where I could buy some sun screen, and was guided over a bridge to a chain drug store.  Driving over it, I noticed its pedestrian walkways.  I found the drug store, bought the sunscreen, drove back over the bridge, then parked.  Camera in hand, I took a walk along the bridge over the Tennessee River.

On this Saturday in April, wedding photos were being taken on both sides of the bridge.

Then, it was on to Finley Stadium to meet up with the traveling Rouge Rovers and host Chattahooligans. 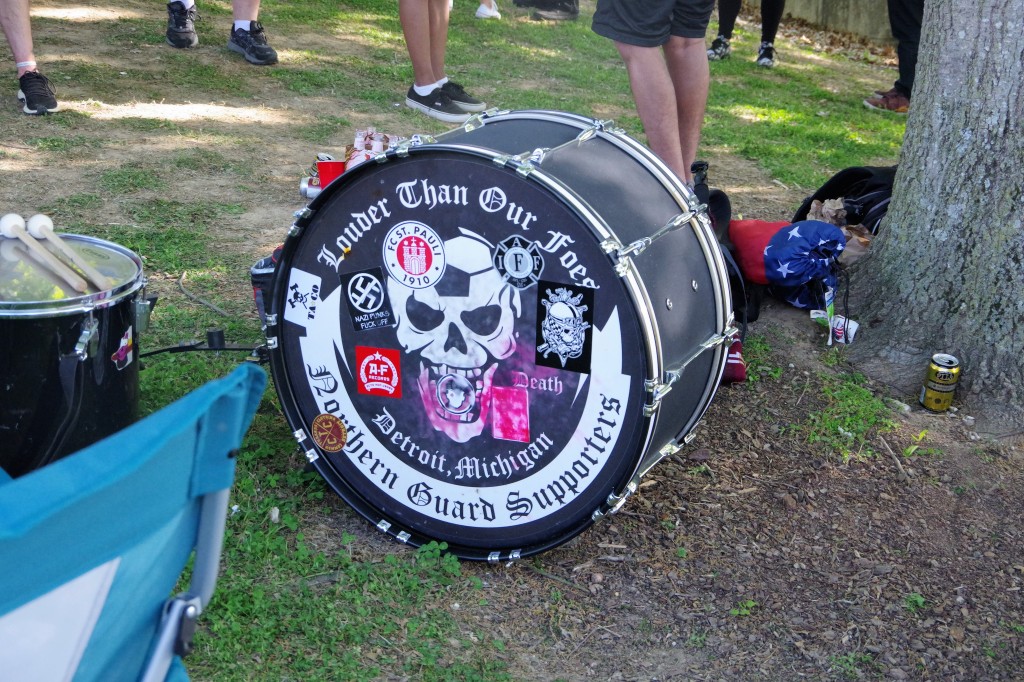 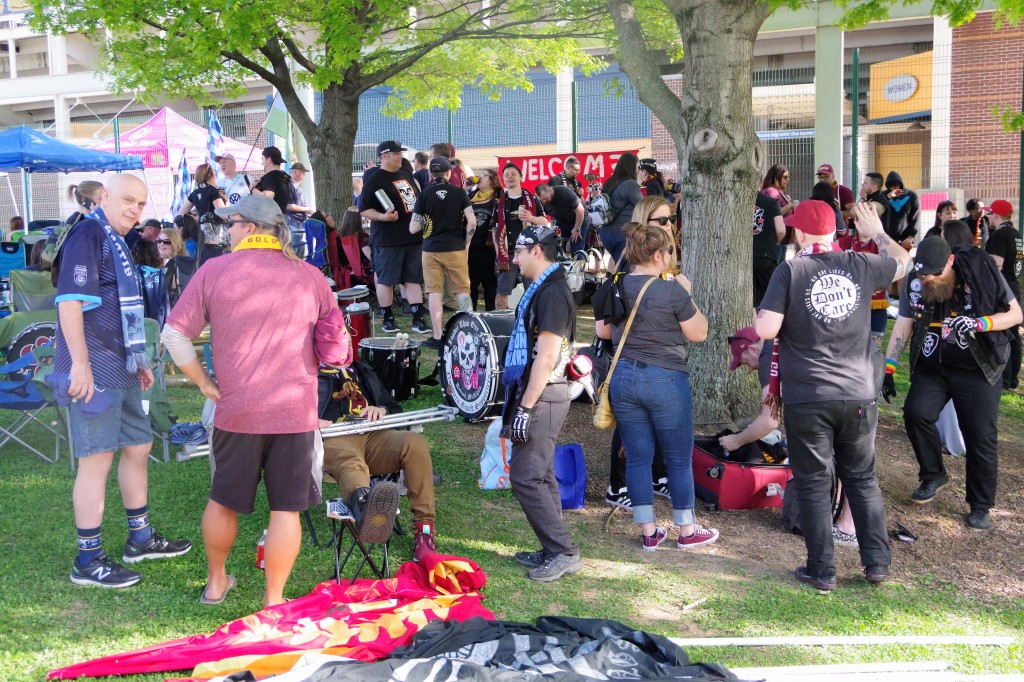 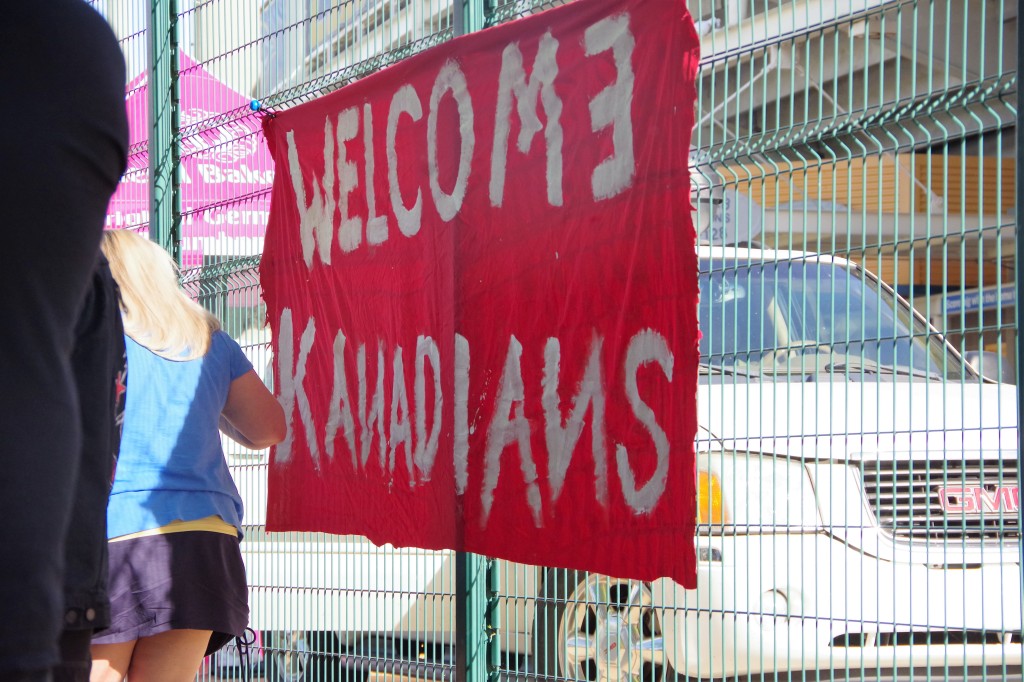 Being within the Southern Bible Belt, there was concern about our uncensored language.  But the Hooligans had our backs.  They arranged the seating so that the Northern Guard would sit at one end of the sideline, those who wanted to be sheltered from our language on the other end of the sideline, and the Chattahooligans in between. 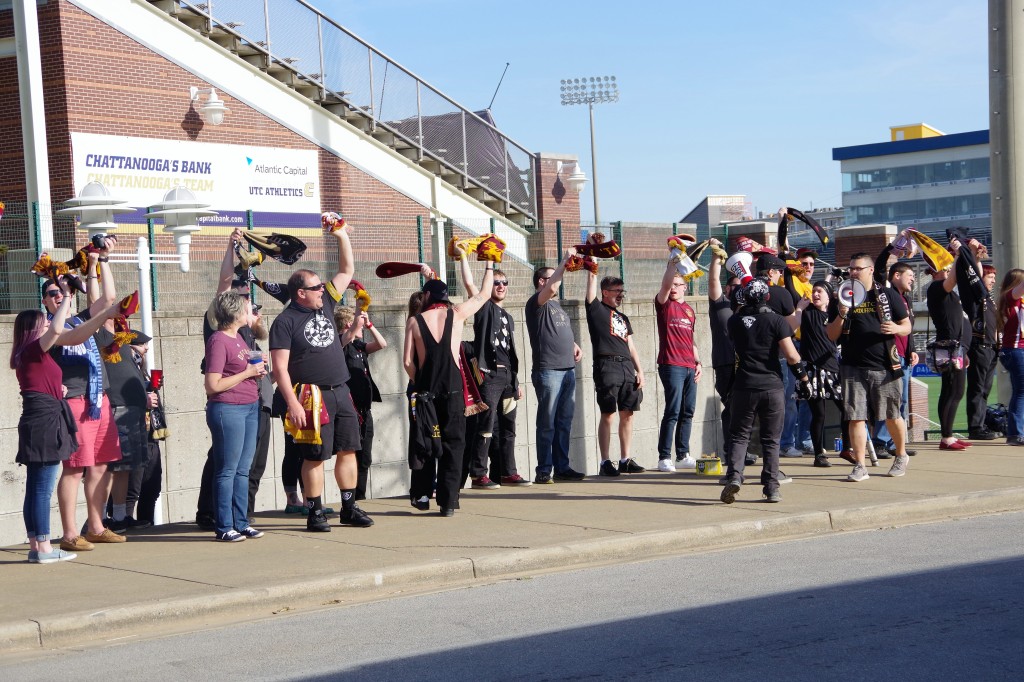 One of the best things about this day was seeing Amanda back in our fold.  Last season during the playoffs, she had been struck by a truck while riding her bike to work, nearly killing her. 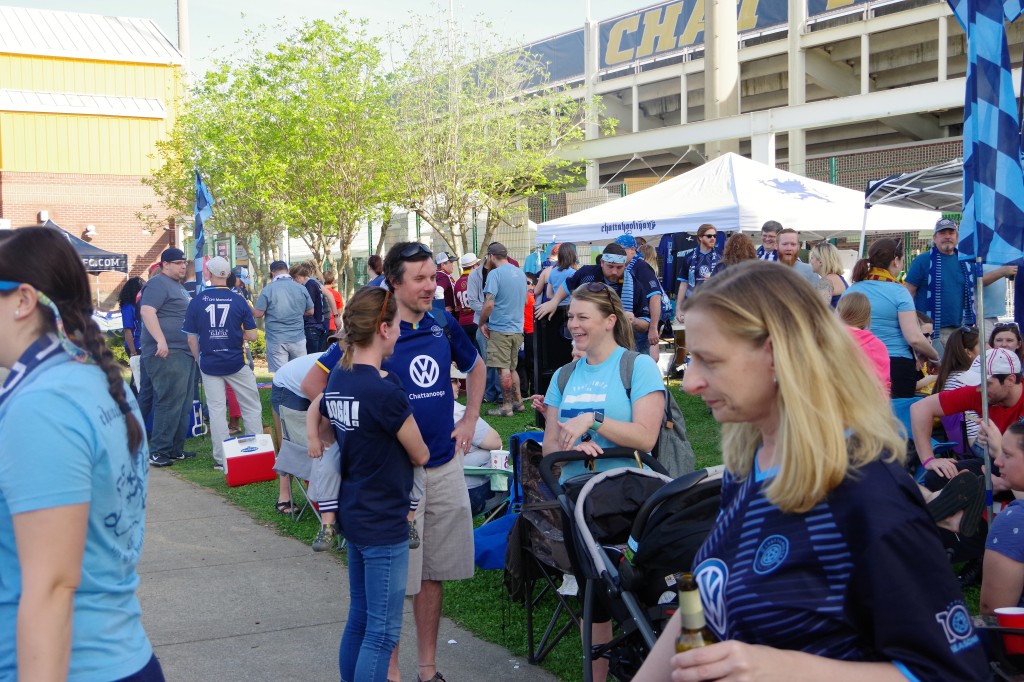 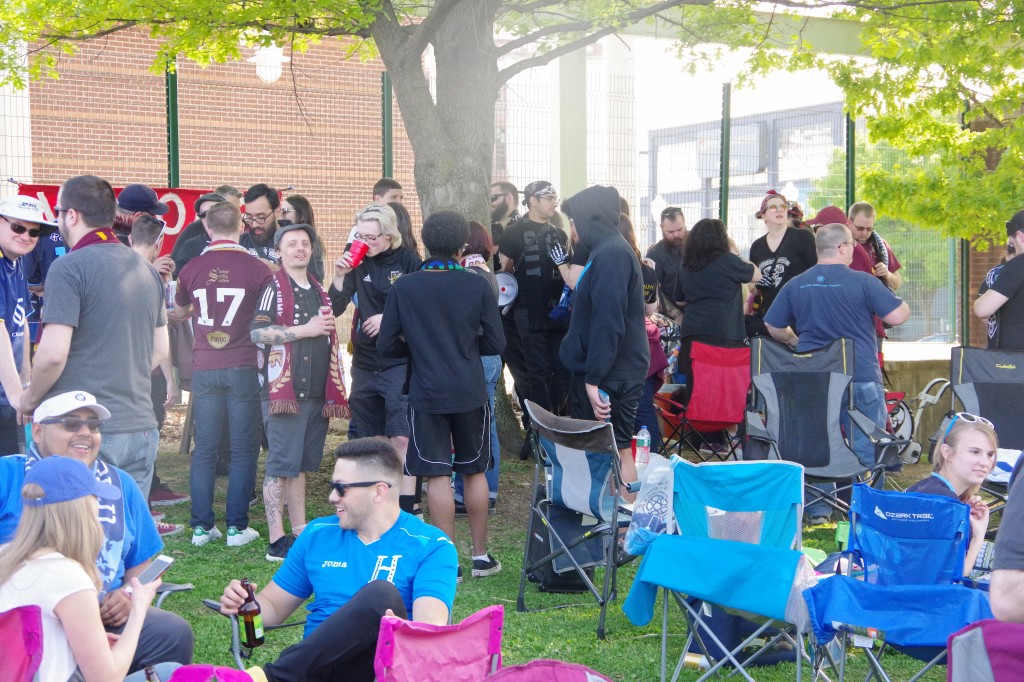 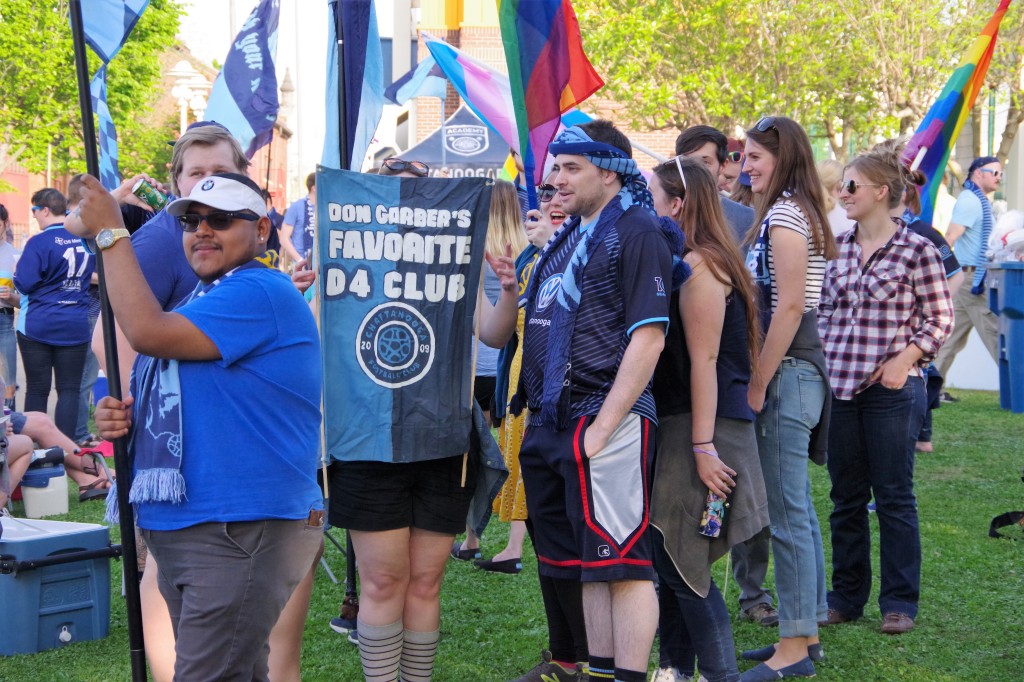 After much mingling and consuming of spirits, and with the gates about to open, the friendly community turned to friendly competition. 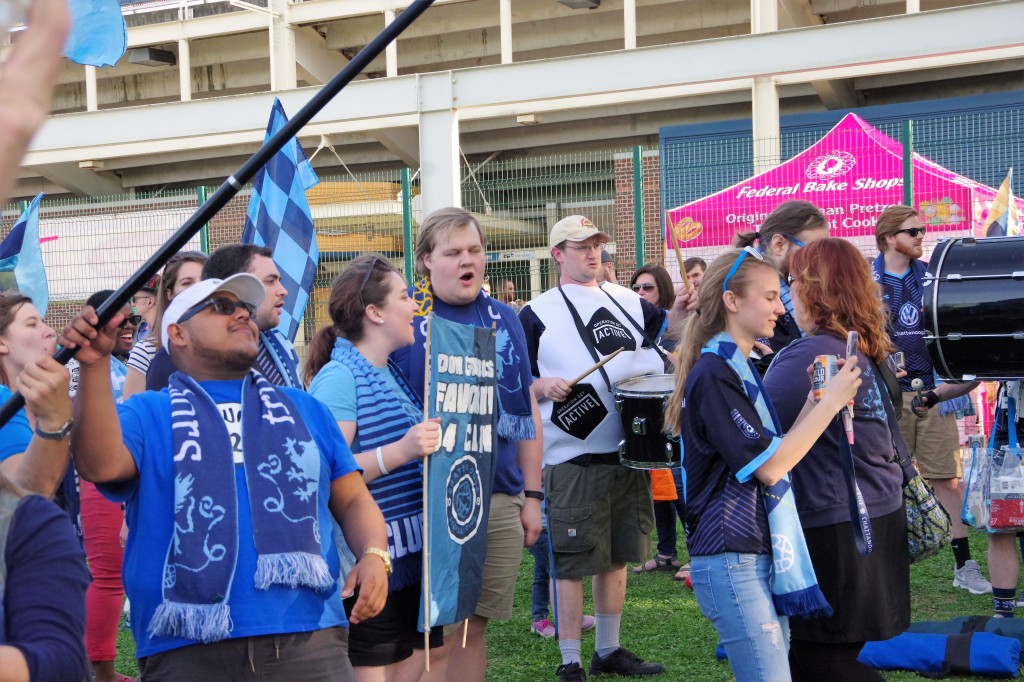 On to the match…

As I made my way around to the opposite side of the field, a man caught my eye and asked me to take a photo of his kids, telling them that they were going to be in the newspaper.  To oblige, I took the photo.  Maybe they’ll find this page and see it. 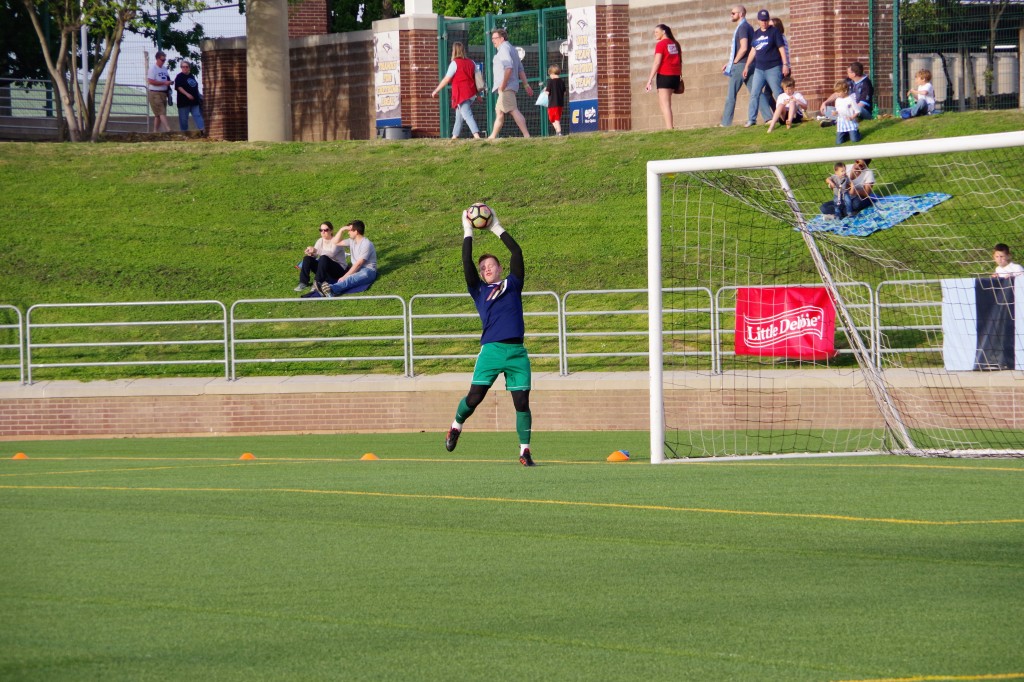 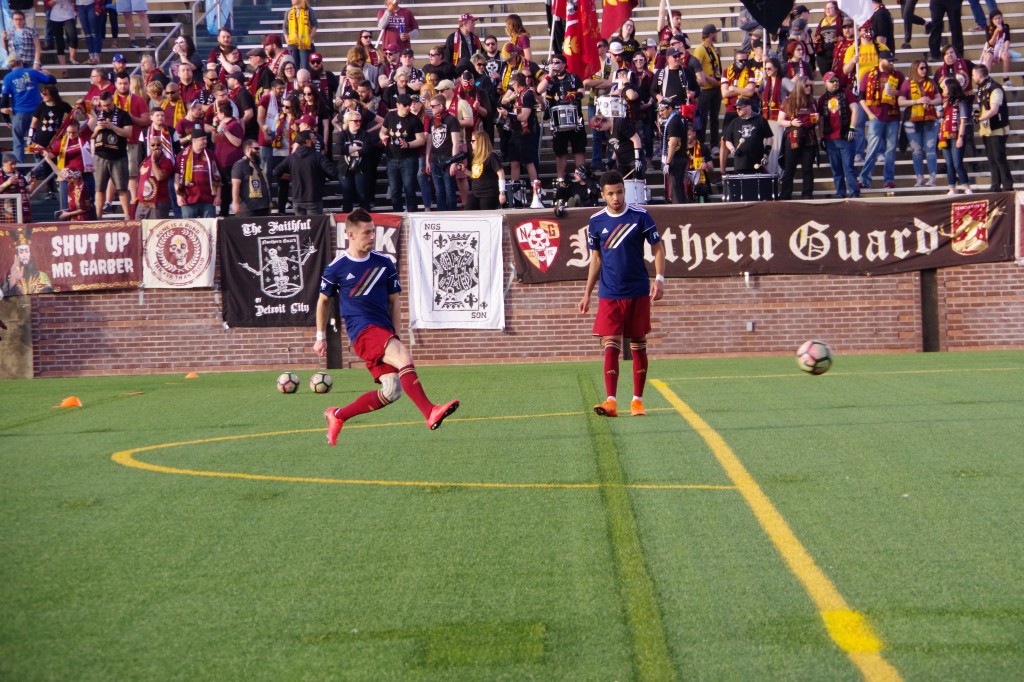 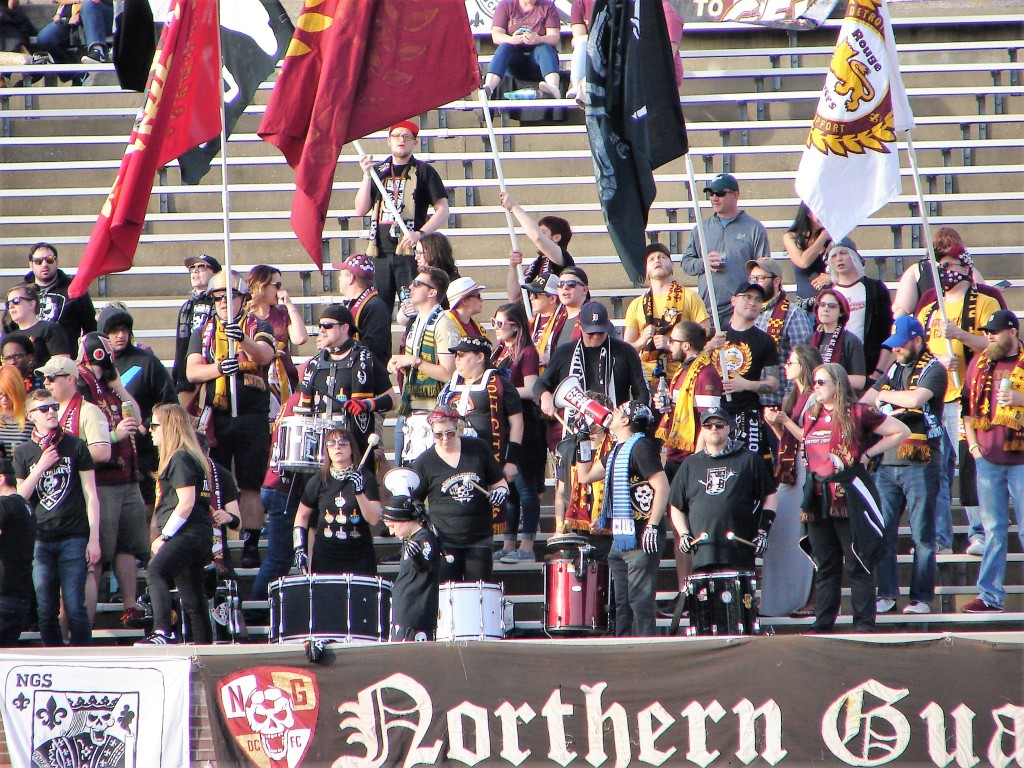 I find it cool in these pre-match photos that the Northern Guard Rouge Rovers were about one-half the size of the Chattahooligans.  Covering over 600 miles one-way, that’s a pretty impressive Rouge Rover showing. 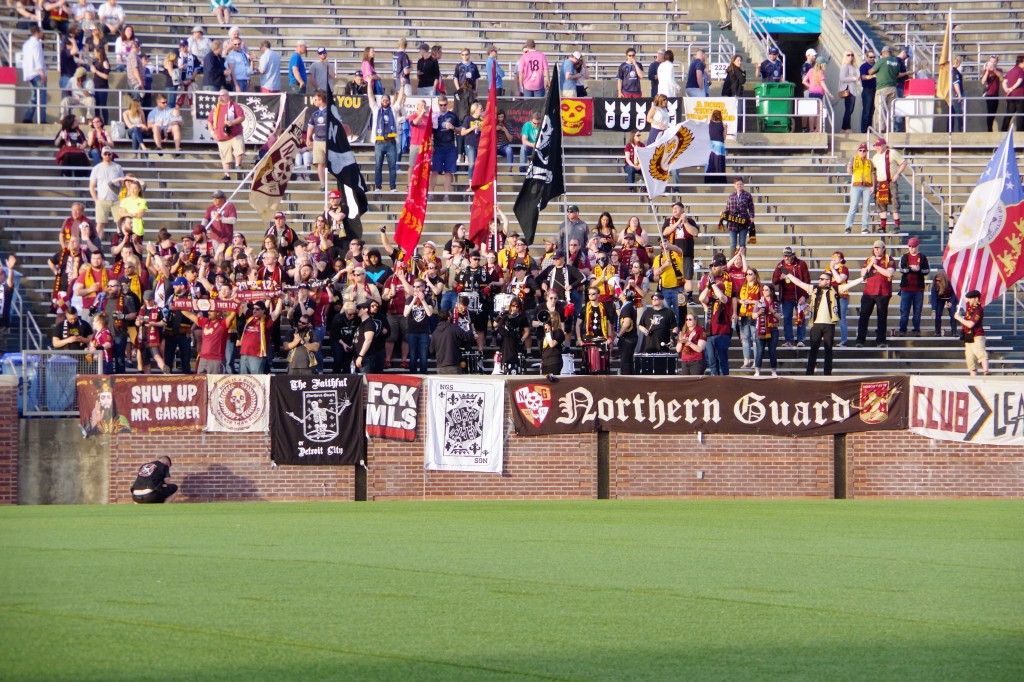 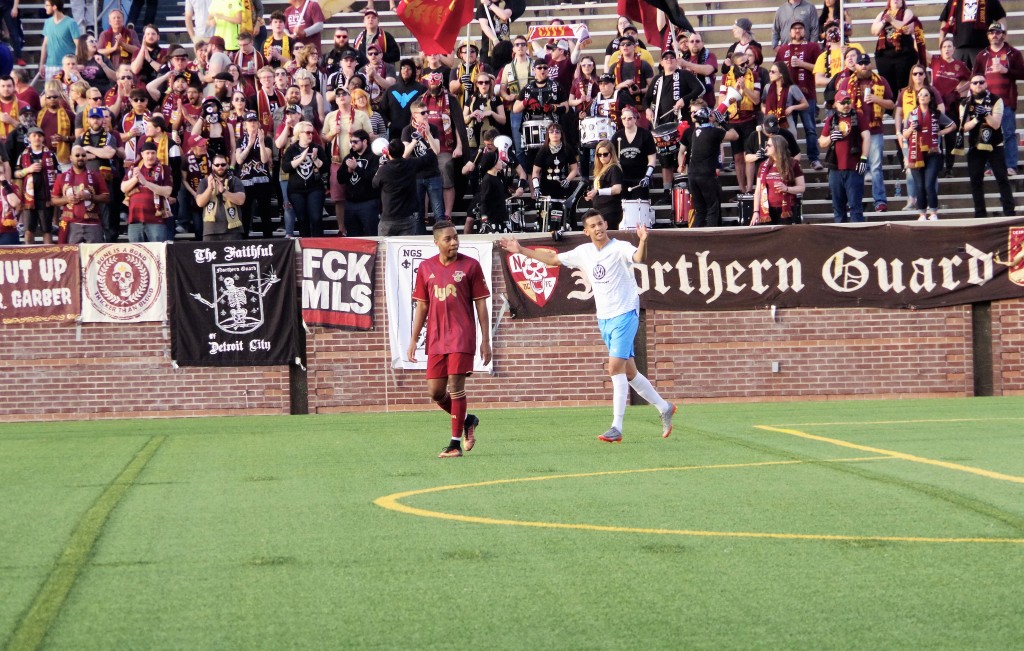 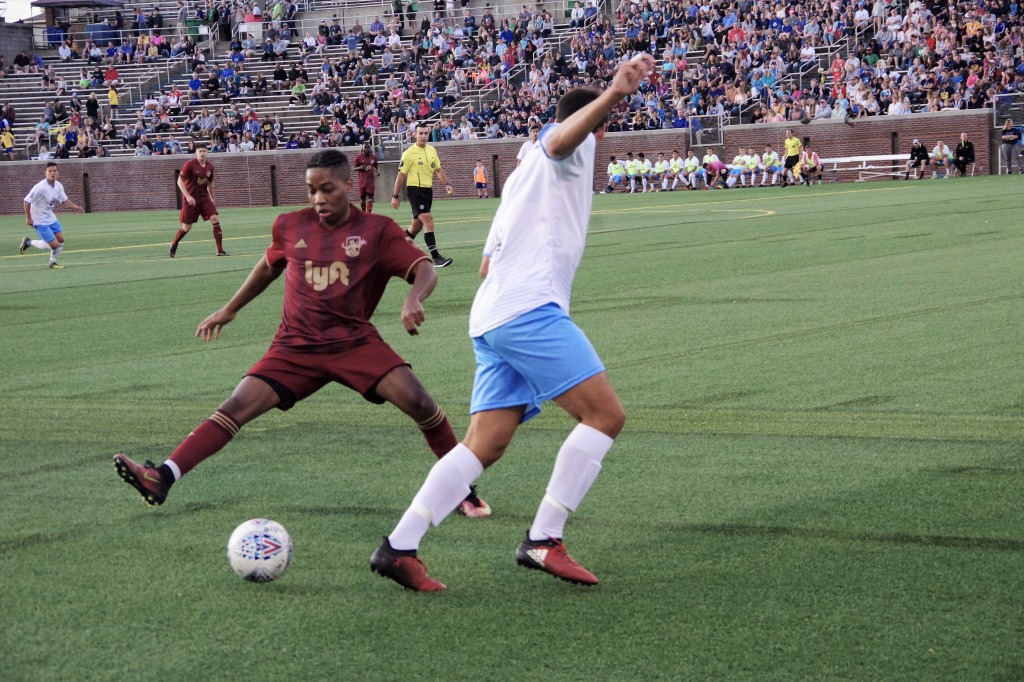 What’s a City match without a little Tetris.

The first half of the match was scoreless, largely because DCFC keeper, Nate Steinwascher was amazing.

In the second half, City’s Roddy Green and Shawn Lawson scored sixteen minutes apart.  Chattanooga’s Joaquin Cabello scored from the spot in the 90th minute, but it was too little too late.

Shawn Lawson mesmerizes the Chattanooga defender, slips past him, and scores! 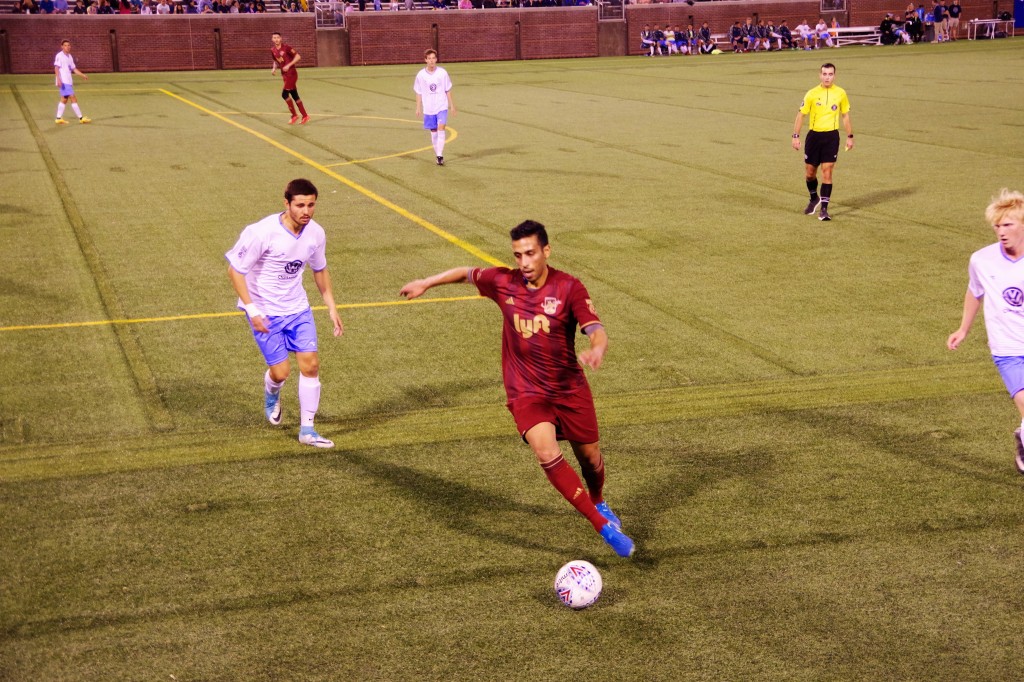 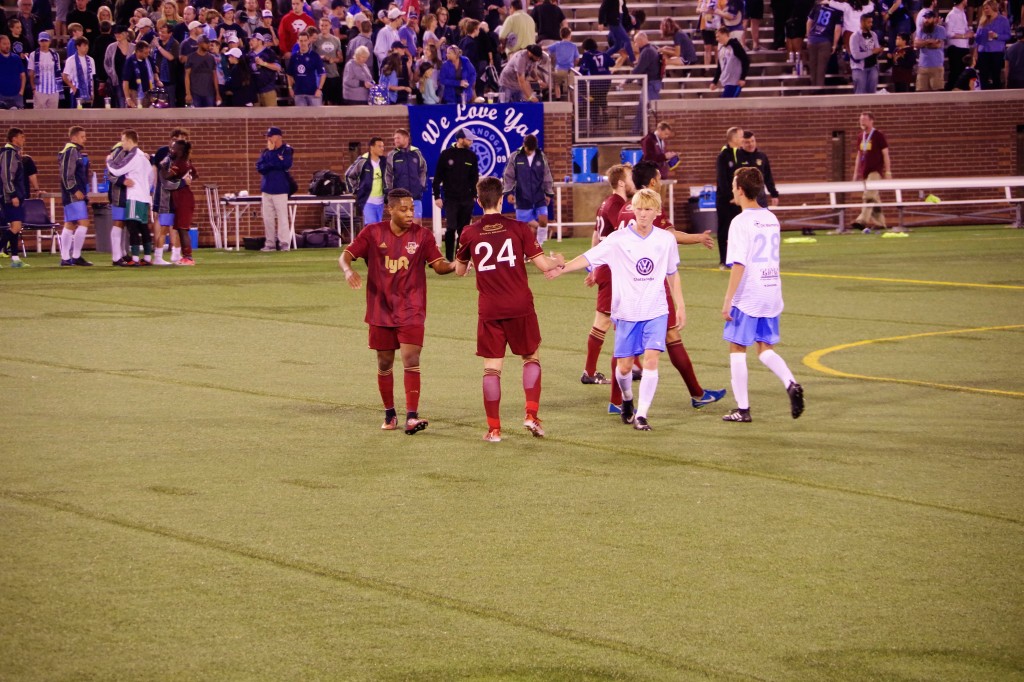 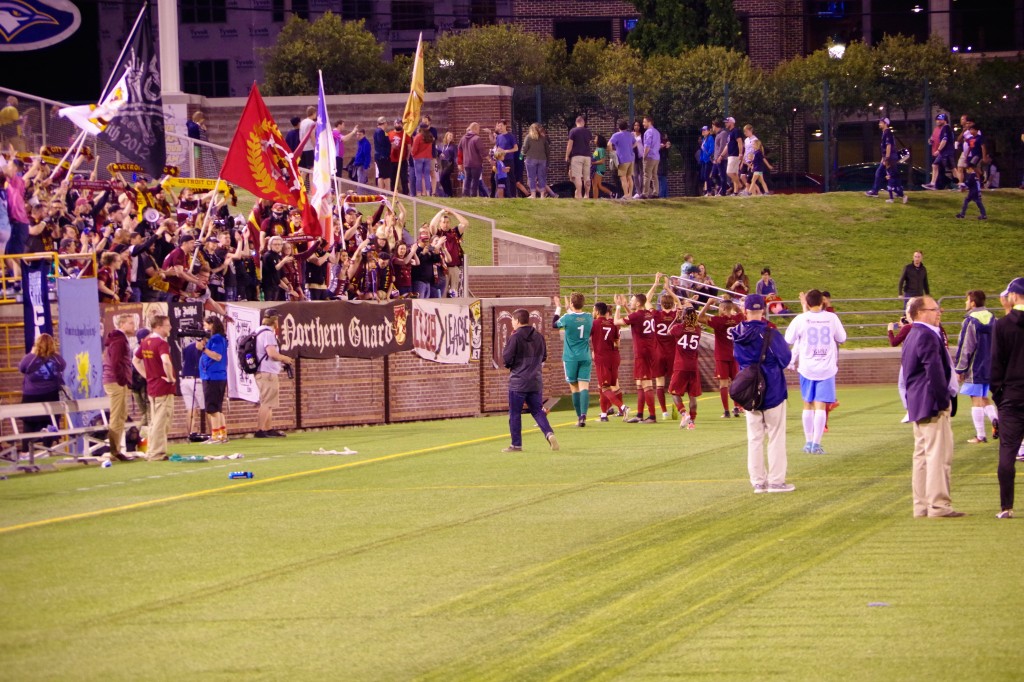 A fantastic evening in southern Tennessee.

This was the first match with my new Pentax K-70.  I thought I was going to have an issue with it, though.  When I read the Chattanooga FC website about its camera policy, I didn’t think they were going to let me in with it.  I wrote them an email and explained what I do with my photos, and not only did they let my camera in, they granted me a media pass.  Class organization as well. 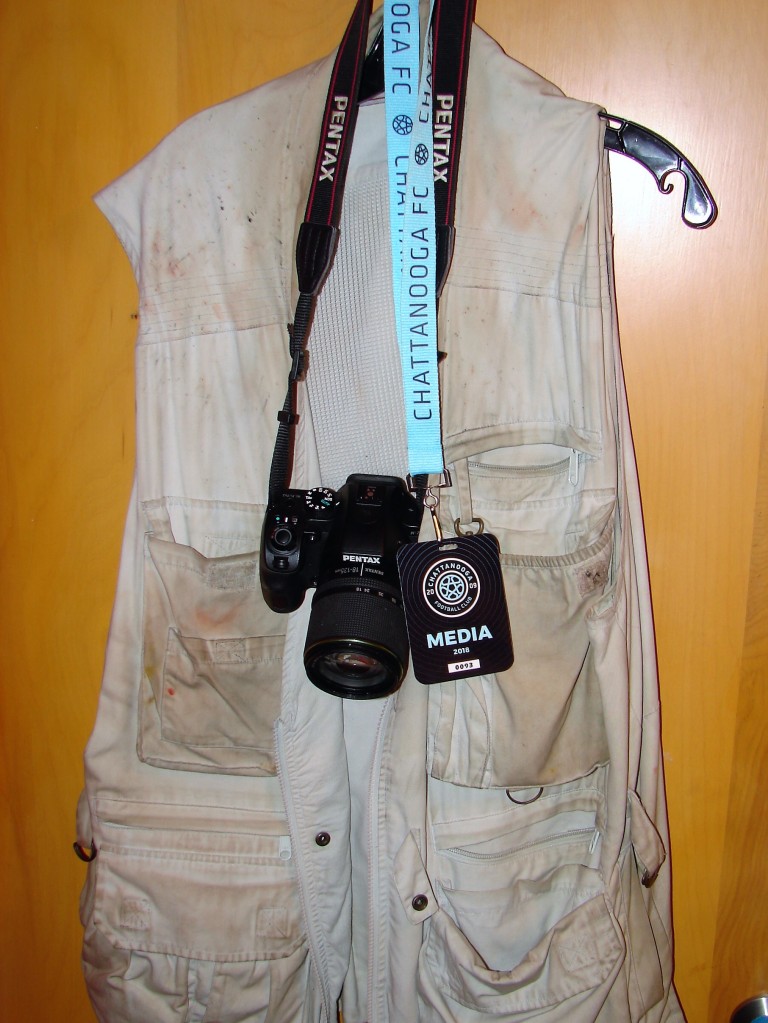